Watching the morning news with my 5 year-olds today, it was more than a little unsettling to see all that’s happening in Cairo. Even my children, who rarely think about much but that which affects them personally, were wide-eyed at the footage of the riots, burning in the streets and talk of death and destruction. Journalists were reportedly beaten with sticks and detained by pro-government security forces. Even the intrepid Katie Couric was swarmed as she tried to report from the scene and her cameraman maced as they filmed.

That said, it was unimaginable to see the Twitter stream this afternoon and talk on Facebook about Kenneth Cole and its abhorrent behavior. Using the unrest in Egypt as a springboard to promote their Spring collection seems to me just about the worst strategic move ever. Never mind a definitive step toward brand suicide.

Funny? No, not one bit. Especially to the people who are there, living through it. Or to the Americans and many folks of other nationalities who are desperately trying to get out of the country. Or to the families and loved ones of those people – who I’m sure aren’t getting much sleep these days.

This is a huge international crisis. The government in Egypt shut off the Internet for cripe’s sake. There are movements everywhere, trying to get information out – and in – and help keep people up-to-date and, more importantly, safe. And the Internet – and social media – has truly made this revolution even more revolutionary.

And yet some moron at Kenneth Cole thought it might be a good idea to take the situation in Cairo and capitalize on it. And, apparently, no one else in the organization thought that might be a bad idea. Or, maybe this is an instance of a brand using an intern or other inexperienced low-level staffer instead of an experienced, qualified marketing or PR pro to man their social media accounts. After all, it’s only the Internet. No biggie. Updated: When I wrote this, I overlooked the Twitter bio on the Kenneth Cole account. Thankfully, my friend Lisa Byrne, ever intrepid and clearly paying more attention than I was, pointed out that the tweet actually came from Kenneth Cole himself. Even better. A CEO who is clearly clueless.

Talk about Holy PR Crisis, Batman. This is enough to make me never buy a pair of Kenneth Cole shoes – or any other product from them – ever again.

What will be interesting now is to watch and see how they maneuver through the crisis they brought upon themselves. Will they bury their heads like BP and Tiger Woods, or will they stand up, like Etsy recently did, and acknowledge that they screwed up? Time will tell. And I predict we’ll soon know the answer. 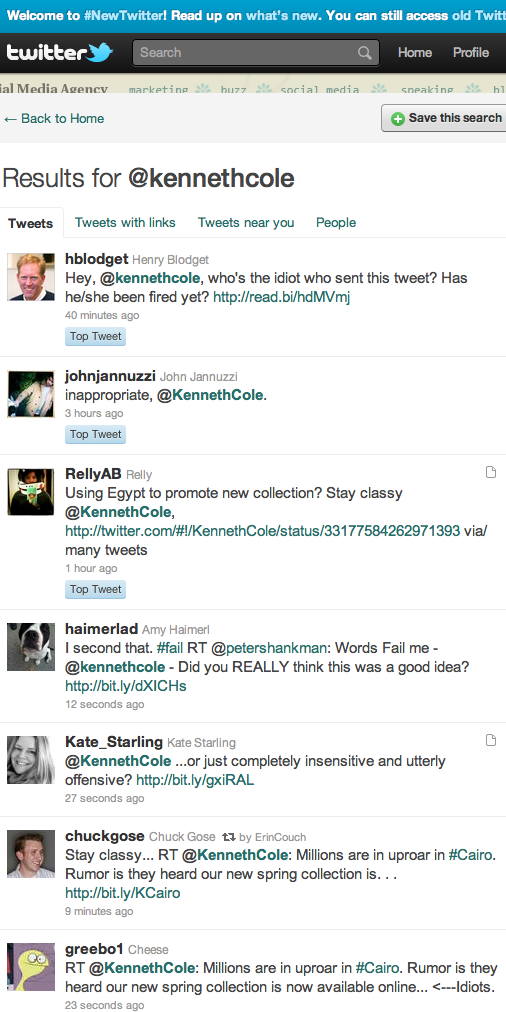 Oh, and by the way, two hours after the unfortunate and ill-thought Tweetage, Kenneth Cole updated their Twitter stream with this:

“Re Egypt tweet: we weren’t intending to make light of a serious situation. We understand the sensitivity of this historic moment -KC”

Update: Kenneth Cole removed the Tweet and posted the following on his Facebook page. Clearly, there are a number of ‘fans’ who aren’t interested in his apology. 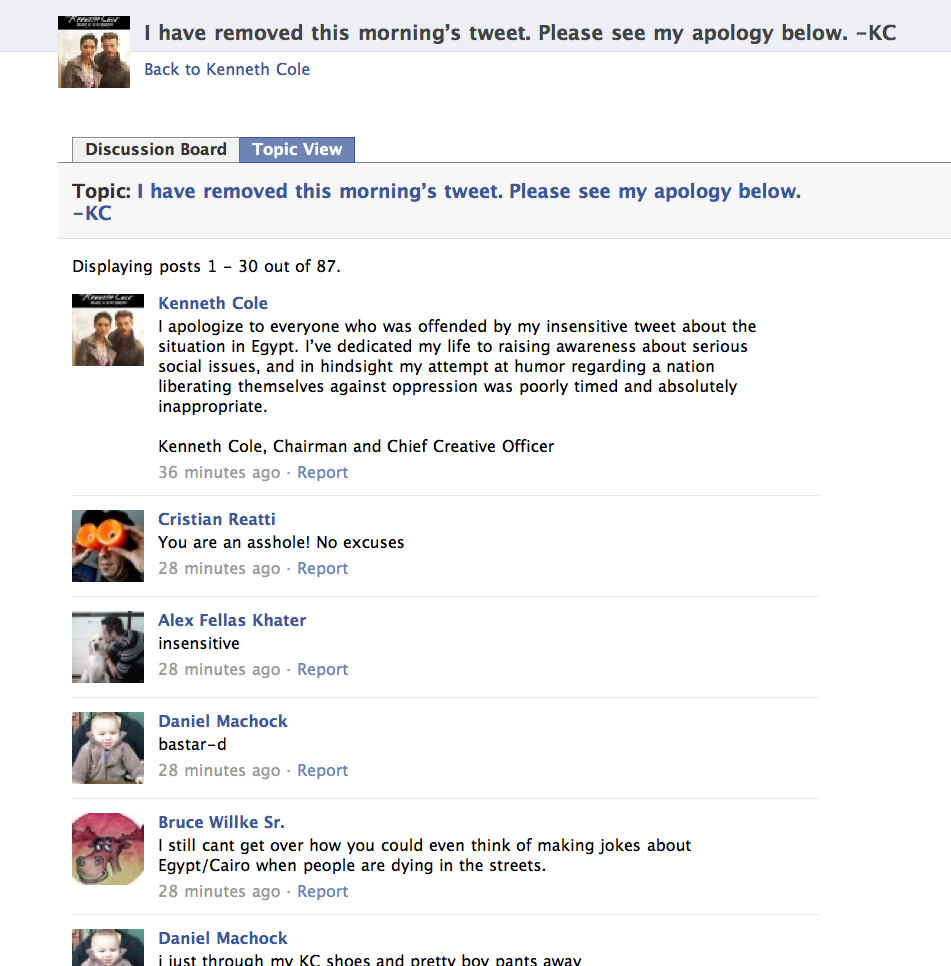