If you need a crash course (no judgment here), memes are an idea, behavior or style that spreads among people in a culture. In today’s digital world, a meme is a form of content that spreads virally–and can quickly achieve cult-like status. One recent example–Grumpy Cat, a cat with an hysterical angry looking face that’s spawned memes, merchandise, tattoos–the list goes on. In fact, Grumpy Cat’s popularity is so great that several friends attending SXSW this year reported that people waited in line for up to four (yes, 4) hours just to snap a pic with the infamous feline.

My good friend and mentee Ryan Cox and his friend Kat Krieger recently approached me with an idea called MemeToPrint, which is essentially a way for people to monetize memes in a timely and painless manner. I love ideas and I especially love entrepreneurs who believe in an idea enough to push up their sleeves and try and make it happen. And that’s just what Ryan and Kat are doing.

You want to know more, don’t you? Here’s a closer look at the concept. Let’s say you create a meme that you think is super fun and has the potential for some serious legs. Using MemeToPrint, you can go from an idea to a shareable link in minutes. And once the meme is live, you can attach it to a storefront where people can buy swag (t-shirts, sweatshirts, mugs, posters, shot glasses, throw pillows, etc.) emblazoned with your ridiculously clever meme.

What Ryan and Kat hope to do with MemeToPrint is to monetize all those likes, RTs, pins and repins. Sound like a pipe dream? Consider these powerful social sharing stats (and think of those numbers translated into money):

By lowering the barrier to entry, MemeToPrint allows for near real-time monetization of memes for the meme owner. Think about all the cute memes you’ve seen over the course of the last year or so—would you have bought a tee shirt or a coffee mug or some other inexpensive piece of swag for someone the meme reminded you of? I’m pretty sure I would. I think that Kat and Ryan might just be onto something and that there might be a marketplace for this kind of products. Especially once people get into it and start getting crafty. I asked Ryan to boil it down to a simple overview of their concept for me and here’s what he came up with:

From meme idea to making money the barrier to entry is too high. We wanted to make it dead simple to attempt to monetize a meme. This is Grumpy Cat before it became Grumpy Cat. Instagram made everyone a photographer and, in a similar fashion, our goal is to make it super easy for anyone to be a web store owner. How many memes cross your stream a day that have triple digit likes/hearts/favorites/repins/RT’s? Our goal, while aggressive, is to see if this idea has legs and to create a system to monetize the “love” on the web.

MemeToPrint is free to join and, even better, they handle all of the back-end payment processing and fulfillment. And once you find that irresistible meme and decide to participate, as the meme owner, you receive a commission off of any merchandise you sell. Bottom line: you can make money off of sharing your cool idea.

It’s an interesting idea, and I think Ryan and Kat might be onto something. That being said, I have some questions about the concept as a whole. My thoughts: How do you differentiate MemeToPrint from the Zazzle, CafePress and Etsys of the web? What if I want to take my meme off of your platform, do I own it? Can I grab a meme created by someone else and monetize it? Are there legal issues if I do? How do you protect a meme created by someone against others trying to monetize it? When are you going to stock women’s t-shirts instead of the crummy men’s tee style (a personal pet peeve)? What about kids’ sizes? I’d be more inclined to buy a fun meme-themed t-shirt for my kid than I would be for myself—have you thought about that? 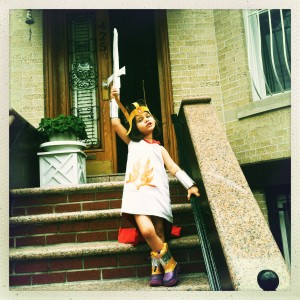 To better introduce you to MemeToPrint, Ryan and Kat graciously offered to let us run a contest. You can create your own meme using the picture at left and leave your meme content here, as a blog comment. At 5p CST on Friday, we’ll pick a winner to receive a T-shirt from one of MemeToPrint’s three meme lines. We’ll notify you that you’ve won and then have the MemeToPrint team mail you your winning t-shirt, at which time we hope you’ll send us a pic of you sporting your new apparel. Good luck!

And lastly, what do you think? Is this a crazy, far-fetched idea or something that you think has potential? What questions, above and beyond the ones I posed above, do you have about the whole idea? We’d love to hear them.

[UPDATE]: We’ve opted to extend the contest! You now have until 3p CST on Friday, April 19, to submit your best meme idea for the above picture. Leave your idea as a comment and we’ll pick a winner at 5p CST on the 19th. Keep the entries coming – we’re loving what we’ve seen so far!