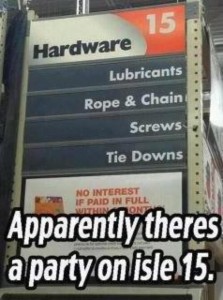 We love the Interwebs. And since we’re addicted to the Internet already, we thought you might enjoy a weekly post including some of our favorite links of the week. Some you might learn a thing or two from, some might make you laugh, and some—well, some might just be flat out ridiculous. What else would you expect?

We’ll typically cover items in five categories: Integrated Marketing, Social, SEO, Mobile and Ridicularity. Yes, I said ‘ridicularity’ … and I meant it! Without further ado, here’s our Best of the Web for the week of July 14th.

Ex-Google Employee Says Google+ Has Ruined The Company – Google once gave its engineers the time and resources to be creative. That experimental approach yielded several home-run hits like Chrome and Gmail. But Google fell behind in one key area: competing with Facebook. Insiders say (and the recent exodus of talent supports) that Google+ is killing the edge that Google had. It’s a poison pill. What do you think?

Email Marketing – Picture This: Acquisition Email That’s More Visual – Looking at the evolution of social media over the last few years, you can plainly see that social media sites are being driven by imagery. Consider Facebook’s Timeline (and its acquisition of Instagram) or the meteoric rise of Pinterest, and you’ll see evidence of a visual revolution. What are you doing to integrate more rich media into your marketing efforts? Hmmmmm.

Mark Cuban: Outwork and Outlearn Your Competition – So what separates the phenoms from the flops? Among several things, a passion for working hard and blowing their competition out of the water says Cuban. He goes on to shares tips for becoming successful and other things he believes to be differentiators. I don’t always love the person that is Mark Cuban, but it’s hard to deny that he’s got a point here. And some good advice.

Brewster, a Mobile App, Wants to Transform Your Address Book – A mobile application that aims to help people maintain the wide range of names and faces in their various social networks and keep in touch with them. It doesn’t want to be a social network, it wants to be a communications app that is trying to understand the context around your relationships and help you maintain them. We’ve played around with it and highly recommend giving it a try – so far so good. Contextual analysis. Two of my very favorite words. We’ll be keeping an eye on this one. For sure.

Southern Comfort Takes a Swig of Crowdsourced Video for Latest Ad Campaign – Through Poptent, Southern Comfort uses RezFX, a small production company in Indiana for three commercials. Each episode has a little different content in them distinguishing them from the other, but all of them have the same purpose: try to get people talking on Facebook about it, and then hopefully infect bars and liquor stores with the psychology of “bar calls.” What say you?

Big Brands Should Fear The ‘Dollar Shave Club’ Effect – Dollar Shave Club has a long way to go to prove it’s a real business. But lots of established competitors in profitable, sleepy market segments should take note:  you’re just one YouTube video away from being on the hot seat with your investors. How do you avoid being Dollar-Shave-d? Innovate, Segment, Differentiate and Evaluate.

Check These 6 SEO Tips Before You Submit A Press Release – A really helpful list of six things you should check before hitting send on your press release.  There’s nothing like a checklist to ensure success. Keep this list of six handy and we’re betting you’ll see better results.

Why These SMBs Say No To SEO – Rare is the small business that would not love to appear at the top of relevant Google search results. Yet plenty of those businesses think search engine optimization (SEO) is worthless. This is an interesting read as to why these SMB’s are quitting SEO. What do you think?

5 SEO Shortcuts to Avoid – You either believe in it, or you don’t. Count me in the believer camp, by the way. And if you’re a believer, it’s important to know which strategies are high-risk shortcuts that should be avoided. Based on an interview with Google’s head of webspam Matt Cutts, here is a list of five shortcuts you should avoid.

Perfectly Prune Your Notifications to Stop Your Phone from Constantly Bugging You – Here’s how to keep your phone from bugging you all day without turning your notifications off entirely—but still staying on top of what matters. We love this!

4 Keys to a Successful Mobile Campaign – The folks at Milo have done it again with this infographic, providing evidence that the low cost and great return on mobile marketing campaigns should be a strategy in everyone’s small business.

We can thank our wacky Facebook friends for the image of Fifty Shades of Grey and Home Depot, and pity the poor soul who has a great sense of humor but who doesn’t know how to spell the word “aisle.” Nonetheless, it was one of our big laughs of the week.

Sesame Street: Share It Maybe – The latest meme, it’s Cookie Monster’s version of Carly Rae Jepsen’s song “Call Me Maybe.” This has been all over the Internet … but if you’ve not yet seen it, you’re missing out. You’re welcome.

DC Shoes: Ken Block’s Gymkhana Five: Ultimate Urban Playground; San Francisco – Shot on the actual streets of San Francisco over four days, let’s just say we all wish we could drive like this.