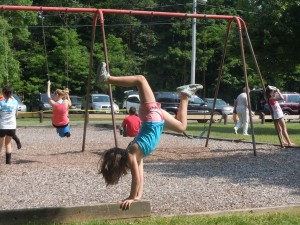 Does anyone else have Olympics hangover? Sigh, I guess the long-term waiting for the winter games will have to suffice for the next two years! But hopefully you’re getting a taste of some awesome pre-fall weather—like we are, so you’re out practicing your own balance beam acts at the park with the kids.

We always like to start the links of the week with a bit of ridicularity, so here goes:

In the realm of this might be the greatest ‘got you back’ prank ever, see how one smart kid opted to exact revenge on his brother.

And other news across the Web that caught our fancy? Well, here goes:

Salesforce aims to transform sales, service and marketing with a new collaboration platform. Basically an offshoot of Chatter, but adds functionality of public forums, helpdesk, and private groups. Communities aims to bridge the gap between social and business processes all under one roof. This is a big deal, especially as smart businesses move to integrate social into both the lead gen and the customer service areas of their businesses. Look for more of this kind of collaboration platform from other vendors in the not to distant future.

The U.S. Postal Service needs to make money – we all know know that. However, in a fairly dramatic move, the USPS is proposing to cut its rates for one of the nation’s top direct marketing companies. Smart idea or a move that gives unfair advantage to just one player? Oh, and the newspaper industry none to happy with this as the move would make a huge cut into its biggest moneymaker: the Sunday advertising bundle.

5 Tips For Being Naturally Good at SEO

If we had a nickel for every person that came to us asking questions about the importance of search engine optimization, we would be rich. And it’s safe to say that for almost every piece of work we do for every single client we service, SEO is a part of the equation. And yet so many businesses, large or small (not to mention agencies) really have no idea where to start wien it comes to SEO. This is a terrific resource and a tremendous starting point for entering the web world equipped with best practice SEO knowledge. If you are one of the people or businesses described in the foregoing sentences, please do yourself a favor and read it.

Twitter to Developers: Display Tweets Our Way or Else

Change are afoot at Twitter. And the powers that be at Twitter have made one thing very clear: they will make the only Twitter client apps from this day forward. For those developers of existing client apps, the changes (hopefully) will not destroy their businesses, but the reality is that no one knows that for sure. And if you’re interested in Twitter streams being integrated anywhere else on the Web, you might be disappointed.

We love the power of video as part of an integrated marketing strategy. And consumers? They love video, too. According to comScore’s Video Metrix, July saw 184 million viewers, which is a new record. And those viewers? Well they watched some 36.9 billion videos and averaged 1336.8 minutes of video per person (is this right?) also a number that continues to rise. Video advertising numbers are expected to be up and if you’ve not yet done so, it’s time you found a way to integrate video into your marketing efforts.

There you have it. Our best laughs and things you might want to read as you move into yet another week of living the dream. Hope your weekend has been a stupendous one.