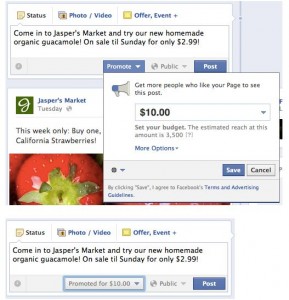 On the heels of rumors that Facebook is testing a feature that would let users pay to have their posts more visible in the News Feed, the social networking giant has unveiled promoted posts for pages.

The new “promote” button will give pages with more than 400 fans the opportunity to pay to have their posts promoted to a wider audience. Visibility of Facebook content is traditionally measured by the EdgeRank algorithm, which takes into account factors like affinity and time when determining what content will appear in a user’s News Feed.

Promoted posts, on the other hand, are an alternative to Facebook advertising while allowing page admins to extend the visibility of their content—provided they want to pay, that is. The minimum lifetime spend appears to be $5. Once you select “Promote post” and input your budget, Facebook will give you an estimated reach based on your spending.

You can promote existing posts, but only if they’re less than 3 days old. Although Facebook doesn’t limit the type of posts you can promote, the site does provide suggestions on what sort of content will work best with this new feature—offers, questions and exclusive news or information, to name a few.

Once you’ve activated a promotion, you can set several parameters, including the duration of the campaign and your payment method. You can’t specify a date and time when the posts will run, but you do have the option to stop the promotion and restart it manually.

As with any new feature, we’re inclined to test it first before making a determination. Given the news that individual users may be able to pay to promote their Facebook posts, it only makes sense that pages have that same functionality, too. And this could be a more viable and cost-conscious alternative for page admins to invest in the content that they feel merits a higher level of visibility but, for whatever reason, are reluctant to spend money for Facebook advertising.

That being said, we maintain that the most effective long-term investment is spent in creating a diverse array of quality content that keeps your audience informed and engaged. Still, the opportunity to spend a few bucks to promote certain posts that are especially time-sensitive and relevant to your audience seems like a worthwhile expenditure.

What are your thoughts on promoted posts? Will you be giving the new feature a try for your Facebook pages?