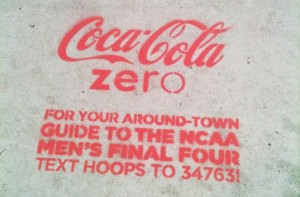 Coca-Cola’s guerilla marketing stunt, designed to capitalize on the remaining days of the NCAA men’s basketball tournament, backfired within hours, resulting in a widespread backlash from New Orleans residents.

A large number of New Orleans residents expressed outrage at the marketing stunt. In a letter to city officials, NOLAFemmes’ LunaNola wrote, “I ask, is this really how we want companies to behave when our city hosts national events?”

Coca-Cola was quick to apologize “and blamed the outside agency for exceeding its directions,” writes Michael McCarthy for USA Today.

“ ‘We’re moving expeditiously to remove them,’” said Kel Villarrubia, a Coke spokesman based in Jefferson Parish, as quoted in the Times-Picayune story. “ ‘We very much respect the integrity of our historic districts in New Orleans.’”

Villarrubia added that the beverage company didn’t give the ad agency the green light on the marketing stunt, a claim disputed by some.

“It’s a classic case of corporate cowardice,” writes Paul Lukas on UniWatch. “Outsource the dirty work to some small-times and then hang them out to dry when the shit hits the fan, all while feigning surprise and regret over the way things turned out.”

Interesting—the same thing happened with the Belvedere Vodka campaign that appeared to make light of rape. The brand didn’t take responsibility for approving the campaign and threw the agency anonymously under the bus. Funny thing, we work with lots of clients and can’t imagine launching an initiative like either one of these without full consent and approval from clients—before proceeding to execute. Is it really so difficult to screw up and just take responsibility?

What do you think? Does this kind of thing even make it to your radar screen or is it just me that gets crazy about stuff like this? Would love to know your thoughts.