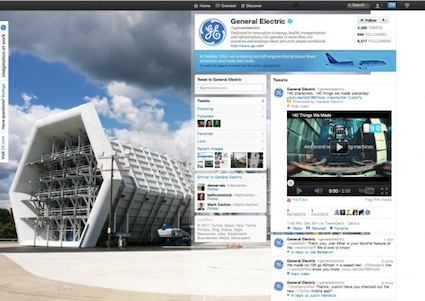 Big news out of Twitter headquarters—as part of a comprehensive redesign, the company has launched brand pages for business users. With this announcement, Twitter has become a more viable competitor against Facebook and Google+, two platforms that have made brand and business pages a visible component of their toolboxes.

The new Twitter brand pages offer businesses several options when it comes to profile customization, content and promotion. Features include:

Customizable header images. These new, larger images allow brands to better display their logos and taglines rather than solely relying on a customized Twitter background, which can sometimes be obscured by the tweet stream.

Featured tweets. Brands can opt to display a certain tweet above the stream, which will appear as a featured tweet. In addition to sharing written content, the featured tweet auto-expands to reveal an embedded photo or video from sources like Flickr or YouTube. In our opinion, this is a fantastic development when it comes to the lifespan of a tweet. If you have an important piece of information you want to share, or are launching a campaign, using the featured tweet gives your content a longer period of visibility rather than immediately being lost in Twitter’s fast-moving stream of conversation. Plus, the ability to include multimedia content allows you to share your message in a variety of mediums, creating a richer experience for your audience.

Separation between replies and mentions. As part of the new brand pages, @replies will be separated from @mentions. This allows brands and businesses to better monitor the ongoing conversation and promptly respond to consumer questions, concerns and comments, an especially important development for any brand that relies on prompt customer service.

Embed a tweet. According to a Twitter Developers page, the embedded tweets feature gives website owners the ability to generate copy and paste-able HTML mark-up that can render a tweet on any third-party website. “This markup presents a tweet in an attractive (and display guidelines compliant) way, and automatically sets up web intents so that viewers of the tweet may retweet, reply, favorite or follow easily from the rendered view.” Twitter website widgets have long been available so that website owners could incorporate Twitter streams into their site and/or blog design, yet embedded tweets takes that functionality to a new level, allowing site visitors to interact with the tweet without having to leave the site.

As with all totally awesome digital marketing developments, Twitter’s new brand pages are being slowly rolled out and aren’t universally available at this time. Twitter has launched the pages with 21 marketers, including American Express, Best Buy, Hewlett-Packard, Nike and Verizon Communications. According to Twitter, the new features will be rolled out over the coming weeks, so you may notice new tools like embedded tweets are available before the new brand pages.

If you want to take a tour of the entire redesign, check out this video from Twitter.

We like it. Except for the fact that a large number of Twitter users never, ever, ever tweet from Twitter. Like us, they’re using HootSuite or Seesmic or some other Twitter client, or they’re tweeting from a mobile device using a similar app. So chances are good that a lot of folks won’t ever see your pretty brand page.

Is that a good enough reason not to have one at all and to experiment with the opportunity this presents? We think not. After all, what’s there to lose with giving it a shot? We will. You?