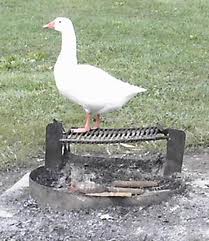 The other day I wrote about Cooks Source and the nasty spot they landed in as a result of their proclivity to swipe content from the Internet and use it at will. Thanks to social media, the blogosphere and a healthy dash of traditional media, the story has spread like wildfire. No matter how you slice it, Cooks Source comes off looking a bit bush league, to say the very least. If you’re not yet aware of the situation, you can read about it here, and while you’re there I won’t be at all offended if you hit that subscribe button. In fact, there might be some cupcakes in it for you.

A ton of other intrepid bloggers and reporters and other folks have written about this – most of whom have marveled at the audacity of Judith Griggs, the Cooks Source editor, as well the staff at the publication for letting what really amounts to rampant plagiarism slide.

And, because it’s the Internet and there are a lot of crazy people out there (and a lot of wicked funny ones, too), a fake Cooks Source Facebook page sprang up, as well as a fake Twitter account, both of which contain comments that are often highly amusing. But honestly, Monica, I digress (private joke, but if you check out the Facebook page, you’ll soon see what that means).

Today I saw a piece that my friend, Gini Dietrich, wrote about Cooks Source (which you should read if you haven’t) and it reminded me to check on them and see what might have changed in the couple of days since I wrote my original piece. I discovered that their real Facebook page has been taken down, as has their website, and the site has been replaced with this statement:

“We have cancelled our Facebook page on Thursday, November 4th, 2010 at 6:00PM. It has since been since been hacked by unknown parties and now someone else unknown to us has control of it. Their inclusion of Cooks Source issues and photos is used without our knowledge or consent. Please know that none of the statements made by either Cooks Source or Judith Griggs were made by either our staff or her.

We do not, and never have had a Twitter page, so what is attributed as our presence or our statements have nothing to do with Cooks Source or Judith Griggs.

We also cancelled our website on the above date, as our advertisers were listed therein, and with the harassment that has taken place on Facebook, we felt was unsafe for them.

Cooks Source will not be on Facebook again at any time in the future: hacking is too prevalent and apparently too easily performed by disreputable people. The email and Facebook abuse of our advertisers is the prime example: it is hurtful to people who are innocent of this issue, and can ill-afford the abuse — either emotionally or financially. Small business owners are being bombarded with hate mail, and distasteful messages because someone downloaded their contact information on these bogus sites. These small business owners work very hard to keep their businesses going in a bad economy. We respectfully request this harassment be stopped immediately. If you or anyone knows of this abuse, you should go to the bogus Cooks Source (or other bogus pages) Facebook page, look to the left side of the page and press “Report Abuse,” or else go to How to Report Claims of Intellectual Property Infringement.”

You can read the rest of their message here, but I’d guess it’s not an overstatement to say that this has been – and should be – a real wake up call for not only Cooks Source, but for businesses everywhere. Especially for small businesses. Are you listening?? As for Cooks Source, I’m pretty sure they won’t be swiping content from anyone else – ever. If they manage to stay in business. And I find the whole thing really very sad.

Content generation is the big buzz word these days and there are as many poseurs scrambling to position themselves as Content Experts as there were a year ago proclaiming themselves Social Media Ninjas. This should be a warning to all businesses out there to know where your content comes from. The old adage Caveat Emptor still stands. If you’re hiring someone to write for you, especially at some of the “bargain prices” I hear about on a daily basis, can you trust the work product they produce? Is it original or is it swiped from someone else? Are you protected? And what happens if there’s a mistake? What’s your crisis plan if something like what happened to Cooks Source happens to you?

But back to Cooks Source. The lesson here is simple. And no different than the ones I try and teach my four year olds on a daily basis. Here it is: If you mess up, don’t be snotty and say things you might regret. Be human. Own up to your mistake and make amends. When someone graciously asks for an apology, if they deserve one, give it to them. And if they ask for something reasonable, like blogger Monica Gaudio did, you should give it to them. Why is such a simple thing – like doing the right thing, so very hard for some people?

It makes me sad.