I’m eating my way through Austin this weekend (one of my favorite cities), and reviewing the things I’ve read and found interesting during the course of this last week. Lots of cool things going on: Facebook’s rollout of Sports Stadium, Twitter’s embedding Periscope videos in the timeline, differences between Millennial shoppers based on age, the IoT’s impact on travel brand—lots of good stuff. Let’s get to it.

When it comes to digital shopping, obviously we all have different habits. I thought a recent eMarketer article on the different spending habits of younger Millennials compared to older Millennials was interesting. Not surprisingly, data shows that digital spending by households headed by 25- to 34-year-olds was on average $49,547, where households headed by someone under the age of 25 averaged $32,179. For all households, the total digital spending was $53,495. I’d say this is as true of Millennials today as it is of any generation, ever. When you’re younger you typically have less income and less of an interest in spending it on non-essentials.

Here’s the chart, if you’d like to take a look:

No matter what anyone might say to the contrary, email remains one of the most valuable marketing channels there is—for businesses of all sizes. On that front, retailers most definitely agree. And collecting email addresses and building an email database is a critical component of successful email marketing.

Some eighty three percent of U.S. retailers surveyed by Yesmail reported that they collect email addresses on their brand’s website, and another 56 percent did so in-store and 55 percent through their social media accounts.

Once they have those email addresses they most often use customer behavior triggers—which include web browsing and email activity—to market to consumers. As you might expect, these trigged emails are typically more effective than average.

How the Internet of Things Transforming Travel Brands

If you know me at all, you know that I love the topic of how the Internet of Things (IoT) is changing the world at a rapid pace. Many businesses are focused on the integration of IoT into their operations, and the travel and hospitality industry is leading the way. Connected devices are impacting the way airlines, hotels, resorts, and car rental fleets do business and, while you may not be noticing it, these things are impacting the world of travel and hospitality.

For instance, airlines are using sensors to anticipate maintenance issues (before problems happen—yay!), manage fuel consumption, and track flight data. Large hotel chains and resorts are using connected devices to maximize efficiencies when it comes to systems operations—think of things like HVAC systems, room lighting, security, elevator systems, and other operational things that you don’t think about but which you experience in some way if you travel at all—especially if you’re staying at some of the larger hotel properties.

If you like thinking about the IoT as much as I do, here’s an interesting chart from the eMarketer article that shows spending on IoT by industry—

Is there anyone on the planet who doesn’t yet realize the power of video when it comes to overall brand awareness and the ability to reach and engage with a target audience? I doubt it. Here’s yet another survey that shows the value of mobile video advertising, and if you’re not yet embracing this, all the more reason to start.

Mobile video ad spending is growing faster than any other digital advertising format in the U.S., according to eMarketer estimates. Spending on mobile video advertising will grow more than 70 percent to reach over $2.5 billion. By 2019mobile’s share of total digital video ad dollars is estimated to reach in excess of 47 percent. 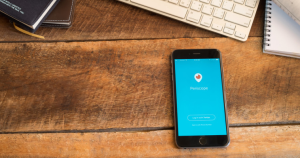 Twitter Begins to Embed Live Periscope Videos in The Timeline

In a smart move, Twitter has implemented the embedding of live, auto-playing Periscope videos right in your timeline in Twitter’s iOS app. Just like in the Periscope app, broadcasts can be replayed for up to 24 hours.

This will likely significantly increase the overall visibility of Periscope content and encourage more people to use the app, since the content will be viewable whether or not your Twitter account is linked with Periscope. Now if only there was a way to factor out Short award nominees from humble bragging and begging for votes….

For now this only applies to Twitter’s iOS app. Android and web support is said to be coming in the near future.

Ah, Facebook. Always doing something new. I like it. The new thing this week is the announcement of the launch of “Facebook Sports Stadium,” designed as a hub for Facebook users to follow games live along with their friends. Kind of sweet.

Along with live coverage of sporting events, play-by-play commentary from the users’ friends as well as sports journalists, analysts, teams and leagues, Facebook Sports Stadium offers a myriad of stats, player profiles, game schedules and other related information. The content is posted chronologically in real time. I think the whole thing sounds really cool.

It’s currently only available on Facebook’s iOS app, and launching with coverage of the NFL (timely indeed), and will no doubt soon add other sports, including basketball and soccer. According to Facebook, among its roughly 1.5 billion users include 650 million sports fans around the world, so there’s plenty of potential demand. Did I mention that this excites me?

YouTube: Humanity’s answer to “how do I do something?” …. am I right?? Well, that might be the way it’s been, but with all the other video (like video that’s native to Facebook, for example) and live-streaming options out there, I think there’s a chance we’ll see less reliance on YouTube, and reduced spending on YouTube video, moving forward.

As I suspected, not every brand is increasing its digital video ad spending. Lowe’s, The Home Depot, CVS, and Amazon were among those decreasing YouTube spending. In fact, in Q1 2015, Amazon spent about $1,741,000 on digital video advertising on YouTube. By Q4, the company only spent $162,000.

According to eMarketer, growth in YouTube’s U.S. video ad revenues will drop over six percent in 2017. During this time, YouTube’s share of the video ad market is also expected to recede. This will be interesting to watch, for sure.

In case you’re not yet paying attention, Snapchat is the platform to watch in 2016. Why? The people are there! In fact, Snapchat just surpassed Facebook in photo uploads, coming in at 400 photo and video uploads daily. That’s no small accomplishment! Not surprisingly, ad buyers are now trying to figure out how to integrate Snapchat into their media campaigns.

Cowen and Company polled U.S. senior ad buyers about ad plans for and asked them where they plan to begin advertising in 2016 and 22 percent of senior ad buy said they plan to advertise on Snapchat this year for the first time. Not to be left out of the action, Instagram and Pinterest are starting to factor into those plans as well. I predict we’re going to see a strong focus on Instagram advertising in the coming year as well. Here’s the chart if you’d like to take a look.

Kung fu fighting — as only my children can do