Here is the latest edition of “Things You Need To Know This Week.”

A research study from Epsilon asked Internet users in the U.S. about where they’ll be looking for deals coupons this holiday season and every available option was more likely to be chosen by women than by men.

The top choice overall was to use coupons that came in the mail, with women 22 percent more likely to utilize them than men, and online price comparisons were more popular among men.

For retailers planning to send coupons out to shoppers over the holidays, women will be the better targets for most of these offers. And for men, a different type of promotion may be more effective.

Shoppers Are Generally Satisfied With The In-Store Grocery Experience

Field Agent surveyed U.S. grocery shoppers in urban areas that had been selected as test markets for grocery pickup services and found that a 75 percent of respondents thought the selection in grocery stores was “very” or “completely” acceptable. Sixty percent said the same about the convenience of in-store grocery shopping.

However, the in-store experience wasn’t all sunshine and roses. Respondents were somewhat less satisfied with the customer service, prices and amount of time it took to shop at grocery stores. Most respondents were at least moderately likely to be open to using a grocery pickup service in the future, but their interest in such services extended only to nonperishable goods.

This is interesting to me. I visit my neighborhood grocery store on average about two, sometimes three, times a week. Customer service, especially at the deli counter, is deplorable, but still I shop there. I also am starting to buy more and more groceries from Amazon Prime Pantry, and that’s a big convenience. But I also love to cook, and think about how I’ll craft a dish as part of the shopping process, so I can’t imagine not visiting my store in the real, on a regular basis. However, I see a future in the U.S. where many consumers realize the benefit, the convenience as well as the time savings, in a grocery pickup (or delivery) service. What about you?

A recent Millward Brown Digital survey found that 43 percent of U.S. smartphone owners use four to six apps on an average day compared to the 40 to 70 apps they have installed. That low usage rate is just for apps users keep.

The same study found that 72 percent of smartphone owners deleted an app because they rarely used it. Other causes of deletion were because the app was draining the device’s battery, as well as a need to free up memory on their smartphone.

Looking to combat deletion and lack of usage, many app marketers have been turning to app retention, a metric used to gauge how valuable an app is to consumers.

Only third of both Android and iOS users re-launched the app after a day, showing that engagement significantly decreased just 24 hours after the initial install. By day 30, only 3.3% of Android users and 3.2% of iOS were still engrossed with the app. This is so very true. I was just today deleting unused apps. What about you? Think about your downloading and subsequent use of apps—do these findings ring true for you?

According to research by Vision Critical, just over 50 percent of U.S. Internet users have participated in the sharing economy, up 12 percent over last year.

Usage was up in several sharing-economy categories, the survey found with 44 percent of Internet users in North America having bought pre-owned goods and 17 percent having found space to stay via the sharing economy, up from 34 and 7 percent respectively.

Retail TouchPoints found more than 70 percent of retail executives surveyed worldwide said their firm had an email strategy to drive social commerce and another 21 percent planned to create one.

Among those without a strategy, almost all still thought social commerce would be relevant to their audience. Fifty percent were still working on their general ecommerce strategy with social being put on the back burner.

Those who did have a strategy were most likely to rely on email for promotion. Fewer than 50 percent planned to publicize their social commerce initiatives on their own ecommerce sites, while 30 percent would do so in their store.

Dropbox has announced Paper, a collaborative document editing platform in your browser. It lets you edit a document in real time with your Dropbox contacts.

Compared to Google Docs or Quip, it doesn’t have any rich-text editing features. You can just type blocks of text. If you want to format your document, you’ll have to use another word-processing app.

Will Google Docs users switch to Paper to do something they can already do with Google Docs, without the nice embeds? I’m not sure. But it’s worth checking out, I suppose. Paper isn’t available just yet, but if you’re interested, sign up for the waiting list. 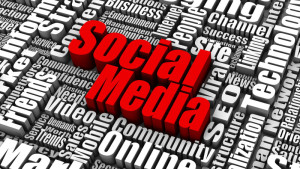 Two-Thirds Of All Americans Now Use Social Media

According to The Pew Research Center, 65 percent of American adults are social media users.

In 2005, only seven percent of Americans were on social networks, not surprising since Facebook was founded in 2004 and was restricted to college students until 2006.

Facebook has been experimenting with video a lot lately. One of the more interesting of these experiments is a dedicated video tab that shows all the videos shared by people and pages someone follows.

In addition to the dedicated tab, Facebook is also testing other video features including “Suggested Videos,” a YouTube-like way of surfacing videos that you may find interesting based on what you’re currently watching. It’s also testing a way for users to watch while still having access to the rest of the News Feed. And finally, it’s experimenting with a save button for those moments when you can’t watch a clip and would like to bookmark it for later viewing. 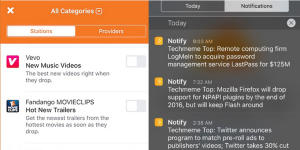 According to a report by The Awl, an upcoming Notify app allows Facebook users to aggregate notifications from various publishers on recently posted stories or content.

Notifications options appear to be divided into both ‘providers’ (likely publishers and content creators), as well as ‘stations,’ which appear to be specialized collections of stories or content within each publisher. Your home screen will more likely be a feed of stories and content.

Notify appears to be launching within the next month, and previous reports indicate that publications have been trying it out since at least August.

Twitter is opening up its Amplify program with a new option that should appeal to a wider array of advertisers looking to run pre-roll ads on the platform.

Advertisers will be able to bid on categories of videos and add additional audience targets on top of those categories. Twitter will serve pre-roll ads into the most topically relevant videos being watched by the advertiser’s target audience.

The beta is open to a select number of publishers and advertisers in the U.S. Twitter plans to expand globally.

After experimenting for about five months, Snapchat’s ‘Snap Channel’, which featured original content created in-house, is shutting down, according to Deadline.

In a statement to Deadline, the company said, “Given that we are winding down the Snap Channel, it’s natural that Marcus would want to explore other opportunities. He is a tremendous talent, and we wish him well.”

YouTube Shopping Ads were also recently released and are a new advertising format that allows users to click on and buy products directly from videos. And Facebook launched its own Buy button for its News Feed this summer.

Bath Baby Is Surprised Every Time