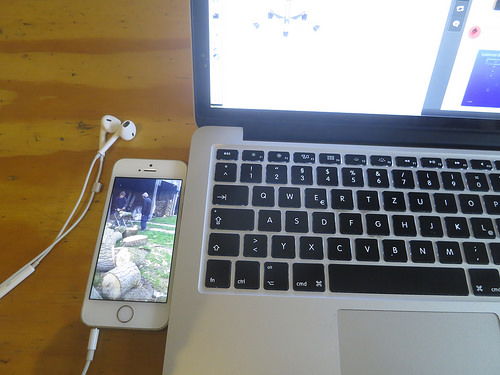 People, including me, have been railing against shooting vertical video, well, pretty much forever. But I’m going to eat some crow here and say that when it comes to this topic, I think the masses are winning out. Vertical video is, quite likely, becoming the new standard.

Here’s the deal. Moving visual images have been around for well over a century. From traditional motion pictures shot on film, to the invention of television, to today’s digital video platforms like YouTube, the presentation of visual content has constantly evolved as technology has advanced.

One thing that hasn’t changed much is the standard that video is presented in–a horizontal or landscape format. Early films and standard definition (SD) television used a 4×3 format. Transition to the present and we have wide screen movies and HD video presented in a 16×9 format. As a result, video, movies, and TV have been horizontal ever since. Until recently, that is.

I don’t know when or where it started, but I suspect it was with the launch of smartphones with high quality built-in video cameras. A smartphone is a vertical device. People are used to holding it vertically. As such, it only makes sense that people take photos and shoot video vertically. They don’t know any better—it just makes sense. No matter what you’re trying to capture on video, our natural tendency is to grab your device and hold it in a vertical position. It’s only when you post your video to YouTube or Facebook that you [might] realize that it doesn’t look so cool and that you have two thick black bars on the left and right hand sides.

The Debate About Video

This whole vertical video issue begs the question: Are you doing it wrong if you shoot vertical video? To traditionalists like me who are accustomed to watching video horizontally, vertical video seems ridiculous. After all, your eyes are horizontal on your face, not vertical. However, as streaming live video becomes more and more commonplace, vertical video makes all the sense in the world. After all, it fits the ergonomics of how you hold your phone. And it takes only one hand instead of two (if you happen to have a larger-sized device like an iPhone 6+).

Live streaming services like Periscope and Meerkat have only added to this debate., as both of those platforms are optimized for vertical video. Periscope is expected to introduce the option to shoot videos in landscape or horizontal mode soon. I’m not sure if that will make a difference in getting users to turn there phone sideways to shoot video. YouTube even made a change to its mobile app to better display vertical videos when played full screen, an acknowledgement that vertical video isn’t going anywhere any time soon.

Live streaming and shooting video on your mobile device is still relatively new and is evolving rapidly. The standards and norms are being created on the fly. Like any new technology, the only thing that is certain is that it will be different tomorrow. Does this mean vertical video is the new standard? I don’t know. I prefer the traditional way of watching visual content in landscape. After all, your eyes are arranged horizontally on your face, it makes sense to view video the same way. But if I’m being honest here, I think the vertical video fans are going to win this one. What do you think?

More resource on the topic:

Vertical Video on the Small Screen? Not a Crime
How to Optimize B2B YouTube Pages [and Why You Want To]
It’s time for marketers to adapt to vertical videos