Well, it looks like Shelly’s officially flown the coop. Word on the street (well, on Facebook, anyhow) is she’s having a wonderful holiday and doing lots of oceanside running. Lucky lady, but I suppose she’s earned it. 😉

Hopefully you’re enjoying a holiday as well, or at the very least having a lazy sunny Saturday relaxing on the deck. Put your feet up, because in this edition of “Things You Need To Know This Week” we take a look at brand engagement, share some surprising data about millennials, see how the Apple Watch is doing in the rankings (hint: very well!), and get up in arms over Twitter’s recent background changes.

In a trend I hope becomes the norm, quality seems to finally be winning out over quantity, at least where lead generation is concerned. A July 2015 study by Ascend2, found that 70 percent of B2B marketing professionals surveyed said that improving the quality of leads was the most important objective for an effective lead generation strategy. Nearly 60 percent cited increasing sales revenues as most important.

Email and website or landing page marketing were cited by 48 percent and 44 percent respectively as the most effective tactics for lead generation. Content marketing came in third. Uh oh, might time to look for a new job! Paid search, online advertising, and testing and optimization came in dead last, seen as the least effective tactics of the bunch.

When it came to measuring lead generation performance, the most useful metric cited was “sales qualified leads generated,” which Ascend2 noted was useful for measuring how well B2Bs were doing at improving lead quality.

Personalization Efforts Still Rely on Basic Data for Most Marketers

In a classic “just the facts, ma’am” scenario, it appears marketers continue to rely on the basics when it comes to personalizing their marketing efforts.

A surprising revelation was that that 80 percent of marketers worldwide said they didn’t understand their customers beyond basic data such as demographics and purchase history and 96 percent said it was challenging to build a comprehensive single view of a customer. As an marketer.com article says, “…(this is) a major problem when one considers that more than six in 10 marketers worldwide surveyed in March 2015 by Signal said they couldn’t personalize customer experiences the way they wanted to due to fragmented data/profiles.

Obviously, especially in the era of big data, marketers today need to learn how to better gather, integrate, and act on more advanced data. Numbers like 36 percent and 47 percent of marketers saying their data-related marketing investments were positive or somewhat positive aren’t very high. There seems to be a lot of marketers out there who are missing out on data marketing opportunities.

Whether you’re a fan of influencer marketing or not, social promoters drive more brand engagement than run of the mill social media users so. The number of social media “like’ers, followers and sharers” worldwide is high, BUT, only 19 percent of those surveyed (by Social@Ogilvy,” said they would actively recommend brands and products to family and friends. And those are the people you want in your camp.

Nineteen percent might seem like a small number, but consider the differences social promoters bring to the table:

So, if you’re looking for high quality folks to start engaging with on social, seek out promoters. And let’s stop turning our noses up at influencer marketing.

Surprisingly Millennials Aren’t So Mobile When it Comes to Shopping

Ok, I’m no millennial (Lord knows!) but I’m fairly tech savvy and do a lot of web shopping. Like, A LOT. And there’s NO WAY I would make a purchase on my smartphone. And, it appears I’m not alone. It’s not only millennials who aren’t using mobile to buy.

According to a recent emarketer.com article, “…35 percent of the younger set who were polled by MocoSpace and Social Lens Research said they would like to buy more on their phones but that it was too hard. Similarly, in a January 2015 study by Fluent, 36.4 percent of US smartphone users ages 18 to 24 said mobile shopping was only easy some of the time or never easy, as did 38.7 percent of those ages 25 to 44. However, these figures weren’t all that different from respondents in older age groups: Around 48 percent of those ages 45 to 64 and 65 and older said the same

That said, though, millennials are more likely to use use smartphone shopping apps than us old people. In research conducted by King Retail Solutions in late 2014, 61 percent of U.S. millennial smartphone owners had downloaded at least one shopping-related app. Older age groups were less likely to have downloaded apps with only 50 percent of Gen Xers and 40 percent boomers having done so.

Now, if you’ll excuse me, I’m off to sephora.com for a little retail therapy 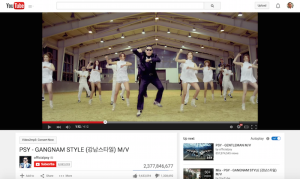 According to a TechCrunch report, this has been YouTube’s fastest growth rate in two years.

OTT Devices Bring Hulu Viewers Back to the Couch

Are we heading back to living room? According to recent research from Hulu, the answer is a resounding yes. The video-on-demand (VOD) service reported that their share of U.S. Hulu viewers on over-the-top (OTT) devices grew from 44 percent to 58 percent from Q1 2014 to Q1 2015, and, more importantly, viewing on desktops and laptops saw a huge drop, from 41 percent to 24 percent. The share on mobile devices held relatively steady.

Other research indicates a rise in digital video viewing via OTT devices in general. A 2015 study by Digitalsmiths found that over 42 percent of adult internet users in North America reported using a TV-oriented Wi-Fi enabled device to watch digital video content, up 8.1 percent over last year.

Apple is now the dominant smartwatch maker in the world with shipments hitting 4 million units last quarter, according to a forecast released this week by Strategy Analytics. While Apple is being coy with their numbers, assuming the data is accurate, that means Apple now owns 75 percent of the global smartwatch market. This contradicts concerns expressed by other analysts that the launch of the Apple Watch was actually weaker than expected.

During Apple’s recent earnings call, CEO Tim Cook said that “sales of the Watch did exceed my expectations, despite supply trailing demand at the end of the quarter.” Cook added that the Watch saw its highest sales in June in the wake of fears that demand has been dropping which seems to correlate with the findings of the Strategy Analytics study. 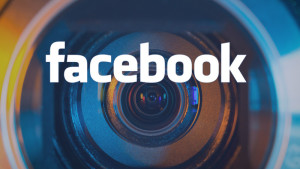 Facebook is all about video domination lately, and just this week announced a new set of tools to help video publishers control and manage their video content.

Key features of the newly announced tools include:

These updates bring Facebook creeping closer to YouTube functionality, and they are also introducing a new Video Library so Page owners can manage all their uploaded videos, and allowing them to edit videos individually or in bulk. Expect to see them being rolled out worldwide to Pages “over the coming weeks” according to Facebook. 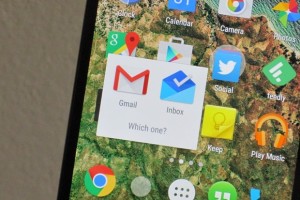 Remember the halcyon days when having a Gmail account was kind the cool, “in thing?” Well, those days appear to be over. Google is testing a new service that lets users get rid of their @Gmail addresses for custom ones, but, as with most things in life, you have to pay for it, at a cost of $2.00 per month.

According to an official statement from the company, “We know that your first choice of username probably wasn’t yourname384756368@gmail.com, which is why we’re experimenting with scalable ways to provide other options. This is just a test though, and we haven’t made any decisions for the long term.”

Google Plus Photos Shutting Down August 1

And in more Google news, say bye-bye to Google Plus Photos as of August 1. This move will hit Android first followed by iOS and the Web “soon thereafter.”

This can’t be much of a surprise, as many Plus users have been being prompted to switch to the new Google Photos service, and have likely already made the switch.

According to thenextweb.com “Google says those still using Google Plus Photos should download the Google Photos app soon “for uninterrupted access to all your photos, videos and albums.” If you fail to switch ahead of August 1, Google says you can find your photos and videos at its photos portal, and they’ll be available for export using Google Takeout.” 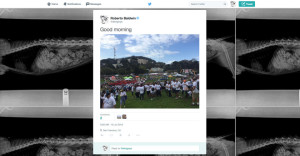 MY CLASSIC OLD MIX TAPE WALLPAPER IS GONE!! This makes me very sad, and I’m not the only one. There was much kvetching this week after Twitter “went white” this week. A Twitter spokesperson told Engadget, “we’re removing background images from the home and notifications timelines on web for all users. Now, background images are only available where logged-in users will see them publicly (Tweet pages, list pages and collections pages.)”

While Twitter has not offered any additional comment, this could mark the beginning of the end for all custom user uploaded wallpaper backgrounds in favor of a more consistent, albeit plain, looking Twitter experience. So, my Twitter wall will now be void of any of my personality (well, tweets aside), and just as boring and bland as everyone else’s. Yuck.

This guys knows how to get his “Uptown Funk” on!