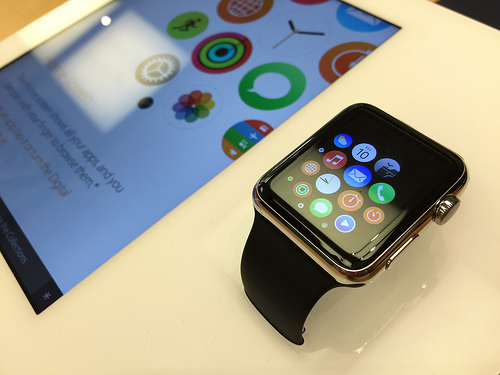 June’s here (how did that happen?) and the technology news just keeps on coming. Google recently hosted its annual I/O conference in San Francisco and one of the more interesting announcements from that conference was a new video and photo storage plan called Google Photos. The free service promises unlimited storage for all your visual content and some cool auto indexing features. Sounds like this could force Apple to respond with something similar at their World Wide Developers Conference happening June 9th. I still maintain that owning your own content, in other words storing it on your own computers for safekeeping, is the way to go, but with more and more imagery taking up more and more space on devices, I can see where this would be attractive to many.

It’s Saturday. I’m drinking coffee (mmmmm) and clinking my cup to you. Put your feet up, and enjoy the latest edition of “Things You Need To Know This Week.”

Consumers Will Share Personal Info For Rewards Within Limits

It not news that consumers these days want privacy…and they want personalization. As you and I both know, those two things don’t play well together. Here’s where the numbers lie. MarketingLand.com reports “that 60 percent [of consumers] indicated they prefer offers that are targeted to where they are and what they are doing, but 62 percent said that they do not want retailers tracking their location.” Ha!

The numbers were consistently high across the board when it comes to sharing personal data in exchange for incentives to buy – with a cash based incentive coming in at a very positive 99.6 percent. And, while consumers are getting hip to the digital marketing game, and understand they are being tracked, they still feel they should be asked first. In addition, the reason you are asking for that permission must make sense to them.

As mentioned in the article, it’s almost come down to “informed consent.” Something to keep in mind when you’re crafting your call to actions and lead generation campaigns.

Social is a Great way to Promote Events According to Survey

In another “dog bites man” survey, Maximillion Events is reporting that social media may be one of the best ways to market your next event. Of those surveyed about how they use social media for their jobs, 75 percent said it was “very important” to use social for event promotion. Facebook was the most popular channel at 78 percent, followed by Twitter at 56 percent, and LinkedIn at 49 percent. I’m still surprised in 2015 that some people find these results surprising.

One point, however, that was revealed by another survey from Econsultancy, IS surprising. According to respondents, “events and conferences are the No. 1 offline marketing tactic client-side marketers are planning to increase budget for this year—for the second year running. It’s also the offline marketing tactic respondents were least likely to say they were decreasing budgets for—again for the second year running.”

So while marketers continue to get great results from offline efforts, with only 58 percent of event marketers using social media to increase awareness of their events, methinks that if they were to start heavily marketing online using social, they would be reaping even more bang for their buck.

Wearable technology. It’s not just for health and wellness anymore. While fitness trackers represented the first wave of wearable tech, that landscape is rapidly changing. We’re seeing a decline in the sales of pure fitness-related wearables sales (ask Jawbone about that), as users become more accustomed to wearables and are demanding more functionality as a result. Some of the desired functionality includes the ability to take photos and video (which I’ll admit I don’t really get), accessing maps (which I totally get), searching online, shopping, messaging delivery, and convenient, built-in responses and voice recording capabilities.

Some 30 percent of U.S. smartphone users reported they intend to purchase wearables in the next 12 months, and out of that group, a whopping 82 percent are looking for their wearable to enhance their in-store shopping experiences.

Consumers have realized the power of wearables and how smart devices can add convenience to the things they do on a daily basis. They are looking to their wearables to deliver things like loyalty programs, alerts about long lines to purchase, special in-store events and sales – you know, things that both save money and make life easier. Add to that the ability to be reminded of a loved one’s birthday or anniversary and/or being able to make touchless or preclick payments and wearables are poised to be even more utilitarian than we might’ve originally imagined.

Brands need to be factoring this kind of appeal for consumers into their marketing strategies and into the digital experiences they are creating for their customers, as this interest on the part of consumers is going nowhere but up.

Last year, mobile finally passed desktop for local search query volume, according to data released by BIA/Kelsey, up 23 percent over 2014. This isn’t a shocker, what with the massive increase in mobile technology and adoption.

And marketers are taking notice, with U.S. local/location-targeted mobile ad spending rising to 56 percent this year to $6.7 billion—more than a third of all mobile ad dollars.

Local businesses, for heaven’s sake, get your websites optimized for mobile. 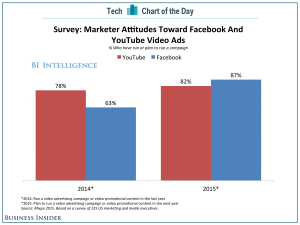 Move over, YouTube. Facebook continues to reign supreme with marketers, with Facebook videos grabbing 4 billion views every single day, a four-fold increase from just a year ago.

In a small survey of U.S. marketers, 87 percent said they plan to run a video ad campaign on Facebook, up 24 percent from last year, further proof, as if we needed any, that videos rise will continue.

Instagram Advertising is About to Get a Lot More Personal 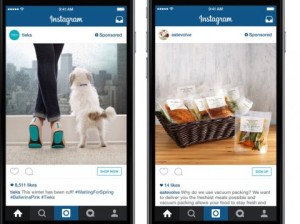 Speaking of Facebook, in a move to embark on the ability to do highly targeted advertising, Instagram is about to mine the incredible amount of data the social platform giant gathers from you. The photo sharing site currently runs ads based on age, gender, and country only.

In a move that has always been inevitable, Instagram’s play is designed to entice businesses of all sizes to start displaying ads. With 300 million users and the platform being a favorite among Millennials, this only makes sense. Instagram reports they are working to create an Instagram Ads API and that they’ll make this available to business via that and/or via Facebook buying interfaces. As always, at the moment, only large brands with direct relationships with Instagram are allowed to purchase ad space.

According to BusinessInsider.com, “Earlier this year, select brands were given the ability to show slideshows with multiple photos for ads along with clickable links. Now companies that buy ads will be able to direct users to check out their stuff with custom “Shop now” buttons, that when tapped, will open an in-app browser where they can shop without leaving the Instagram app.” As much as I don’t like this (as an Instagram devotee), as a marketer, it makes sense to make shopping while on the platform quick and easy. Not to mention profitable for brands. Facebook did the same thing with its advertisers and I’ve lost count of how many products I’ve discovered, and purchased, as a result. I imagine this move by Instagram will deliver similar results, although we’re clearly only at the beginning stages. 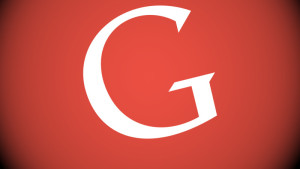 As mentioned in our intro above, hoping to transform photo-storage as it transformed email, Google has unveiled a new free and unlimited storage app for photos and videos called Google Photos,

Bradley Horowitz, Google’s Vice President of Streams, Photos, and Sharing, laid out the company’s plans for the new service to Steven Levy on Backchannel:

“We aspire to do for photo management what Gmail did for email management. Gmail wasn’t the first email service. But it offered a different paradigm of how one managed one’s inbox. We want to do that for photo management: To give you enough storage so you can relax and not worry about how much photo bandwidth you’re consuming, and enough organizing power so you don’t have to think about the tedium of managing your digital gallery. It will happen for you transparently, in the background. I don’t think there’s another company on earth that can make that claim.”

MarketingLand.com reports that “Google is also leveraging its machine learning tools to automatically categorize user photos making tagging or the creation of albums unnecessary. The automatic categorization helps with search, enabling a user to type the word “city” to see all of their city scenes even if the word “city” isn’t contained in their photo metadata.”