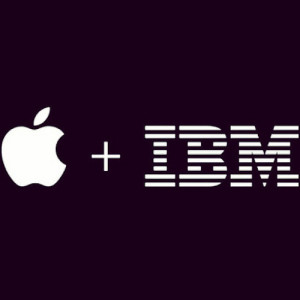 Big business news of the past week was the partnership announced by Apple and IBM. Anyone old enough to remember the iconic 1984 Macintosh Super Bowl ad depicting IBM as evil big brother? That’s kind of personified the relationship between the two companies since, well, forever, with Apple catering to individuals and to the small to mid-size business customer and IBM focusing on the enterprise.

Apple’s data released with this announcement indicated that 98% of Fortune 500 companies and 92% of Global 500 firms use iOS devices of some kind. I’d guess that many of those devices are the BYOD kind, not supported by the enterprise department, but used nonetheless by employees. Apple has historically not developed solutions and/or provided service of any nature geared toward the enterprise and IBM has not historically spent a lot of time catering to the small business market. Today, IBM has a huge focus on the small to midmarket business and developing solutions specific to their needs and Apple likely sees some advantages to partnering with large businesses in spite of their long history of not doing so.

An Apple – IBM collaboration could be awesome in many respects. One is the elimination of some headaches and security issues that non-supported devices bring to the IT team. Another is the ability for more efficient and effective creation and development of apps both for internal use across the enterprise, as well as for IBM to better serve the small to midsize customers who want and need apps created, but who don’t want to handle the development themselves.

As part of the agreement, Apple will sell iPhones and iPads through IBM’s massive enterprise supply chain, helping Apple gain a better foothold in the Fortune 500 – great for Apple, especially as Android grows in marketshare. Both companies will work together to develop new enterprise-centric apps and solutions leveraging IBM Cloud Services, great for IBM as it seeks to build its cloud business across the enterprise. Additionally, IBM will supply significant support for procurement and lifecycle management for iOS devices, including a new AppleCare for Enterprise program to provide 24/7 support for corporate IT departments and users. The support area has long been a place that Apple has failed the business customer, so this is a smart use of IBM’s tech talent and capabilities.

The way IBM and Apple are billing this is that it’s a move that will allow both companies to do what they do best. Apple will continue to build great hardware and develop the iOS platform while IBM handles enterprise sales and support and likely also uses this move to power their courting of the small to midsize market, which in reality covers some pretty large companies. Tim Cook summarized the deal as follows “[it] takes the best of Apple and the best of IBM and puts those together,” in an interview with CNBC. “There’s no overlap, there’s no competition, but they’re totally complementary.”

This is a move that could bring IBM closer to the many iOS developers and help them use their talents to fuel their cloud and mobile app development as well as the whole Watson ecosystem. iOS developers are well compensated by Apple and wooing them away would likely prove no easy task. This partnership between the two perhaps makes it easier for IBM to have access to the developer talent it needs. IBM brings to the table “big data analytics” for iOS users, although it remains to be seen specifically what that entails. But in what is clearly the “age of big data” if it makes how people are using iOS apps more effective as a result, that would be a good thing.

Time will tell if this truly turns out to be a tech marriage made in heaven. IBM has done plenty of other deals with tech hardware and software companies, some of which have worked and many of which haven’t. These are two companies, each with big egos and a long history of not working well together, so it will be interesting to watch as this transpires. It sounds as though it will be a smart move for each of them, as well as for their employees and their customers, but things don’t always work out the way glowing press releases write about them, now do they?

I know that my enterprise-employed husband would love an integration of iOS that’s supported by his IT team, mostly because it would make his life easier. It could also be a pretty cool opportunity for iOS developers to work and build within the Watson ecosystem, which to me sounds kind of cool. What do you think?