As marketers, we not only need to concentrate on the message we want to communicate on social media, we also need to look at who our target market is and where they are most active. If you are not doing that, you should be. Gone are the days when you could just share a few links and successfully connect with your audience. You also need to create conversation and engagement with your audience. Social media plays a huge part in determining where engagement happens and how buying decisions are influenced. 78 percent of Americans say social media impacts their purchasing decisions.

If you’re marketing to a younger audience, scratch Facebook, use Twitter. Research shows that teenagers are moving away from Facebook — and that started pretty much as soon as their parents started sending them friend requests. Teens might have a Facebook account and check in occasionally, but trust me, they’re doing their networking somewhere else – far away from the prying eyes of mom and grandma. You’re way more likely to reach the younger audience on Snapchat (ugh) WhatsApp, Instagram and Twitter as opposed to Facebook.

TechCrunch reported  that the possible reasons for teens losing interest is “the permanence of Facebook may be partly responsible for teens shying away. They feel that everything they post on Facebook is scrutinized, and they could jeopardize their future by sharing themselves being silly, partying, or by discussing their opinions. They worry parents, friends, and potential hirers might discriminate against them based on their digital past.”  TechCrunch also stated that “another possible cause for reduced usage amongst teens is that they see Facebook’s mobile app as bloated. There’s the News Feed, messaging, photos, events, groups, apps, and more. That means it can feel overwhelming, providing so many options that it causes decision paralysis. All that’s true and it’s also a lousy UX, so there’s that.

In Twitter’s early days, it was eschewed by teens and young people and considered mostly a platform for “older” people. Although “older” might well be defined as 35ish, but when you’re a kid, I’ll admit, that seems pretty ancient.  This appears to be no longer the case and Twitter has very much become a place where young people feel comfortable hanging out. Mostly because all the old folks have moved away from Twitter and are using Facebook to keep up with friends. Recent data from ComScore backs up this shift.

Twitter’s United States based web audience skews young, more than Facebook and other major social platforms. (Twitter is represented by the blue bars, while gray represents Facebook and black is LinkedIn. It’s also interesting the data shows some use of LinkedIn by teens, but that’s likely due to LinkedIn’s foray into college pages in the last year (find an article about that – it was kind of big news in the last year). A young audience was always a key element that LinkedIn was missing, so they’ve been pretty focused on ramping up use by their next generation users. 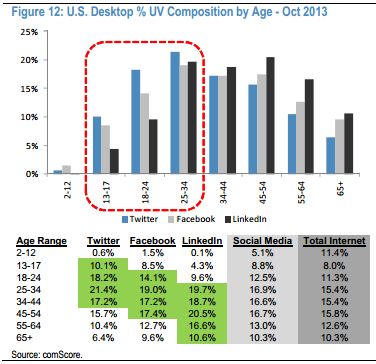 Data also shows the same for Global audience. Facebook and LinkedIn win in the 25 and older demographic, but Twitter is dominant in the 15 to 24 age group. 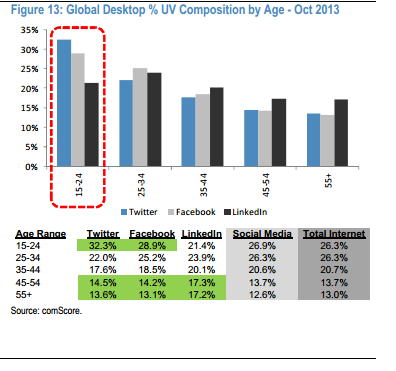 Check out the numbers when you combine Twitter and mobile. No real surprise there. 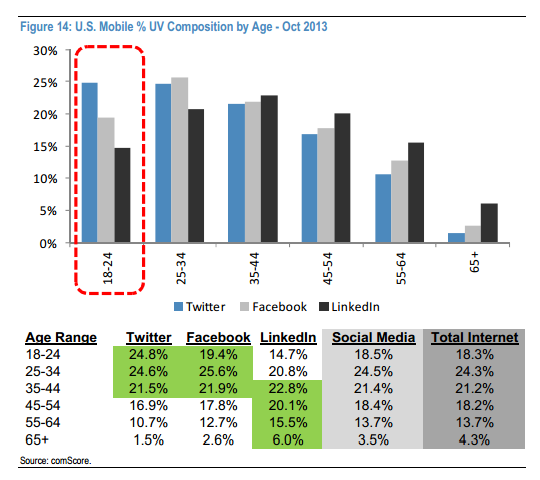 Social media platforms evolve quickly, as do their users. As marketers, it’s important to pay attention to changes in the data and social media demographics and adapt our thinking – and our strategies – accordingly. Twitter is currently enjoying a surge in popularity among the youth market, but I think this will change as Snapchat, Instagram and WhatsApp continue to gain traction. Parents are (or might be) on Twitter – but most parents haven’t yet figured out Snapchat and some of the other platforms that teens like. Which, of course, is why teens like them. It’s been awhile since I was a teen, but I distinctly remember not being interested in hanging out with my parents. Right??

Do you market to a younger demographic? Have you experienced the shift? Let’s hear it.