There have been a lot of changes happening lately regarding the way Facebook utilizes personal data from users. Aside from its dwindling brand page reach, Facebook recently announced that beginning in early April, we’ll no longer see Facebook sponsored stories in the news feed. Sponsored Stories, launched in 2011, involves customizing ads with user profile photos of people who liked that particular brand’s product or page as an implied endorsement of the ad.

As you might imagine and to no one’s surprise, privacy advocates jumped all over this. Not long afterwards, a class-action lawsuit was filed against Facebook accusing it of violating privacy rights of minors by publishing their likenesses and photos in ads without permission.  After a long legal battle, a US district judge approved a $20 Million settlement of the case. While $20 million may be chump change to Facebook, it’s like a reason the social network plans to phase out the controversial practice of sponsored stories ads in an effort to prevent additional lawsuits and damage to Facebook’s reputation.

What It Means For Advertisers

Starting April 9, 2014, marketers will no longer be able to create new sponsored stories. According to Facebook,  “Last year, we announced some changes to simplify Facebook ads, including eliminating different types of ads that had the same purpose and making our ads look more consistent. We also announced that marketers will no longer be able to purchase sponsored stories separately; instead, social context — stories about social actions your friends have taken, such as liking a page or checking in to a restaurant — is now eligible to appear next to all ads shown to friends on Facebook.”

Simply put, this means you’re still free to create ads for your products or services to appear in user news feeds and side bars which may include people’s likes and photos as long as it is not the main focus of your ad.

What It Means For The User

Facebook will continue to take advantage of the fact that recommendations from friends and family matter most to users. Facebook will also continue use your social actions (likes and comments) in the remaining ad units available to marketers. Know that you now have the option to opt out from being part of social ads that will be shown in your friends’ news feeds. If you want to opt out, change your settings – it’s fairly quick and easy. 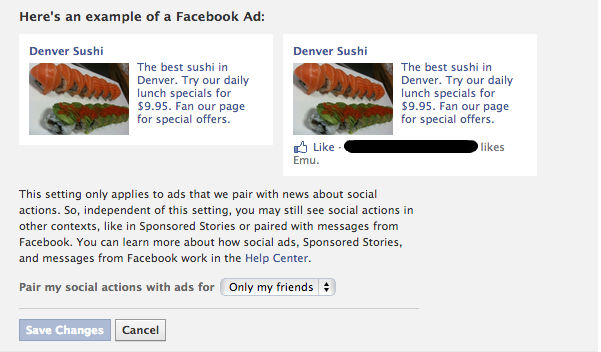 Killing sponsored stories may just be the result of Facebook simplifying their ad offerings as they mentioned last June, or eliminating a controversial advertising component tied to users’ personal data to prevent further legal trouble. Either way, one thing’s for sure, we’ll continue to see ads in our Facebook news feeds. Expect more changes to come as Facebook continues to find better ways to balance maximizing ad revenue, revenue that will also satisfy brands as well as it’s users.

What about you? Are you a fan of sponsored stories? Have they been effective in your campaigns? Will this Facebook move to kill the sponsored story ad unit affect your marketing campaign in a big way? We’d love to know your thoughts on this.