A nasty virtual fight erupted recently between Fitness SF, a gym in San Francisco and web designer Frank Jonen. And if you work as a contractor, there’s some valuable lessons to be learned amid the drama.

Here’s the back story. Fitness SF hired Frank Jonen to “develop a functional website for our brand.” Frank says he delivered the work, but Fitness SF didn’t pay. So, after repeated (and unsuccessful) attempts to collect on his invoices, Frank took the situation to a whole new level by replacing Fitness SF’s website with an angry letter.

Here’s an excerpt of the letter published on the site:

Fitness SF preferred to ignore our invoices instead of paying them. As a result this website is no longer operational.

We regret any inconvenience this may cause for you as a customer of Fitness SF, however it is a necessary measure in getting what is rightfully ours.

Half a year’s worth of work, including gallery featured logo renderings with over 1,300 views a piece.

While some of that got replaced in an attempt to cover up our work, other parts, like the base design (CSS) of the site were still used, illegally as they’ve not been paid for.

Normally there is no question of paying one’s dues. It is simply a matter of morals. Having morals and acting upon them or not having any and just betraying the people that got you started. Sadly we’ve come to know what Fitness SF stands for, or you wouldn’t be reading this.

Your word on their Facebook accounts will go a long way. We’re a small company in the heart of Europe, which is probably why Fitness SF believes they can sit this out till we perish. Can you support a company that acts like this? 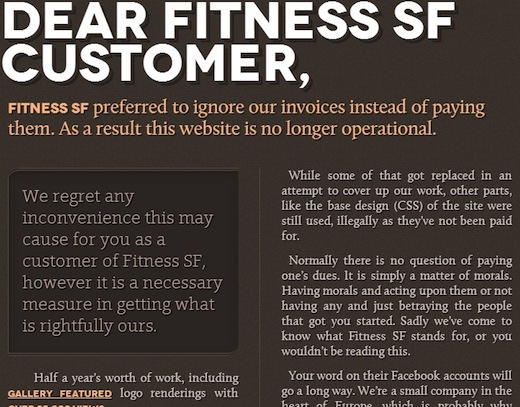 Fitness SF countered Frank’s claims with their own statement alleging that they paid Frank the sum of $5,000 the day he was engaged to do the work. SF claimed that Frank missed deadlines and delivered incomplete and unsatisfactory work, ultimately handling over an unfinished website to a new design firm at the client’s request.

We don’t know about you, but in this particular situation, neither of the two parties looks good. Some may applaud Frank for taking a stand against non-paying businesses—and for those of you who’ve ever been stiffed by a client, you may have dreamed about doing the same thing. But the truth is that we really won’t ever know the full story. I’m a big believer that your perception is your reality, and in this case each party has their own perceptions of what transpired, thus, their own realities. And the truth is probably somewhere in the middle, with neither party being blameless.

These situations are always ugly and never (hopefully) what any party wants to have to mess with. And the problem with going to an extreme measure like this example is that the designer may well have opened himself up to a lawsuit as a result of the coverage this squabble garnered. I’ve got to wonder if that’s ever worth it, especially if it makes existing or prospective clients worry about what action you might take against them should a dispute ever arise.

The important lesson? I’m a huge fan of the handshake and have great trust and confidence in the companies we take on as clients. Every now and then someone will surprise me, but in most cases, that trust is warranted. Nonetheless, whether you’re a contractor or an agency, good business practices dictate that you take steps to protect yourself before it’s too late.

It’s a critical component of business practices to have contractual agreements in place with all of your clients—and they should clearly articulate the terms of the project, deliverables, timelines, fees and payment schedules. And while you’re at it, take the time to create the process you’ll follow if you encounter a payment issue. And if you really want to do it right, hire an attorney to make sure you’ve covered all your bases.

What do you think about this craziness? Were you cheering on the web developer and thinking of the times you’d been stiffed or wondering why in the world anybody would ever be so brazen as to pull what he did? I’d love to know.