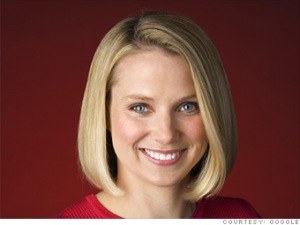 Recent news that Yahoo nabbed Google’s top female executive Marissa Mayer, making her one of the most prominent women in both corporate America and Silicon Valley, is, well, a big deal. Mayer’s status as employee #20, its first female engineer and someone whose Google career spanned 13 years, most recently leading up Google’s local and location services (including overseeing Google Maps, Google Earth and the 2011 acquisition of Zagat) all served to make Mayer a key player on the Google team.

Mayer’s addition to the CEO ranks of the Fortune 500 make her the 20th woman to hold that role, or 4% of the Fortune 500 leadership. Definitely not a time to break out in song, since “We’ve Come a Long Way, Baby” clearly isn’t applicable. But maybe we’re getting there? And maybe this is a good move on Yahoo’s part.

It’s reported that, when recruited by Yahoo, Mayer advised the board she was pregnant with her first child, an announcement that, apparently, didn’t stand in the way of her hiring. Mayer attributed that to “evolved thinking” on the part of the Yahoo board. Another broken pane in the glass ceiling? Or not? An interesting question posed not only on Twitter as the news broke, but also in Helaine Olen’s Forbes post entitled “Marissa Mayer and the Glass Cliff.” Says Olen:

The term ‘glass cliff’ was coined to describe such situations as Mayer’s Yahoo appointment. The theory comes from the work of British academics Michelle Ryan and Alex Haslam, who demonstrated several years ago that women are most likely to get appointed to top gigs when the chance of failure is highest. The two researchers contend that sexism causes those in power to appoint women to these risky positions because they don’t want to risk tainting a prominant (sic) man with the stink of failure. Examples of this phenomenon include Carly Fiorina’s tunure (sic) at Hewlett-Packard and, possibly, Meg Whitman’s more recent appointment at the very same company.

As an aside, has Forbes completely abandoned any sort of editorial oversight on the content it publishes? Two spelling errors in one paragraph (above) make me never want to read (or trust anything published in) the publication again. [end rant]

Does editorial sloppiness make you feel that way, too?

It’s no surprise that Yahoo has been struggling. Shareholders led by hedge fund manager Daniel Loeb, whose firm owns a 5.8% share of the company, ousted Yahoo CEO Scott Thompson for lying about his education. At that time, Loeb called the company one of the worst managed companies he’d ever seen, adding that it lacked vision, leadership and values. He also mentioned that Yahoo had missed every important social trend that had occurred and had much catching up to do.

A bit of a personal aside? Two years ago, Mayer was a speaker at SXSW. I’ve long been a fan and made it a point to attend that session. A woman in tech, who loves a lot of the same geeky stuff that I love, in a senior management position at Google—that’s my kind of session. I’m not being honest if I didn’t admit to being more than a little disappointed. As a frequent speaker myself, I know how important it is to captivate an audience (or at least try) with not only a great presentation, but a great presentation style, too. Both were lacking during Mayer’s preso at SX. Her slides were nothing to write home about (read: boring) and her presentation style left so much to be desired. It was kind of like getting the chance to meet your favorite movie star and finding out they were a dud IRL. I was so bummed.

This, by the way, totally differs from the experience Forbes’ contributor Carmine Gallo described when she heard Mayer speak, so I can only hope that I happened to experience Mayer on an off day. I’d love the chance to see her again and see that “exceptional storyteller” ability in action.

I digressed. I remain a Marissa Mayer fan and hope that if the Glass Cliff theory has any basis in fact, she does what so many of us do—pushes up her sleeves, kicks butt in her new role and proves the naysayers wrong. In spite of the goings-on in her personal life. Funny thing is, I can’t remember the last time a guy was hired in an executive capacity and questioned about his ability to perform because a baby was on the way.