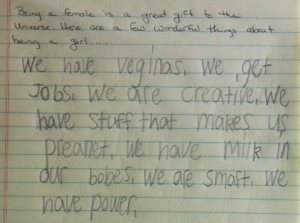 Welcome back for another week of the Best of the Web. This week a group of U.S. Marines stationed in Afganistan take “Call Me Maybe” to a whole new level, a 25-year-old drops a stink bomb on social media practitioners everywhere (and quite possibly her career prospects), cellphone providers rip us off (surprise), Foursquare changes, Facebook acquires—-oh my!

We think there are some great gems in this week’s crop! As a reminder we typically cover items in five categories: Integrated Marketing, Social, SEO, Mobile + Video, Awesomeness and Ridicularity. Let’s go.

We’ll start with the fun stuff. This video, yet another parody of Carly Rae Jepsen’s hit “Call Me Maybe,” done by a group of U.S. Marines stationed in Afganistan. Can’t love this enough. Published on YouTube two days ago with 149K views so far — we’ll bet this one goes far.

An 8-year old girl makes an awesome list of Why Women Are Great. It’s really pretty simple: “We have veginas. We get jobs. We are creative. We have stuff that makes us preanet. We have milk in our bobes. We are smart. We have power.” I freakin’ love this girl. On a serious note, as a mother of four daughters and someone who strives daily to teach girls to love themselves as they are, and is passionate about empowering girls in every way, shape or form, I love seeing young girls think like this. Girls really do rock. (Image credit: Jezebel)

It’s pretty interesting when a 25-year-old tells the world that every social media manager should be 25. Cathryn Sloane, a 2012 graduate from the University of Iowa, wrote and published a post in NextGen, Why Every Social Media Manager Should Be Under 25, opining that only the young are really capable of understanding and managing social media. And apparently, she and everyone at NextGen are amazed that the ridiculous nature of the post garners the attention of pretty much everyone in the social media space–you know, some of us who are professionals who actually, um, do this thing for a living. And who, typically, happen to be over the age of 25—at least in many instances. In fact, aren’t a lot of people who operate in the “manager” capacity for companies large or small typically folks who have a little experience under their belts – and not recent college grads? But what do I know–I’m not 25.

The post is really so self-absorbed and entitled that you’ll have to read it and evaluate it for yourself. And in all honesty, I feel a bit sorry for Cathryn. Hopefully, she’ll use this as a chance to learn some lessons. A good first step would be to be less narrow-minded and realize that a new degree and a Facebook account does not an expert make.

What was equally as fascinating to us is the follow-up piece written by NextGen, which came across as equally as entitled and self-absorbed. This isn’t—and shouldn’t be–about one generation competing against the rest of them. But it’s really a great example of the ignorance of youth and evidence of short-sighted thinking. It’s also a lesson in the dangers of combining short-sighted thinking, a lack of real world experience and what that might possibly do to your career prospects.

I think that people–young and not-so-young–should recognize and respect the talents, education, experience and expertise that each bring to the table. Whether it’s with regard to social media, technology, or anything else. And understand that by working together, we can make great things happen. And all learn from one another in the process. Let’s hope Cathryn (and her colleagues at NextGen) have learned some lessons as a result of this brouhaha. Mark Twain said it best: “When I was a boy of 14, my father was so ignorant I could hardly stand to have the old man around. But when I got to be 21, I was astonished at how much the old man had learned in seven years.” Thanks to Jerry Kampler, one of my Facebook friends, for reminding me of that.

Location-based marketing is not a standalone tactic. And, if used properly, could be an awesome (revenue producing) part of an integrated marketing strategy. Foursquare is one month into a radical redesign that paves the way for ad products with the release of Local Updates. These changes will refocus the check-in service around social interactions. Venues (read that: businesses) using the service will have a way to communicate with customers, which we think is pretty cool. Around here, we’re all Foursquare users, but time will tell if more broad consumer adoption will help make this (or any) check-in service robust and widely used. There is so much potential here—for both businesses who want to use the platform as part of their integrated marketing efforts to drive sales and for consumers to reap some pretty cool benefits. We’ll be watching this with interest.

The Olympics Jump on Social in a Big Way

With the Olympics due to start in just over a week, the International Olympics Committee has finally taken the wraps off a new Olympics Hub as part of its main website promoting the event. The Hub integrates Instagram, Facebook, Google+, Foursquare, Tumblr and Twitter. We think it’s going to be awesome–what about you?

Shell Oil’s social media nightmare continues, thanks to a bunch of pranksters behind @ShellisPrepared. Greenpeace has apparently discovered that it’s far more effective to ram Shell online than it is to send Greenpeace boats out to protest or to handcuff themselves to drilling equipment in the snow. Combining a fake corporate site with a fake corporate reaction seems to legitimize the content, and convince or at least confuse most people on Twitter who have limited attention spans. Shell’s attempts to contain this train wreck have been lackluster at best, in part because they likely fear bringing any more attention to the critical content. This is just fascinating from both a user ‘watching’ side and an agency ‘what would you do’ side. Just thinking about having Shell as a client and trying to contain this makes me – well, happy I’m not.

There’s nothing we love reading about more than great website design strategies and how important search engine optimization is as a part of that process. If that kind of content trips your trigger, you’ll love this post from SearchEngineLand on The Pillars of Strategic SEO and a Primer on Website Design. In fact, even if you don’t love thinking about this kind of stuff, you should read it anyway. Trust us on this one.

Video is the New Black

It’s true. Video is—or should be—a huge area of focus for you and your integrated marketing efforts. This report recently released by Digital Marketer guides businesses through the video creation process and can help marketers and brands optimize their videos for higher search rankings. We’re reading it. You should be, too.

Are you (like us) paying an arm and a leg for shared data plans? This awesome post from the New York Times, Shared Mobile Data Plans: Who Benefits is, well, a must-read. Essentially, the plans offer the most value for the folks who already spend a to, to squeeze as much out of their wireless service as possible. They are not, however, useful for frugal customers. Families, READ this.

When it comes to mobile device usage, people apparently prefer texting over talking. And who on the planet is surprised by this? Certainly no one here. Ofcom’s Communications Market Report notes an unprecedented drop in mobile voice calls, joining fixed-line voice calls in a downward spiral. SMS usage, on the other hand, as well as communicating via social networks are, for many, the preferred communication channels. Think about how you might use this kind of information n your marketing efforts. And how do you rate when it comes to this? Are you a texter or a talker?

Facebook recently acquired Spool, a San Francisco startup. Wonder why? Let’s see … Spool makes free Google Android and Apple iOS apps for smartphones and tablets that let users save Internet articles and video that can be viewed online or off. Think DVR for the web. The acquisition is purely for the talent behind these apps and if you were a fan of the Spool apps, sorry to say the apps will be shut down. Keep your eye on Facebook as it continues its march toward an improved mobile focus.

There you have it. Our wrap for the week. And what you don’t find here that makes you laugh or learn, head over to Gini Dietrich’s Gin and Topics – there are some great laughs there. Actually, Robert Downey, Jr. is there and that’s all I really care about. Ever. #rdjforever