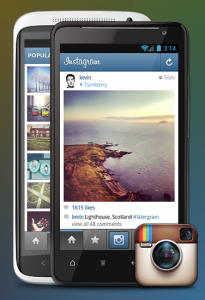 If you heard a collective cheer around the Internet yesterday, it’s likely because Instagram is now available for Android devices in Google Play.

The monstrously popular photography app, which has been available since 2010 on iOS devices, has been anxiously awaited by Android users. CNET reports that more than 430,000 Android users are on the app’s waiting list, all of whom will join Instagram’s community of 30 million registered users.

Instagram has been a popular choice for photography-loving iPhone users, thanks in part to a number of filters that add artful visual effects to photos with the tap of a finger. Plus, Instagram supports sharing to a number of social platforms, including Facebook, Twitter, Flickr, Tumblr and Foursquare.

Instagram users take more than 5 million photos a day, reports CNET. Collectively, more than 1 billion photos have been uploaded to Instagram, making it one of the faster growing photo apps.

“…the startup has a real chance of hitting 100 million users across both devices soon enough to matter,” writes Alexia Tsotsis for TechCrunch. “Facebook took about four years to reach its first 100 million; the idea of Instagram becoming the world’s first formidable, mobile-only social network is extremely compelling.”

The Android version of Instagram can run on any camera phone with Android 2.2 or above. The app is not currently available for Android tablets. The features and filters are the same as the iOS version, with the exception of Tilt/Shift, Flickr integration and inline posting.

It seems that Android users have wasted no time in installing Instagram. According to a check of Google Play yesterday evening, the app has already been rated by 32,580 users.

Are you an Android user who has anxiously been awaiting the arrival of Instagram? If so, what do you think of the app so far?