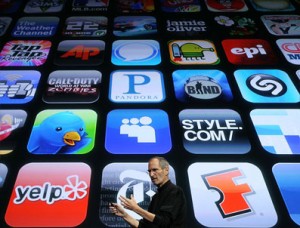 This is a guest post on mobile advertising and monetizing apps written by my friend, Hillel Fuld. A self-described tech and social media addict (like so many of us), he’s awesome. And someone who is always on the cutting edge of all that’s happening in the world of tech – ergo, I stalk him often. You should, too … and you can find him on Twitter @hilzfuld.

I was especially interested in him authoring this guest for several reasons. First, with 100% growth in mobile advertising in 2011 alone and that trend predicted to continue upward, brands and marketers need to be planning their mobile advertising strategies now. And secondly, we work with developers daily developing custom apps for clients, and are always posing the question of how best to monetize an app. So we figure if these are questions we have, they are questions you, and our many developer friends have, too. Read on ….

As Shelly mentioned, I like tech. And social media. A lot. And one of the results of this combination is that I get asked a lot of questions about technology on the various social networks on which I am active. A question I have been asked hundreds of times by now is whether or not to jailbreak iOS devices.

Jailbreaking an iPhone For Free Apps?

Jailbreaking an iPhone used to have major advantages such as multitasking, which was sorely lacking on the iPhone. However, iOS 4 has multitasking, so why are people still jailbreaking? The main reason is to have access to apps for free. Yes, the ones we pay for – those very same apps are available to the jailbreaking community for free.

But here’s the thing. When people download these apps for free, they are essentially stealing from the developer who spent countless hours and days, sometimes even months or years creating an application for us to enjoy. And I don’t know about you, but I feel pretty strongly that these developers deserve to be paid for their efforts.

So, whenever someone asks me whether to jailbreak so they can download apps for free, my answer is always “Is $.99 really going to kill you? Why not let the developer make money and get paid for their hard work?”

It is for this reason that when I was approached (hate the word recruited) by a company named inneractive whose focus is helping mobile developers on all platforms increase their app revenue, it was a no brainer and I took the job.

I have been working at inneractive for 6 months now it’s really cool to see the amount of money our developers are making on a monthly basis from their apps.

But wait, it gets a whole lot more interesting. These developers who are making up to $50,000 a month, are giving away their apps for free. Yes, I am talking here about free apps, not the ones you pay for. Which I know sounds crazy — except that it’s not. That means that even if you are the type of person to jailbreak and not pay for apps, you still have access to all these premium mobile apps without spending a dime.

So how are free apps generating so much revenue? The answer is that with mobile advertising, free apps are actually the only product I can think of that when given away for free, can make more money then when sold for money. Gartner recently reported that mobile advertising revenue is predicted to reach $3.3 billion in 2011 – up from $1.6 billion in 2010. More on that later.

Mobile advertising is a booming industry, which is expected to reach numbers as high as $56 billion by 2015. At inneractive, our focus is on taking a unique angle to the whole in-app advertising model and working closely with the developer to increase revenue. Here’s how it works.

A mobile developer looking to monetize has a few options. I am going to address two of them, pay per download and in-app advertising. Pay per download, as a model is on its way down. Over 81% of all app downloads in 2011 are going to be free apps. Forget the stats for a second and think about your usage patterns. When you first see an app you like, how much more likely are you to download the app if it’s free? It has to be really good for someone to pay for it, even if it is only $.99. When you charge for an app, you are essentially putting up an unnecessary barrier between the user and the download. Not a smart move.

It is for this reason that free apps reach mass market much faster and have more potential for revenue.

OK, so let’s consider in-app advertising. Which is a fancy way of saying “mobile ads.” A mobile developer looking to include ads in his or her app has many options, most in the form of ad networks (iAD, AdMob, etc.), as well as local ad agencies. inneractive helps you choose what form of mobile ads might work best for you and your app by integrating over 80 global ad networks and local agencies into one cross-platform SDK and offering a mediation platform that optimizes all these ads for your and your app in real time.

What does this mean for you? It means you have a global fill rate of over 95%. A Fill Rate is the percentage of times a user opens your app and sees an ad. You want that number to be as high as possible so as to increase advertising revenue. Some ad networks have an average Fill Rate of 20%, others 50%, inneractive has over 95%. Almost no money left on the table.

Moving along, another advantage that working with the inneractive team is that over 80 integrated ad networks and local agencies provide a higher CTR (click through rate). Again, think of yourself. If you see an ad in your language and on a topic relevant to you and your current location, the chances you are going to click increase significantly. inneractive’s ads are displayed in over 200 countries and its partnerships with local agencies around the world ensure that the ads are relevant and targeted. More clicks, more revenue for the developer.

One more thing. When it comes to in-app advertising, the metric by which developers are paid is eCPM (Effective Cost per Mille). What eCPM means in English is the amount of money you are paid per every 1000 impressions. Most ad networks speak of an average of under $1. inneractive’s average eCPM across all platforms is well over $3.

Want to Increase Mobile Ad Revenues? What to Look For in a Partner

The bottom line is this — whether or not you choose to work with inneractive, some of the characteristics you should look out for when choosing a company to increase mobile ad revenues are Global Fill Rate, CTR, eCPM, and of course customer service.

Let me just conclude with one more interesting fact about inneractive. All the numbers and stats are nice, but what about the actual integration? How do I get ads to appear in my mobile app?

The team at inneractive came to the conclusion long ago that a developer’s time (not to mention talent) is better spent creating the next big app than on long and tedious SDK integrations, It is for this reason that we have worked for the past few months on cross-platform SDKs that take ten seconds to integrate. Not an exaggeration. Ten seconds and you are up and running. Watch the integration video here.