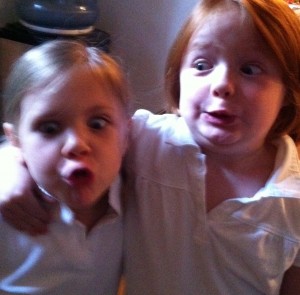 Sometimes in this blog we talk about marketing, strategy, social media and other really important stuff. And sometimes we just talk about stuff. It’s our way of letting you into our zany lives and showing you that we’re human. And quirky. Just like you. So, wanna know what it’s like having twins?

In a word – amazing. But the most ridiculous things happen to you when you’re the parent of multiples. And you quickly realize (if you didn’t have a sneaking suspicion already) that people can be really stupid. And those dummies – well, they are everywhere.

And no question is off limits. People want to know if your kids are identical yet they seem to freaking have no idea what the word “identical” means. C’mon folks – identical – that means they look exactly alike, no? Or at least somewhat alike. And if you look at twins and they don’t look alike well, hell, that means they are NOT identical. Dude.

It’s also not uncommon for people to feel as if they should know exactly what transpired that made you have twins. Do twins run in your family? Which side? Where did the red hair come from? Did you have (gasp) infertility issues? Did you buy them on a street corner or were they an unexpected freak of nature?

This video that my friend (and fellow mother of multiples), Erin Margolin, found and shared had us both rolling. Without further ado, if you want to know what it’s like to be a parent of multiples, watch and enjoy. And if you’ve ever asked some of these ridiculous questions, please stop it. Now.

And if you’re a parent and living a crazy life (like me), and if you’ve realized that laughter is the best remedy for chaos, head over and check out Mompetition’s YouTube Channel. She’s hysterical, her blog rocks and she will now be a daily dose of laughter for me. And you don’t have to be a parent of multiples to enjoy her.

If you’re hooked on Mompetition and have extra time to kill, watch this video. But I’ll warn you, if you’re one of these parents, we can be friends, but it would be best if we don’t hang out together. Because I may be a nut job but you need to chill. And I can guarantee that I would drive you crazy!