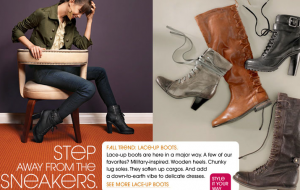 I was reading today’s AdAge about The Gap’s sister brand, Piperlime, and their experiment with adding some edgy personality to their Facebook wall posts. The postings were in conjunction with a well-planned marketing campaign, and it ruffled the feathers of some consumers.

First of all, let’s just get on over the idea that it’s important to please everyone, every time. That’s just not possible. And I think that’s important for everyone, marketer or consumer, to regularly remind ourselves.

More importantly, Piperlime decided to step out from behind the shadow of The Gap and try to find the distinctive voice of their brand. In order to do that, you sometimes have to go out on a limb, and maybe even experiment a bit. They identified their target audience – an older Gen Y female, aged 20-30, identified what they perceived to be some shared behaviors and feelings, and worked with Butler, Shine, Stern & Partners to create the “Let’s Get Dressed” campaign targeting that demographic. Big surprise that not every consumer liked the campaign. What matters, though, is that apparently some did.

As a direct result of this campaign, the Piperlime “likes” on Facebook increased a whopping 934% during a two-week period, and the page’s comments increased 479%. Not every comment was favorable, but guess what – it doesn’t matter.

The other thing we need to get over – as people and as marketers: the ridiculous idea that everyone should agree with us. How boring would that be? Personally, I post often (and well) on my personal Facebook page. Not everyone agrees with what I say or think and, as a result, we have interesting discussions, different points of view are shared and guess what – it’s fabulous! And interesting. Sometimes more than one friend has a differing opinion and I love the fact that they share their thoughts and feelings, especially those about which they are most passionate, with me and with the community of friends who pop in and out.

I say “Bravo” Piperlime. You don’t know until you try, and engagement is what matters. And even if it’s engagement from consumers who don’t like or agree with your message, the opportunity to directly interact with them and dig deeper into their feelings on an issue – and maybe even use the insights gleaned to tweak a campaign if needed is, for a marketer and a brand, pretty valuable.