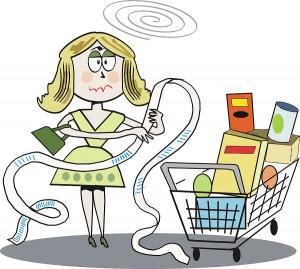 This is what my friend Erika Napoletano, the infamous Chief Redhead at Redhead Writing, would call a Bitch Slap. Damn, but I wish I’d thought of that.

I’ll ask again … do you have a job? If so, it’s probably because the business you work for has customers. And when was the last time you gave a damn about those customers? Those pesky people who bug you incessantly with their neediness. Those annoying gnats that allow you to keep that job. The J.O.B. The thing that provides a living. That feeds your kids. That pays your rent.

Pull your heads out people!

Let me give you an example. Yesterday, I was at the neighborhood grocery store. I needed deli meat and I prefer the brand that this store carries. It’s also about five blocks from my house, so I shop there often. I got to the counter and there were 6 deli workers, all engaged in the business of doing something other than being even remotely interested in waiting on me. The only customer. I’m polite. So I waited. And waited. Then I waited some more. Then I realized they were playing the “I’m going to ignore her and let someone else wait on her – I’ve got stuff to do here” game. I’d recognize that game anywhere – it happens all too often.

So, panties most definitely in a wad and in a quiet rage, I huffed off to the front of the store and the customer service center. As if I have time for this crap. The young girl manning the counter asked if she could help. I replied that I wanted to speak with a manager. She said “sure thing” and poked her head into the office and spoke to ‘the guy’ and said “There’s a customer out here who wants to speak with you.” I suppose he grunted in response, but I’m not really sure.

And I waited. And waited. Then I waited some more. Have I mentioned that I’m not particularly good at waiting? The young lady realized that steam was about to come out of my ears, but she figured that cowering in a corner was safer than bothering her boss again and reminding him that I was waiting to be serviced. Oh, that sounds kind of nasty, doesn’t it. Not that kind of serviced.

Finally, I gave up. I have a business to run. Clients to keep happy, kids to feed, deli meat to buy. I went to the checkout counter to begin the process of paying for the groceries in my cart. When my friends, the checkers and baggers, asked about my shopping experience (as they are no doubt trained to do), I said that it was crap. That I’d gotten absolutely no service at the deli counter and when I went to the office to talk to the manager about it, I’d gotten no service there either. They shook their heads and said “That’s too bad. You’re in here a lot. You send a lot of money here.” No duh. And, for the record, not one of them beat feet over to the customer service office and dragged a manager out to rectify the problem. Another fail.

Speaking of money, let’s do some quick math. Some of you are smiling, I know. You know how I feel about math. But this is important. I cook. A lot. And feed a family of four. I spend, on average, $200 a week at this store. That equates to about $860 per month that I spend on groceries and other necessities. Round that off and say that my annual value to that particular store is about $10,000. Do you think that when those idiots at the deli case are ignoring me that they see a big, flashing sign with $10,000 on it – or do they just see some bothersome gal in sweats busting up their party and having the audacity to expect them to slice up a little turkey?

And that manager. What a moron. He doesn’t deserve his job, that’s for sure. Funny thing, I doubt he even knows it.

So, here’s the thing. I quit you, Cosentino’s Brookside Market. And now, I schlep an extra three miles over to the Hen House in Prairie Village and give them my $10,000. There, they welcome my business. They greet me enthusiastically, with a smile, and can’t wait to slice some turkey for me. And anything else I need they serve up graciously. That’s how you treat a customer, folks. As an aside, I’m not the only customer who feels that way about the Hen House – check out this Yelp review and you’ll see what I mean. I wonder if the folks at Cosentino’s have ever heard of Yelp. Hmmmm.

Don’t make the mistake of taking your customers for granted. Greet them every chance you get with a smile and an appreciation for the fact that they choose to spend their hard earned money with you – instead of with someone else. Small businesses who are looking for a way to differentiate themselves from the competition would be well-served to remember these simple words of advice. Treat your customers like royalty – they will reward you by coming back.