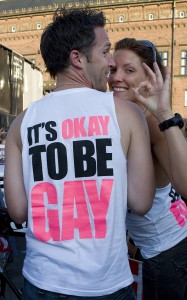 As I trolled through this morning’s news, I stumbled upon a Chicago Tribune interview of Don Thompson, the guy who took over as McDonald’s No. 2 and COO this past January.

McDonald’s has chugged right along during the course of the last few years, in spite of the economy that managed to take so many other businesses – restaurants among them – out at the knees. In spite of that success, there are many hurdles ahead, one of which is trying to convince a nation captivated by Food, Inc. and Jamie Oliver’s Food Revolution that eating at McDonald’s isn’t akin to letting your kids smoke cigarettes. A harsh comparison, I know, but in addition to being a straight, gay-loving human being, I’m also a mom. And these days, my focus is on putting good stuff in my kids’ bodies and keeping them fit and healthy. That does not include more than an occasional meal at McDonald’s or any other fast food joint. But hey, they’ve gotta keep those doors open — I get it!

I digress. McDonald’s has another hurdle – and it’s figuring out how comfortable they are with a diverse customer base. The thing about the Tribune interview that got my attention was the question about the TV spot that is currently airing in France, featuring a gay teen and his father.

This little video has only had 1.8 million views on YouTube in the two weeks since it aired — oh, brands do so love it when there’s a controversy. And, always reliable when it comes to classy responses, Bill O’Reilly, Fox’s crackerjack news anchor, mocked the ad on air by quipping “ Do you think they have an ad for Al Quaeda?” likening the McDonald’s ad to something a terrorist group might produce. Brilliant, Bill. Just brilliant. Naturally, gay activists’ chic boxer briefs are in a wad and they’ve demanded a public apology from O’Reilly. As if that will actually mean something.

Back to McDonald’s and their #2. Thompson claims McDonald’s strategy is to “be there for our customers … and that’s what our focus is: Great product, great food, great experience, great service….” And, apparently, in Thompson’s world, McDonald’s can be there for their gay customers in France, but everywhere else, their strategy is to keep that on the down low.

Following the O’Reilly outburst, a McDonald’s spokesperson said “the purpose of the campaign was to show society the way it is today without judging” and “there’s obviously no problem with homosexuality in France today.”

The New York Daily News‘ take on the situation was that McDonald’s “wants to be seen as a company that welcomes everyone. Judging by a new advertisement running on French television, that includes gays.”

Such an epiphany! McDonald’s – something for everyone. And who knew that France was the only country in the modern world that could be considered diverse and, more importantly, nonjudgmental when it comes to those pesky homosexuals? And appalling, as reported ad nauseum by both bloggers and news sources the world over, that McDonald’s would have the cojones to “target” these very people. These Gays. Oh my!! Seriously. People. McDonald’s isn’t trying to target gays – they’re too afraid of that — at least in the U.S. But they are dipping their toes in the water (and trying to make a buck) — and starting with France. Where people are, apparently, gay. And it’s okay.

Thompson addressed this topic in the Tribune interview in a manner not at all uncommon in the world of corporate doublespeak — roudaboutly. Yes, I made that up. He said, “cultures are very different around the world. (For instance), I’ve never shied away from the fact that I’m a Christian. I have my own personal beliefs and I don’t impose those on anybody else.” He went on to say “ … it’s not that I’m to be the judge or the jury relative to right or wrong. Having said that, at McDonald’s, there are core values we stand for and the world is getting much closer. So we have a lot of conversations. We’re going to make some mistakes at times. (We talk) about things that may have an implication in one part of the world and may be the cultural norm in another part of the world. And those are things that, yes, we’re going to learn from. But, you’re right, that commercial won’t show in the United States.”

He said it. That commercial won’t show in the United States. I’m so very proud to be an American at moments like this. Arrgh.

My take. Americans, pull your heads out of your collective rear ends. Gay people exist. Just like the rest of us. They even eat hamburgers. And that advice goes for you, too, McDonald’s. Don’t hide behind the curtain of the religious beliefs of your leaders and/or purported beliefs and mores – if you truly believe the stuff you spin, your customers (and your marketing efforts) should include people from all walks of life. That includes people with different skin color AND different religious beliefs AND different sexual orientations. And the fact that we’re even still discussing this in society today makes me have a little mouth vomit just thinking of it. And, for the record, David Ibsen at The Daily Casserole said it nicely, too. I’m going to be sure and read his stuff more often. You should, too.

Yeah, that’s right, I’m taking a stand. Gay people are awesome. The fact that they are gay is irrelevant. And the fact that McDonald’s or any other major corporation is afraid to put a gay “character” in one of its hundreds of thousands of TV spots because of the potential fallout in our apparently backasswards country is appalling.

This gay lover – wait – scratch that. This people lover has spoken. Bring it.