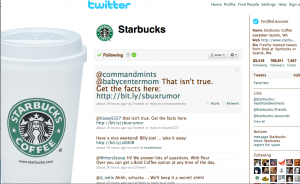 I was having yet another conversation with a friend today who was questioning the efficacy of social media as anything other than an advertising platform. Having realized it was “free marketing” he has, naturally, already jumped all over it (his words, not mine) by creating the ubiquitous fan page on Facebook and using it to broadcast his message to the masses. But his point was that he didn’t see social media as anything BUT an advertising channel and he was lamenting about the “narcissistic bullshit” that he had to wade through in that milieu and how pointless it all seemed.

When I asked for a definition of “narcissistic bullshit,” he promptly replied that he was bored to tears reading through posts that mentioned “little Johnny was standing in line with me at Starbucks picking his nose.” However, when pressed, he admitted that he did care about maybe being able to sell his products to the mom who was so narcissistically sharing the fact that Johnny had a little nose-picking problem. And making a joke of it via some social media channel. Funny that it didn’t occur to him that the broadcasting of his message, his “sales pitch,” might be equally as annoying to people.

On the heels of that conversation, I read this week’s Ad Age, which featured an article about Starbucks and how they’ve managed to get their business brewing again via social media and integration of social media into their marketing efforts. Their success can be largely attributable to the fact that they were smart enough to realize that the opportunity presented by social media was the chance to build customer relationships, engage and interact with customers and make them a part of the brand itself. Ding, Ding, Ding.

Now back to my friend’s comments. The thing he is missing is this: while she was in line at Starbucks, making that comment on Twitter or Facebook, and maybe even also using Foursquare to check in, in the process that mom might’ve also forged a connection – virtual or not – with other moms. Moms who are or have been dealing with the same toddler-based craziness and who then see the brand – in this case, Starbucks – as an oasis from which to momentarily step off the merry-go-round, if just for a few moments, and enjoy a lovely Skinny Triple Shot Latte with Non-fat Vanilla. Let’s just call that a little bit of “brand image gold” for Starbucks.

My point is this – people (like my friend) need to get over themselves. Brands need to get over themselves. And they need to quit trying to shove marketing messages down consumers’ throats via Facebook, Twitter, etc., just because they think “it’s free.” It’s not about free – it’s about the conversation. And by the way, that’s largely what’s made Starbucks so successful – the genuine effort that they invested in engaging and interacting with the customers. It’s not really that hard. To quote my friend Molly Cantrell-Kraig in a recent blog post she guest wrote for us, “Perfection is not expected. Participation is.”

And social media is NOT, I repeat NOT free. It takes a passion for it, a strategy and a commitment to participate. Starbucks’ Twitter success came about because a former barista named Brad Nelson believed in social media. He approached the powers that be in the content and online departments and presented them with the idea of opening a Twitter account in 2008. And I’m sure that to describe their reaction as “skeptical” is an understatement. But Nelson did his homework, he was passionate and he pitched it by saying “It’s a lot like being a barista on the Internet.” Now that was something they could relate to. Despite their misgivings, they let him loose and today the brand has some 775,000 Twitter followers. Just knowing the story actually makes me want to follow them – and get to know Brad a little better, don’t you?

But, more importantly, Starbucks uses social media as a part of an integrated marketing strategy. It’s a tool, a channel, a place to reach out to customers, listen to them and engage with them, but it is, most definitely, NOT free. It requires strategy, experience, a huge investment of time and energy and it requires regular and consistent participation. If anyone tries to tell you anything to the contrary, they are probably one of the new breed of social media charlatans, trying to make a quick buck and an even quicker getaway once they’ve managed to get your money.