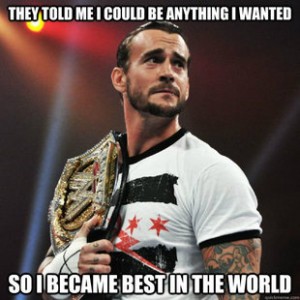 When it comes to successful social media strategy and adoption, large corporations tend to be classified as late adopters—that is, if they’re even paying attention to social channels at all. Yet the WWE has emerged as a social media monolith, a company that, through experimentation, an army of resources and a mind-boggling financial investment, has managed to build a social media presence that extends the brand far beyond the squared circle and on to millions of screens around the world.

Confession? I’m a huge (HUGE) wrestling fan, something Shelly still has a hard time believing. And even though I have no problem vocally professing my love for my favorite superstars (*cough* Undertaker *cough*) and my husband paints wrestlers for a living, this isn’t a fan girl post. I’ve been fascinated with the WWE’s social media strategy and investment for over a year—and when it comes to digital success, companies large and small can learn from the WWE’s approach.

WWE’s Social Media By The Numbers

Before we dive deeper, here’s a quick look at the company’s current social stats:

Sure, those numbers are impressive (and even more so when you consider that they don’t include superstars’ Twitter followers, for example)—especially the number of YouTube video views. But as any digital marketer knows, likes and subscribers and followers aren’t everything. After all, if you have a huge audience but little to no engagement, that’s not exactly something to brag about.

Of course, when it comes to engagement, the WWE has a slight advantage. After all, wrestling sports entertainment fans are a pretty rabid bunch. And whether they’re commenting on Facebook, +1’ing on Google+ or tweeting during a weekly show or pay-per-view, the WWE universe, as they’re known by the company and its superstars, isn’t shy about joining in the conversation.

One of the things that impresses me most about the WWE’s strategy is the sheer level of participation. Larger corporations are particularly vulnerable to seeing their social media strategies fall victim to the divisive nature and silos that are typical of companies this size. The WWE, however, has managed to achieve widespread buy-in. They’re so serious about their ongoing social media strategy, in fact, that they elected Patricia Gottesman, president and CEO of social media monitoring and analytics company Crimson Hexagon, to their board of directors.

And although the company’s social media team is undoubtedly the brains behind the operation, the strategy wouldn’t be as effective without participation from the company’s superstars. Right now, 81 superstars are on Twitter—essentially anyone who’s on TV tweets. Some are, of course, slower to catch on than others. Triple H just published his first tweet on February 25—and five minutes later, he already exceeded 133,000 followers. 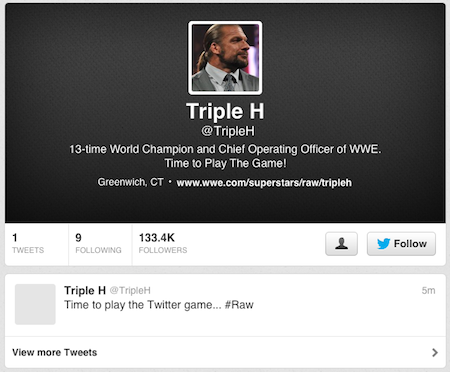 You’d automatically assume that the goals of the WWE’s social media strategy include increased fan engagement, increased merchandise sales and rating boosts, to name a few. Yet online participation benefits the superstars, too—and in the case of Zack Ryder, it might just be what saved his job.

After his on-screen character and presence started to flail, Zack took to YouTube to create a new persona, a Jersey Shore-style character nicknamed Long Island Iced-Z. The show soon took off with fans and propelled Zack into the spotlight on WWE.

Mobile is undeniably huge for any industry—and the WWE hasn’t hesitated in tapping into the mobile market. A new iOS and Android app is the next evolution in a multiscreen viewing experience that now includes show-specific hashtags and the announcement of Twitter trending topics during shows.

Later tonight, the company is poised to take their social media strategy one step further during Social Media Smackdown. Billed by the company as “the most socially interactive SmackDown in WWE history,” the show will include live tweets, current trending topics, interactive polls and fan Touts.

What’s especially interesting about this particular event is that SmackDown is pre-recorded earlier in the week. Announcers Jerry “The King” Lawler, Michael Cole and Josh Matthews will provide live commentary, enabling the incorporation of up-to-date social media content and participation.

How To Launch Your Own Smackdown

The WWE is, undoubtedly, an impressive social media marketing case study. They also have a huge team of resources and what’s likely an incredibly large budget to make this happen. The vast majority of brands and businesses are probably not in the same boat. Even so, I think there are a few things you can take away from the WWE’s approach:

*Break down the walls. Or, as Chris Jericho would say, “Break the walls DOOOOWN.” Social media shouldn’t be owned by one small part of your company. It should be a team effort that unites everyone from sales and marketing to IT and the C-suite. Your digital strategy should, after all, tell your company’s story—and aren’t your employees the key characters?

*Experiment as often as possible. Anyone who’s created or implemented a social media marketing strategy knows that things change on a nearly constant basis. New tools and platforms emerge almost daily and ever-changing audience demands require fresh tactics to maintain long-term engagement. Sure, you’ve likely found platforms and content types that work for your particular demographic. Yet at the same time, don’t be afraid to go out on a limb (assuming it makes some sort of sense for your brand or business) and try something new. Not everything the WWE’s attempted has been wildly successful, but the fact that they’re willing to push the envelope and mix things up speaks to their digital commitment.

*Learn to let go. Social media marketing can be difficult, especially for control freaks. You can’t control what your audience says or posts, and that’s something that prevents a lot of brands and businesses from getting online in the first place. Here’s a tip: learn to let go! You better believe that a lot of the WWE’s online engagement comes from fans who are pissed off about a character, a storyline or a piece of company news. Heck, even some of the superstars have been known to air their grievances with the company online (some of which, of course, are part of a story, rather than rooted in fact). You can create a social media policy and a crisis plan and train your social media team—yet you can only do so much. And part of the fun of being online is the spontaneous reaction you generate from a particularly compelling piece of content, or a must-see video, or a “you’ve gotta read this” blog post.

And one other thing? Don’t forget to have a little fun, too. If you need help, just channel your inner Funkasaurus.

What’s your take on the WWE’s social media strategy? And don’t be afraid to share your favorite wrestler (past or present), too.