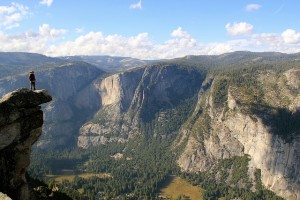 I have absolutely no idea what I am doing here—and by here, I mean the V3 blog. Yet that’s exactly WHY I’m here. Because everyone—each and every one of us—has a place, not to mention a few challenges to accomplish. And one of mine is writing a guest blog.

I’m just some guy. I’m no marketing genius, I don’t own my own business, I haven’t written a book, or created a marketing plan for a business that you’ve heard of, and I don’t have legions of fanatic Twitter followers.

Despite all that I don’t have, what I do have is a network of people who believe in me. People who push me to do what I think I can’t do. Because of the ease of communication these days, especially with social media, I have come to know many people whom I would ordinarily never have the chance to know. People like the V3 crew, for instance. Heck, Shelly gave me my first important message in social media: Your Twitter handle matters.

Too many people to mention directly have said that you can pick your friends (and often the quote ends with a dirty joke, but not this time). On the flip side, what do you do when you are picked and you’re not sure why? Go with it. What you put out into the world and what someone else sees aren’t necessarily the same thing. What you think and what others think rarely matches up. And sometimes, a good friend may see something in yourself that you’re not able to recognize.

I might think that the first paragraph above should prevent me from being here. You might think so as well. But someone (*cough* Shelly) didn’t, and pushed me to do something that I’ve been going back and forth about for longer than I care to admit or remember. Every excuse in the book, and some newly created were used.

Here’s my mission for this, and my advice to you. Listen to that person. Maybe not the first time, maybe not even the second time. But if someone thinks enough of you to keep trying to get you to do something, do them and yourself a favor. DO WHAT THEY ARE ASKING! Write a blog post. Run a 5K. Take a consulting job you keep refusing. Climb a mountain. Jump out of that tree over there. Whatever it is, if it’s not going to endanger you personally or psychologically, DO IT. If it ends up not working out, that’s perfectly fine—no harm done, right? But if it does work out, then you now have a new skill or experience that you can add to your life story, not to mention the invaluable feeling that comes when you accomplish something challenging.

Then, whatever you do, don’t forget to say thank you for a lesson learned.

Thank you, Shelly. And thank you to all of those who have helped me. Thank you more times than I can say, for more than I could possibly give back.

Mark’s day job is as a customer service rep for Verizon Wireless. You can usually find him on Twitter using the clever handle @MarkSherrick (thank you, Shelly), and stalk him on his blog, Marking Out, as often as you would like.

Image by daveynin via Creative Commons