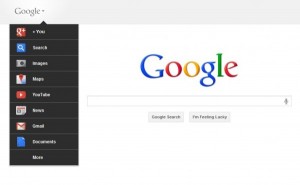 The Google team has been busy with a host of new design changes, including the implementation of a large, clickable Google button—called the Google bar—that now appears in the top left corner of any Google page.

When you click the button, you’re presented with a drop-down menu that gives you a variety of quick links to various Google sites: Google+, search, images, maps, YouTube, docs and more. You may have already noticed that the Google bar replaces the previous navigation menu, which included links to Google sites and apps on the left-hand side and Google+-related links on the right. For a more in-depth look at the Google bar, here’s a quick video tour from the Google blog:

We spend a lot of time on Google sites, and are already big fans of the new Google bar—especially since Google+ profiles are the first option. Google has made it easier to access their apps, and by making Google+ the first option, Google has given a clear sign that it continues to push its evolving social networking platform.

Not only are we fans of Google, but we’re sticklers for user experience—and, as evidenced by the new Google bar, it seems Google’s engineers are dedicated to improving the brand’s UX. Consider this quote from an explanatory video created by Google (and shared above.): The Google bar “is a little thing that makes switching apps and sharing simpler for you.” Plus, as the Google team points out, the changes to the basic Google navigation menu have paved the way for future enhancements, too, a statement that indicates that Google bar, like other Google features, continues to be a work in progress.

The Google bar joins a host of recent design-related changes, including new user interfaces in sites like Google Mail, YouTube, Maps and Translate. The only downside? Google bar isn’t currently visible in Apps accounts (which we have.) The Google bar rollout occurred over several days, so our fingers are crossed that the new feature will soon be available in apps.

In the meantime, if you spot it, feel free to leave us a comment below. We’ll keep our eyes peeled, too, and will post an update as soon as it’s available. Feel free to leave us your thoughts on the new bar, too. Do you like the direction in which Google is heading with its user interface changes?