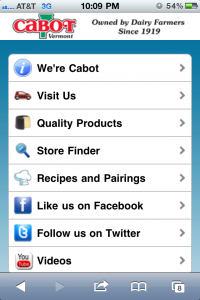 We write about the importance of mobile websites for businesses on a regular basis and every time I think I can’t be surprised by the fact that a business doesn’t have a mobile website, someone proves me wrong. This time, it was AT&T. You know – only one of the biggest suppliers of mobile connectivity there is. Arrrrgh.

As my fellow iProduct loving friends might already be aware, the most recent iterations of the iOS software have added some significant new bells and whistles for iPhone users. One very cool thing that Apple finally got around to doing in the iOS4 release is allowing iPhone owners to utilize their phone as a personal hotspot. The iOS update with the hotspot feature was released back in February but, because it occasionally takes me a while to get with the program, I didn’t actually look into the hotspot until I upgraded to iOS5 last month.

Remembering some murmurs I’d heard about hotspots and the like, I pulled out the old omnipresent iPhone and went online to investigate cost, available bandwidth etc. Dude! I couldn’t believe it!

Of all the businesses on the planet NOT to have a mobile version of a website AT&T — you’re killing me. Channeling Alanis Morrisette here, isn’t it ironic,? I mean a mobile provider with no mobile site…am I right?

Color me intrigued – further investigation was impossible to resist, so I dug in. Out of four major carriers (AT&T, T-Mobile, Sprint and Verizon) only two out of four have mobile sites! Sprint and Verizon have mobile sites that allow their consumers to shop, check coverage in the area or manage their accounts from their mobile devices. I know that AT&T and T-Mobile merged in the last six months, but you’d think that allowing consumers to access and manage their accounts directly from their phones would be pretty high on the “UX must have” list.

Here’s a look at the good, the bad and the ugly:

I think what is most striking about this experience is, of all businesses out there, you would think mobile providers would especially recognize that 25 percent of the population accesses the internet ONLY through their mobile devices. Further, they, of all people, should know that 81.3 million people used their mobile devices to make payments in 2009, and that M-commerce is predicted to reach $119 billion in the US by 2015.

So tell me AT&T, why in the world do you not have a mobile enabled site? Am I crazy or is AT&T missing out on a big payday?

P.S. See that image up there in the top righthand corner? That’s the mobile website of our friends at Cabot. Clean, uncluttered, easy to navigate. Want to know where to start for your own mobile website, aim for something like this?