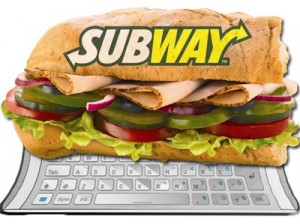 Subway launched a web series today with a one-hour special on NBC that links Therapy, Golf and Sandwiches.  Subway is once again leading the way in the fast-food category with a new social media savvy marketing initiative. The sandwich gurus latest campaign will be launched on multiple platforms, including web and in-store media.

Subway has paired up with Brian Baumgartner of The Office to produce “Golf Therapy: Life, Lessons and the Pursuit of Par.”  The series will launch today on NBC  before the final round of the “U.S. Senior Open” golf tournament, and will spin-off as a web series.  The marketers at Subway will re-purpose the web series for a library of shows that Subway will air on screens the chain is installing in its 23,000 stores across the U.S.

“Golf Therapy: Life, Lessons and the Pursuit of Par” revolves around Baumgartner  telling his therapist about of his nightmares surrounding an appearance at a celebrity golf tournament.   The actor’s anxiety about his annual appearance at the Lake Tahoe celebrity golf tournament, the American Century Championship is our gain because the series is educational, funny and very smart marketing for Subway AND Kansas City based American Century.

Variety reports that Subway using the “Golf Therapy” series as a way to promote its Famous Fans program, made up of athletes who love Subway.

“Everybody talks the ‘content’ word,” Tony Pace, Subway’s chief marketing officer, told Daily Variety. “Having content that we can push out on different channels would be a big benefit for us and the people we work with. But you have to find a balance of entertainment and marketing messages. You need to have a little entertainment or you’ll get tuned out.”

Brilliant move by Subway! The fast food chain is way ahead of the competition, with the Subway TV network and online entertainment.  If you want to see a clip of the Golf Therapy video, check out the Subway Facebook Page.