We made it over the hump this week and here is the latest marketing news to help you stay in the loop. Highlights of this week include digital advertising reaching new heights, Pinterest’s “Interest Ideas” button creating great new potential, LinkedIn’s new Account Targeting feature that will help advance AMB strategies, Instagram reaching over 700 million active users, and Twitter seeing audience growth and revenue decline at the same time. Let’s dive in.

The IAB’s revenue report, generated by PwC, showed that the total increased 21.8 percent from what advertisers spent on digital advertising in 2015. One of the biggest driving forces in the digital media and marketing world is mobile. “Consumers are on their phones, their mobile devices all the time, so marketers with their brand dollars are following them,” said David Doty, evp and CMO at the IAB.

IAB declined to list the 10 companies who generated 73 percent of the 2016 fourth quarter results However, a report from eMarketer earlier this year guessed some of those companies to be Google and Facebook, followed closely by Yahoo, Twitter, Snapchat and Amazon. Even though there are around 10 companies who always dominate the market, the impressive results showed that 31 percent of the fourth quarter growth was from businesses outside of the top 10. These results show that digital is having a significant impact on the top 10 companies, as well as moving other companies into the limelight.

Focusing on mobile, the report showed 47 percent of ad budgets went to search, 38 percent went to banner ads, and the remaining 15 percent went to video or other ad formats.

Lastly, but also important, digital audio was included in the report and made up $1.1 billion in revenue. Read more details of the report in this article from Adweek.

Pinterest has rolled out a new feature that should be copied by all feed apps. Seriously, this is one of the best new social app features that has rolled out in a long time. In February, Pinterest started testing a new button called “Instant Ideas” and is slowly rolling out to all users.

Essentially, the Instant Ideas button is a “show me more like this” button but it’s designed to live within a feed instead of on a separate tab. This button appears on every image on Pinterest’s home screen and when tapped on a post, it instantly injects around a half-dozen pieces of similar content right below it.

For a feed currently showing a spaghetti recipe, a fashion article, home improvement ideas, and a self-help book, you can now tap the circle button on one of the pictures and instantly see six more pictures relevant to the one you are looking at. If you tap the button a second time, you will see six more similar pins shuffled in.

Even more clever though, the rest of your feed is still waiting for you, just below the similar content you selected. There’s no need to hit a back button or navigate different tabs, everything is available on the same feed.

This rollout shows an unprecedented level of choice while scrolling the infinite feed so many of us love. This button simply gives users a way to dive deeper into a topic without getting swallowed by a rabbit hole. Every app with a feed needs this same feature.

It’s easy to imagine the greatness that would exist if Twitter users could instantly see more tweets about the same link or hashtag, and then return to the main timeline by scrolling down. On Facebook, the button could surface similar posts from keyword, location, event, or content type.

It will be interesting to see what monetization opportunities arise. The Pinterest Interest Ideas button will most likely deepen engagement and lengthen browsing session times while also generating data on user intent and interests. Also, ads related to the tapped post could be injected alongside the organic content. With the amount of time spent scrolling through feed apps, Pinterest has made great strides with this rollout. Check out the picture below to see how “Instant Ideas” works. TechCrunch 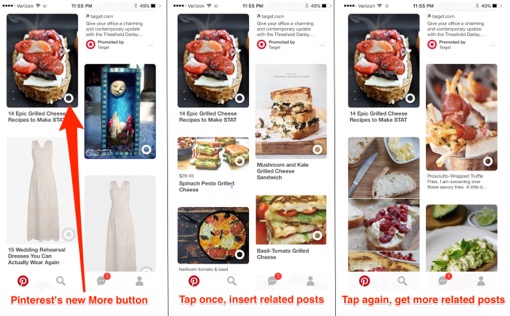 It’s time to step up your advanced account based marketing (ABM) strategies with LinkedIn Ads. On April 24, LinkedIn released a new feature, deemed fantastic, to their ads product that is a game-changer for B2B companies. Called Account Targeting, this feature allows you to upload a list of up to 300,000 company names and to target your ads ONLY to those companies.

While the ability to target companies on LinkedIn Ads has always existed, we were limited to 100 companies targeted per campaign, and each one had to be typed individually. So, for those who wanted to target the Fortune 1000, that meant 10 different campaigns with 1,000 individually typed company names. If you haven’t used this feature, you can imagine the strenuous effort extended for minimal results. This update is significant because now you can upload a .csv form list with up to 300,000 company names and apply that targeting on top of all of LinkedIn’s existing filters.

This increases opportunity 3,000 times! So how can you make this work for you? Here are some of the ideas shared by AJ Wilcox:

These ideas work with LinkedIn’s newest feature to help companies enjoy some of the highest-quality leads.

Nearly doubling in two years, Instagram now has over 700 million active monthly users. Even more impressive, it reached 700 million because it added another 100 million users in just the last 6 months. Often compared to Snapchat, this newest surge further contrasts the difference between the two platforms, with Snapchat just now reaching only 158 million daily users. Earlier this month, Instagram reported its Snapchat clone—Instagram Stories—now has 200 million daily users. While this number is controversial because Instagram counts users who are viewing Stories as active even if they aren’t posting, the drastic difference between the two applications is obvious in the numbers.

According to Instagram, they’ve “made it easier than ever for people across the globe to join the Instagram community, share their experiences, and strengthen connections to their friends and passions…with new features like stories, live video and disappearing messages in Direct, people now have more ways than ever to express themselves and feel closer to what matters to them.”

Starting in October 2010, Instagram has shown steady and even exponential growth over the years and continues to grow in popularity as they add more user-friend features. Source: Adweek

While Twitter’s audience is growing, ad revenue and total revenue are shrinking. Results from Twitter’s 2017 Q1 earnings show that audience growth is no longer a problem for Twitter, which is great, but is only a small relief compared to the host of new problems the social media platform is facing.

Twitter’s overall revenue has declined year over year for the first time since its start and its advertising revenue showed decline for the second straight quarter in a row. While some consider this bad news, Wall Street analysts are not concerned, and say that Twitter actually beat the low expectations they had. They are also encouraged by Twitter overcoming audience growth struggles that have existed over the last few years.

Twitter sees the audience growth as a positive, expecting it to eventually translate into revenue growth. The evidence that more people are actively using Twitter for news is proving that Twitter is making good on its mission to be where people turn to understand what is happening in the world.

Helping aid in Twitter’s success was a couple of noteworthy causes. First, 45 million people tuned into Twitter’s premium live shows. News programs by Bloomberg and Cheddar and syndicated NHL games were at the top of those lists. Second, live video has helped video ads become Twitter’s “single largest revenue-generating ad format” according to the company.

While some people worry about the loss of ad revenue, Twitter appears to be confident in their growth opportunities and continuing to work on increasing over the upcoming months. I, for one, will be interested to see where they go. Source: MarketingLand

Christy Bohrer is three classes away from an MBA in Marketing, a Wichita State University Shockers fan, and plays a big role in handling day-to-day social media community management for a wide variety of V3B clients. She’s also quite fond of numbers—which makes her an even more perfect fit for our team—and she is part of our project management team working on reporting and data analysis for V3B clients on a monthly basis. In her spare time which, when you’re the parent of two children under the age of six, is largely a pipe dream, she likes reading, music, hanging out with family, camping, traveling, and musicals/shows.