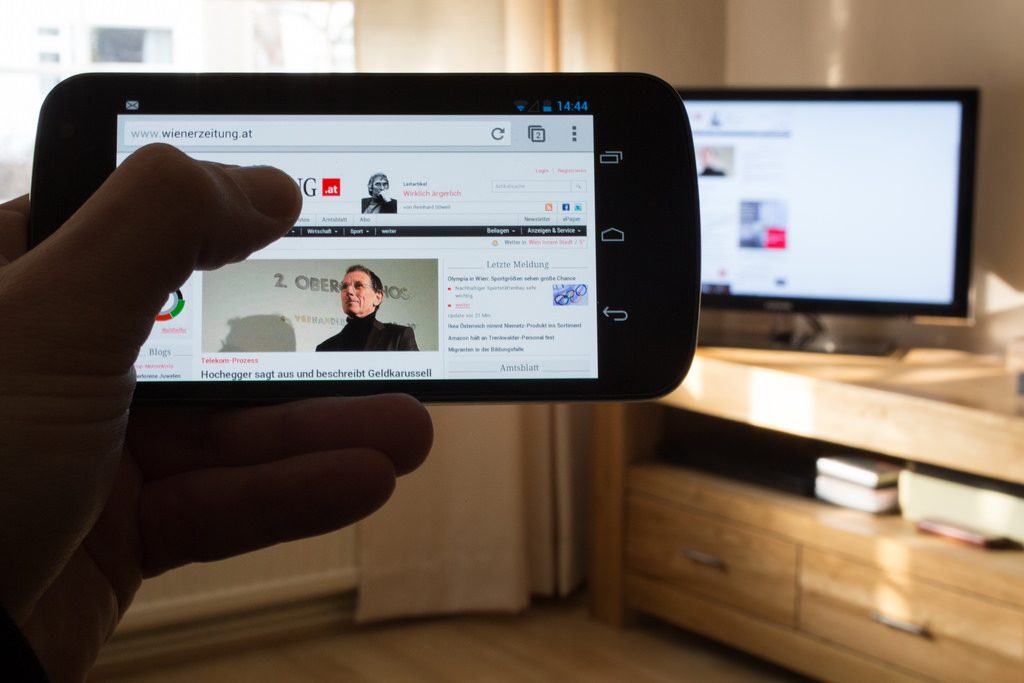 The media landscape has grown increasingly fragmented in recent years. No longer restricted to just television, with the addition of laptops, tablets, and smartphones, most consumers have multiple platforms from which to view media. Increasingly they are looking at two screens at the same time.

Social media has also completely transformed the ways in which people consume content and receive brand messaging and marketing. “Second screen social” refers to using a device for social media activity while watching television at the same time. Although this phenomenon creates challenges for delivering brand messaging to consumers, savvy marketers will find opportunities to better connect with customers and brand enthusiasts at this intersection of television and social media.

The Battle for Attention

The where, when, and how of our media diets has change radically in the past decade, and continues to evolve. Other than those over age 65, Americans are watching less and less traditional television every year. 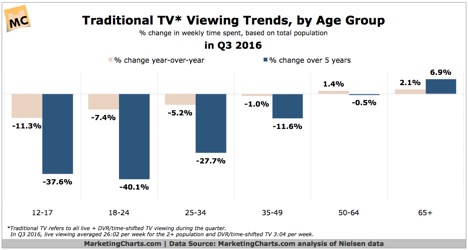 At the same time, the number of television networks has exploded. In 2014, Nielsen found that the average U.S. household received nearly 200 television channels. Add to that total, viewing options available from web-based and streaming content providers like Hulu, Netflix, and Amazon Prime. Next, throw social media into the content provider mix. It is no surprise then that traditional television watching continues to decline, and ratings for broadcast programming have plummeted.

The decline in traditional television watching has been more than offset by a sharp rise in media consumption via other platforms, as well as devices. This explosion in choices has served to only increase consumer appetite for content. Although this forces brands and advertisers to come up with new approaches to messaging target audiences, smart marketers can find creative ways to communicate with their best customers.

Although the stereotype of a power social media user might be young Millennial men, according to Nielsen, the heaviest users are actually Generation X women (ages 35 to 49) – a group with strong purchasing power. These users spend an average of seven hours a week on social media and are most likely to be brand advocates, with 29 percent saying that they think it important to support their favorite companies on social media. 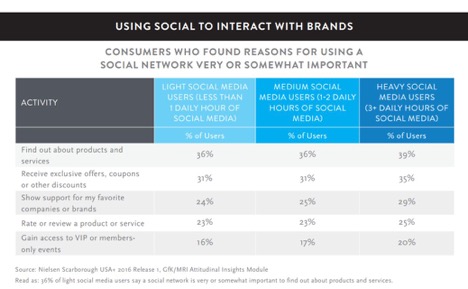 Given that there are only so many hours in a day, it is no surprise that television viewers are increasingly checking their social media feeds at the same time. The proliferation of devices facilitates this simultaneous usage. Nielsen estimates that 96 percent of U.S. households have television. Device ownership among adults is as high as 87 percent for smartphones. Thus, the overlap between television and social media continues to grow. 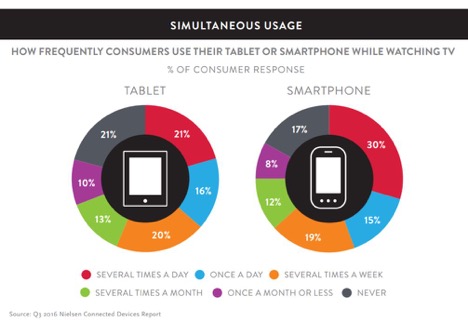 There is a wide range of ways in which users engage with social media while watching TV. The top activity is looking up information about the characters or show they are watching. Multi-taskers also interact with shows through actions such as prompted voting via social media or sharing thoughts about the television content. However, these users also do two things at once and engage with their social media in addition to their television viewing, and share photos or check friends’ timelines.

Simultaneous interaction peaks around special events such as sports championships or award shows, however there are regularly scheduled series that drive second screen social spikes, as well. Sunday night football and scripted series such as The Walking Dead are primetime drivers of social media interaction.

Media fragmentation requires creative approaches to reach target audiences. Second screen social activity offers a way to market to both television viewers and social media users rather than either or. You can time social media advertising to display during airings of shows that have high social media engagement. (Read the full Nielsen social media report to see the top 10 ranking) Or, if you advertise on television, be sure to include these shows in your media buy and then encourage viewers to share a brand-related hashtag. That social media content can then live on past the show airing and extend your marketing message.

Your customers are using social media. Whether they’re 11 or 51, they are a prime audience for purchasing if you market to them in the right way. Understanding trends like second screen social can help make your marketing smarter and more effective.

Read Social Studies: A Look At The Social Landscape.