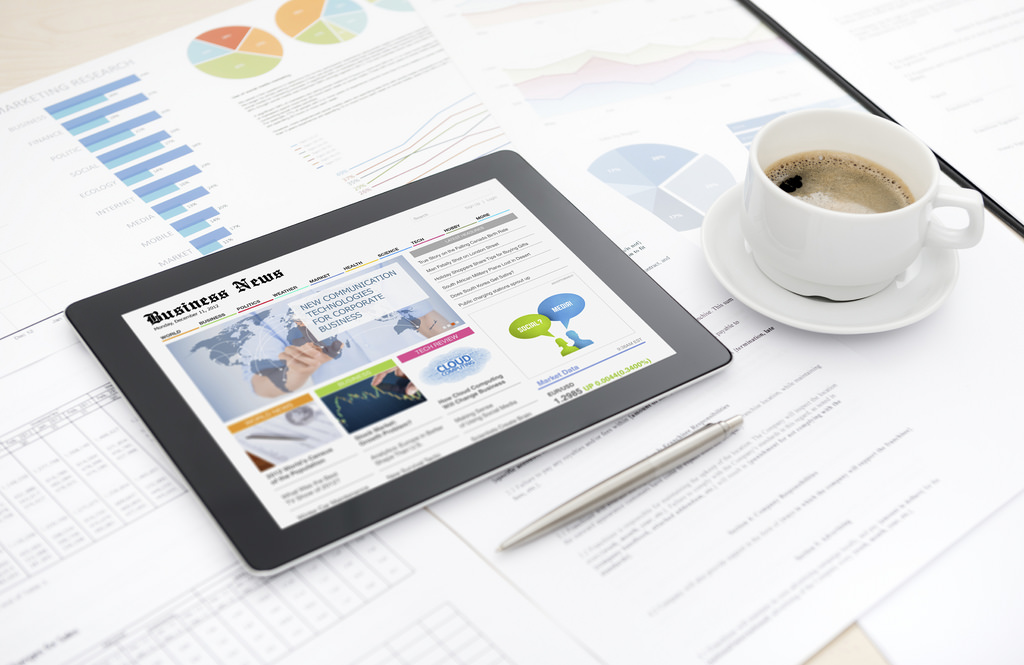 Where do you go for your news today? The chances are good that you get your news online, and from one of a limited number of the publishing giants according to a recent report, which suggests that almost half of the U.S. share of page views is captured by just the top 10 media publishers. But what does that mean for the smaller regional business publications? How do they compete against the likes of MSN, Disney, and Time Warner and survive in an ever more competitive online market?

Before attempting to answer that, let’s take a look at the size of the challenge facing publishers in general, and regional business publications in particular.

The report mentioned above from market intelligence company SimilarWeb, examined page views to compile rankings of U.S. publishers and publications during 2015. The results confirmed that the top 10 publishers comprised almost half (47 percent) of the entire output, when compared to the next 140 publishers. This graphic from the report illustrates the breakdown and the composition of the top 10. 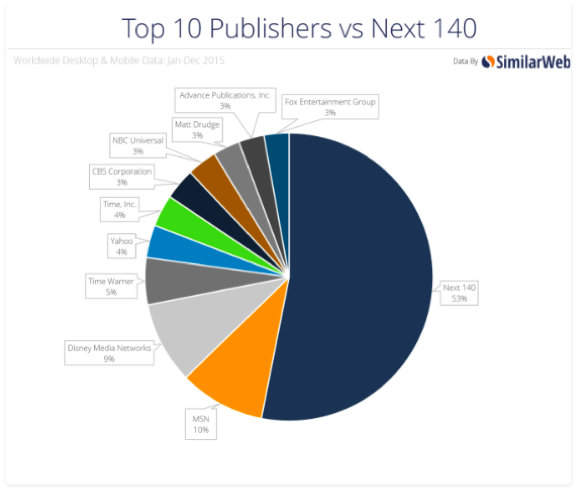 The top 10 media publications, when measured by page views, were dominated by MSN.com and by Espn.go.com (part of the Disney Media Network). As this graphic illustrates, even big hitters such as CNN, Fox News, the New York Times, and Huffington Post trailed well behind the huge numbers of views generated by the top two. 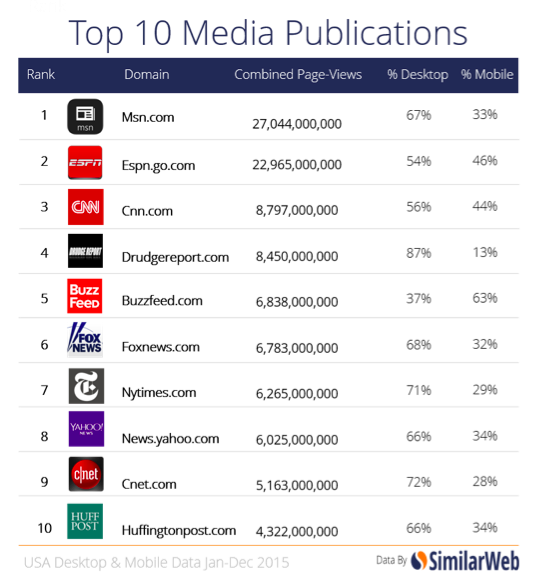 It’s worth noting that despite our preference to be joined at the hip to our smartphones, desktop views still dominated, with the exception of BuzzFeed, which bucked the trend with almost two-thirds of views on mobile.

So against that backdrop, when it’s hard enough for a major publisher like the New York Times to adapt and survive, how can the regional business publication survive? They need to think differently that’s how. They need to move away from focusing solely on subscriptions and ad sales as a way to support the business and think about how they can provide other business value—value that they are often in an exclusive position to deliver incredibly well. Here’s why: when you live and work in a community, chances are good you don’t turn on the TV or radio to find out what’s happening in the business community, you read your local business publications. If they go away, where do you get your business news? So for regional publishers, finding ways to adapt their business models and stay relevant is crucial—as much for them as for the communities they serve. Here are some things they might do to make that transition:

Podcasts. Consumption of content by podcast is growing, and growing fast. Just take a look at the latest figures from Edison Research, which shows that more than one in five (21 percent) Americans say they have listened to a podcast in the last month. That compares to just one in eight (12 percent) three years ago. 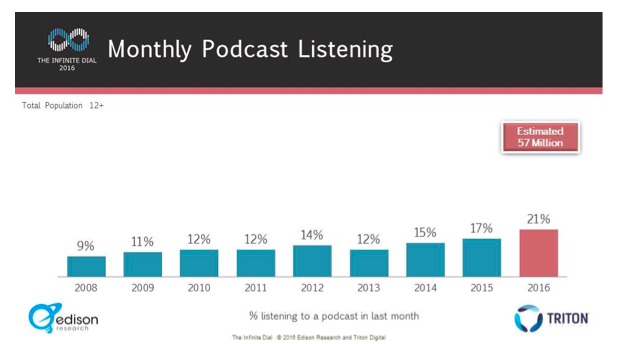 A podcast is easy to produce for any small business, giving it a nimbleness and flexibility to react to events that its larger rivals can’t match. The format provides a platform for a publisher to demonstrate expertise in their particular field, while adding a personal touch and authenticity that a reliance on display advertising lacks. Moreover, podcasts provide a way to tap into a publication’s readership and feature local business owners or entrepreneurs as guests, reach outside their market to feature experts on topics of interest to their audience, and even offer sponsorships as a revenue generator. Podcasting is a great way to connect with an audience, particularly when done regularly allowing your listeners to become familiar with the voice and presentation style.

There is one other feature of the podcast that I particularly like—a podcast is an on demand piece of content. It can be listened to on the train during a commute, or during a session on the treadmill. You don’t have to tune into a screen or a paper or magazine to digest the material in the podcast, you can experience it and be doing something else at the same time.

Video. The integration of video into news reporting obviously has all of the potential benefits that podcasting brings, with the added bonus of allowing for more robust social sharing.

If you are not convinced yet that video should form a part of your content creation and distribution strategy, just consider these stats collated by Insivia.

With the advent of the Facebook Live API, publishers can use live video streaming on Facebook as yet another way to reach their audience and create experiences that people want to be a part of. Platforms like Periscope and Meerkat have also made live-streaming incredibly popular. Since social networks are where the people are, and also where the people get a large portion of their news, it’s the opportunity to speak to a whole new generation of business leaders and business news consumers.

It also is worth a mention that as younger generations move into the workforce, their consumption habits, and preferences should be noted and publishers should adapt accordingly. We see that today with brands like Forbes experimenting on Snapchat and the New York Times creating experiential video stories. It’s no surprise to anyone that younger demographic groups are big fans of visual content and video. Serving up content in video format, hiring journalists who understand the power of social media and building strong networks and who are as comfortable in front of a video screen as they are writing written content, is good business.

Social strategy. The March 2016 edition of SimilarWeb’s analysis of U.S. media publications highlighted why publishers need to know where their social traffic comes from. The analysis looked at the source of social traffic for the top five publications for the month and found that while Facebook dominated, it’s a more complex situation after that. 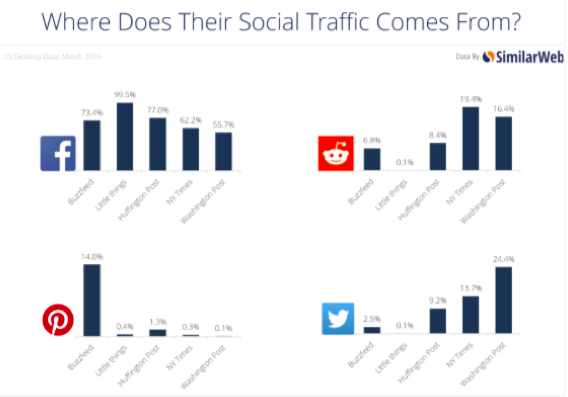 Traffic sources vary according to the publication. For instance littlethings.com is almost totally dependent on Facebook, while for BuzzFeed, Pinterest is a rich source of social traffic. For the New York Times, Reddit provides more traffic than the rest, and for the Washington Post, Twitter sends more traffic their way.

The lesson for publishers of all sizes is that they need to know their audience and deploy their assets (and sometimes even their editorial teams) in a way that engages with them.

Events. I have a friend who is the publisher of a regional business publication. Whether others have struggled, he’s adroitly managed to adapt his business model to feature a variety of events intended to attract and serve different facets of the business community, delivering value by offering ongoing education, mentoring opportunities, and the networking that’s the lifeblood of any business community. He’s also been very adept at understanding that there’s no one formula for success when it comes to an event, and experiments with different kinds of programs as well as offerings at different times of the day, designed to suit the individual preferences of his target audience.

Events offer the opportunity for sponsorship and you can also integrate mini trade shows or exhibits into an event, allowing key local businesses to participate.

Partnerships. Sometimes it’s hard to move past the “we make money from subscriptions and from advertising” model but, for today’s businesses, they are looking at closely at every budget dollar with a view toward what delivers the best ROI. And the problem with display advertising is that it’s incredibly difficult, if not impossible, to measure the ROI that a particular ad, or an ad campaign, delivers. Smart publishers realize that their clients (and readers), most of whom are in the B2B space are looking to grow their businesses—that means they are looking for leads.

That’s where their list—the business database that they’ve likely spent years compiling and fine-tuning—can be an incredibly valuable business asset. For publishers, partnering with demand generation companies looking for these kinds of prospects on a cost-per-lead basis could prove to be very beneficial to both parties.

Provide valuable in new ways. Following on the lead generation idea, publishers are not only in the business of reporting and informing, if they wanted to be, they could also be in the business of educating. They’re a trusted resource in the communities they serve (online or off), they’ve got a captive business audience with interests and needs when it comes to information and resources. With a small shift in focus and internal resources, publishers could easily develop and create downloadable assets that go beyond news and which educate their business customer base. By making these assets gated, but allowing non-subscribers to access them, they could build a list of prospects to nurture moving forward.

And it probably makes sense to mention that in bringing a program like this to fruition, there are sponsorship opportunities and/or vendor partnerships that could be explored, which introduces another potential revenue stream.

Writing at Media Post Mobile Insider, editorial director Steve Smith, is of the opinion that as we consume more and more content on mobile devices, that just about everyone in news publishing is rethinking their approach. He sees a world where mass media may continue to fragment, without the coalition into standard practices that we have been used to. He has an interesting take on the future saying, “We are in a post-industrial, post-mass media era where the modes of consumption can be personal and idiosyncratic, and the technology allows for that diversity of styles. What we used to call “The News” will now mean many different things to all of us.”

Whatever form news publication takes, standing still is no longer an option for smaller regional publishers who are trying to compete with their bigger, and better-resourced rivals. The reality is that even those bigger, better-resourced rivals, and the industry as a whole, are likewise struggling with developing a new business model that doesn’t rely solely on subscribers and ad sales.

For the regional business publications that are the lifeblood of many of our communities to survive, they need to think on their feet, be flexible, and find ways to fill the gaps that the big hitters leave by providing valuable resources to their local communities. I think it can be done. What about you?