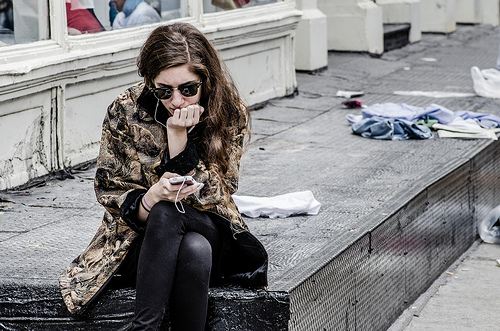 Religion has pretty much always been about the communion, if you will, of communities; the sharing of faith, values and beliefs, and of course coming together to worship and support one another, in good times and bad. Now, thanks to the global reach of the Internet and the power of social networks, that can happen on a broader scale. That’s why seeing news of a new social network aimed at connecting Christians comes as no surprise

It’s a no-brainer that faith and social media just of go together. For instance, there are any number of Facebook groups, Twitter accounts, YouTube channels, and Instagram pages designed to bring like-minded people together and to give them a platform to express their faith. Lets face it, even Pope Francis has an active Twitter feed and, I might add, more than 7 million followers (you go, Papa!). And while we’re not talking about a dating site here (there are already loads of “religion based” dating sites online), this latest offering will be a spot where Christians can mingle—in fact, it claims to offer the best features of all the most popular secular social sites, without what the founders describe as “secular distractions.”

Instant Christ, just launched on Android and soon to be available on iOS (funny, isn’t it usually the other way around?), is the brainchild of entrepreneur Donald Cyprian. According to Cyprian, the purpose of Instant Christ is to allow users to “connect with God and our brothers and sisters in Christ instantly via our cell phones.” As you will see from this menu from their website many of the features will be familiar to social media users. 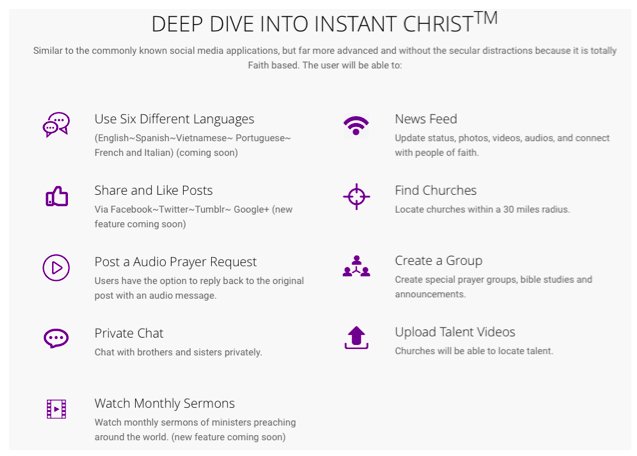 In a blog post Cyprian sets out the ways that the app can help Christians, (and, they say, people of other faiths as well), to connect.

According to the company website, the ambition of Instant Christ is to provide a platform for “Christians and people of faith” to connect worldwide in a safe and positive environment. It will be interesting to see how they maintain and moderate that environment as the app scales up.

According to research carried out last year by Pew the demand for online faith communities is already there. A survey conducted among more than three thousand U.S. adults about their religious activities suggested that:

The gist of the survey was that online religious activities complement—rather than replace—more traditional religious observances.

Faiths of all Kinds are Getting Social

It’s not just Christians who can use technology and social media to connect with others of their faith. A quick look on the Android app store reveals a plethora of apps for all the major faiths including Buddhism, Hinduism, Islam, Judaism, and Sikhism. There are even apps for atheists and Satanists!

On a wider scale, we are also seeing new social networks springing up aimed at connecting specific religious communities. For instance Ummaland, a social network for those of the Muslim faith, was launched in 2013. The founders, according to a recent report from BBC Technology, “are creating Ummaland on Islamic values, no small talk, no boasting, no gossiping and backbiting but focusing on the message that really matters.” With a current membership (according to their website) in excess of 340,000, they might not yet have the membership numbers of the big social media giants, but they certainly do seem to have an active community that is gaining traction.

Meanwhile in Brazil, a country with the largest Roman Catholic population in the world, a group of evangelical Christians have set up a new social network aimed at rivaling Facebook. Facegloria, which claims in excess of 100,000 users since its launch in June of this year, includes a lengthy list of banned words and content that the founders say people might find objectionable. As co-founder and president of the network, Acir Fillo said recently, “There is no discrimination on Facegloria. Everyone can be members: Catholics, Muslims, atheists, gays, etc. However, everyone has to respect the rules and respect the principles of the family. Christian principles. Respect. Facegloria defends the free expression of thought, the freedom of expression. But with respect.”

Attracting and retaining young people in religion is a topic I recently wrote about. That post—Millennials Are Losing Their Religion, and Driving Massive Tech Changes In Houses of Worship—explored whether young people are less interested, and leaving, religion as a whole, or are just not joining organized religion in large numbers today. Interestingly, the previously mentioned Pew research shows that young adults (18-29) are twice as likely as the “over 50s” to share their faith online.

While that makes sense at a basic level, as Millennials are also much more likely to be socially active online anyway, it does suggest that the potential is there for young people to be more involved in faith based activities. That, however, depends on Millennials liking what digital religion has to offer. There seems to be a clear demand from followers of many faiths for online religious communities that inform, advise, and provide support. It will be interesting to see how faith apps and social networks progress, particularly as they grow and wrestle with the dilemma of funding their continuing expansion in a way that is supported by their ethos.

What do you think? Have you tried out Instant Christ or another online faith community? Does the concept seem like an alien one or is it something that you could see yourself gravitating to? What do you think the future is for faith apps and networks; will they encourage a new generation to get more involved in religion? I’d love to hear your thoughts on this one.