Halloween today, the holiday season tomorrow. Let’s jump right in to the latest edition of “Things You Need To Know This Week.”

One in Four Shoppers Already Planning for Black Friday

According to recent polling, many consumers are already thinking about Black Friday.

BestBlackFriday.com found that 27% percent of U.S. Internet users who planned to buy at least one thing on Black Friday were already doing research about those items by October.

According to the survey, a significant amount of Black Friday research will be about electronics. Clothing came in second, at 26 percent, while toys and video games were third, at 17 percent. No surprises there, based in general upon data about what people prefer to shop for online.

For the first time, Americans will do most of their holiday e-shopping on mobile devices

According to projections from Adobe, this holiday season, the majority of online shopping visits in the U.S. will be on mobile devices.  Adobe also projects that almost a third of all sales will take place on mobile devices. Again, no surprises. We know that consumers often start the buying process on mobile devices, then revert to desktop to actually make the purchase. Seeing that purchase number on mobile go up to 30+ percent means two things: consumers are getting more comfortable buying on their devices and retailers are creating more streamlined user experiences, making the process quicker and easier for consumers to both start the process on a mobile device, and finish it there as well.

According to a February 2015 CTIA-The Wireless Association study conducted by The Harris Poll, many U.S. smartphone and tablet owners trust their banks with mobile security.

Among those satisfied with bank-provided security measures, 54 percent believed such measures were enough to protect them. Another 15 percent felt other defenses were too complicated or difficult to use.

When it comes to banking, people trust enough to believe that banks can protect them while on mobile. When it comes to other issues of mobile security, smartphone and tablet users seem to have gotten a bit more serious over the past couple years.

Wearable Usage To Grow by Nearly 60 Percent This Year

According to eMarketer, the wearables market will continue to see double-digit growth. In 2015, over 39 million adults in the U.S. will use wearables, including smart watches and fitness trackers. That’s an increase of 58 percent over 2014. Note that in the holiday shopping data above, wearables are high on the list of items consumers are on the hunt for.

Wearables are currently most popular among US adults between the ages of 25 and 44, who are the most involved in the movement toward data and fitness tracking. Long-term, older Americans are expected to be a bigger growth driver, as more wearable health monitoring devices hit the market with U.S. adults 65 and older seeing the biggest growth rates. This also makes sense from a health care standpoint, as wearables become increasingly incorporated into preventive health care for elderly and/or those in need of regular monitoring and assistance.

Even with solid growth rates, many consumers do not always see a clear or big enough value to motivate them to buy a wearable device. Shoppers are also price-sensitive. Because of these challenges, market penetration still remains low and will not grow as quickly as other device categories like the smartphone or tablet when they first launched. But it’s going to happen—there’s no doubt about that.

In its continued march toward search engine functionality designed to serve the masses, Facebook’s VP of Search, Tom Stocky, recently announced Facebook Search FYI, “Today, we’re updating Facebook Search so that in addition to friends and family, you can find out what the world is saying about topics that matter to you.”

The update is available in U.S. English on iPhone, Android, and the desktop version of Facebook, with availability to everyone else rolling out soon. 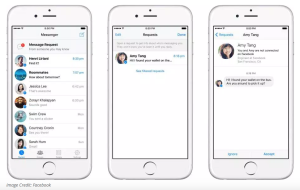 Facebook is starting to roll out a new way for people to contact you without needing your phone number. All they’ll need is your name and Facebook Messenger.

According to Messenger head David Marcus, only those messages you receive from those you’re connected to on the social network or whose contact you have on your synced mobile device will be routed right to your inbox.

Facebook wants the service to be the main place you go to not only communicate with your friends, but also businesses, and to get things done. The addition of Message Requests will likely be helpful as Facebook’s Messenger platform begins to evolve to bring in more businesses and integrate with third-party services.

The introduction of Message Requests will likely cause people to worry about their privacy; however, a benefit of this could be that message handling is now more streamlined, so that it’s identified as either a message from a contact (yes) or a stranger (no) and will be queued up for you as appropriate. I love Messenger. But I don’t want people I don’t know (or businesses) sending me messages. How do you feel about that? 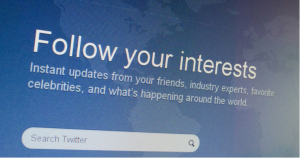 In an ongoing quest to gain traction, users, and stop the bleeding, Twitter’s support team announced this week the number of accounts you can follow has increased from 2,000 to 5,000. If you hit the new follow limit of 5,000 accounts and want to add more, Twitter may allow you depending on how many people follow you.

According to Twitter officials, “When you hit this limit, we’ll tell you by showing an error message in your browser. You’ll need to wait until you have more followers in order to follow more users—for example, you can’t follow 10,000 people if only 100 people follow you.”

This is a system that has long been in place, designed to keep some balance in the follower/following ration, and the only change here is that they’ve raised that baseline number. This could actually be a good thing for businesses working on growing their Twitter presence, but the very real need still remains to be relevant enough, and to serve up relevant enough, engaging enough content that entices a follower base to return follow. For many brands, that will remain a challenge, because their tendency is to use Twitter as a broadcast channel.

The company has updated its following rules and best practices to indicate that it’s not acceptable to mass follow a large number of accounts. It is also not considered acceptable to repeatedly follow and unfollow others, but that’s not a new change.

Periscope has come to the new Apple TV. The streaming service launched an Apple TV app this week, just in time for the retail launch of Apple’s new streaming box. Streams show up as large thumbnails that pop out as you hover over them.

Periscope broadcasts on the Apple TV also will take up the full screen of your TV, if shot in landscape. You’ll get a similar viewing experience as you do on mobile complete with floating hearts and scrolling comments.

When a broadcast ends, Periscope automatically shifts you to another broadcast with its Couch Mode feature. You can also leave the stream you’re watching at any time. This is pretty cool.

Scared Trick or Treater Peaces Out

Kid Gets Real About Math Problem