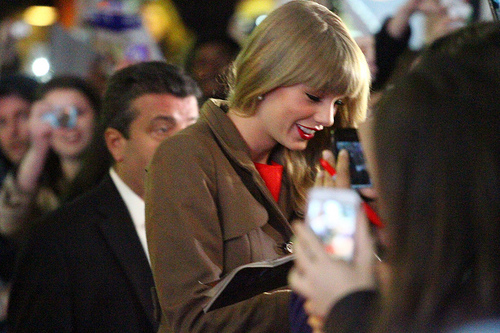 You’re famous for singing “haters gonna hate, hate, hate,” but to borrow from another of your lyrics, “fakers gonna fake, fake, fake.” While it’s commendable that you show compassion for your fellow artists by asking Apple for a piece of the online streaming pie, you’re willing to throw photographers – aka artists – under the bus with a restrictive contract that demands rights to their pictures in perpetuity without compensation.

Let’s get this clear from the start; I’m no Taylor Swift hater—not a huge fan, but not a hater. I just know hypocrisy when I smell it and, in light of the recent Apple face-off, it seems like a good time to have this convo.

Show Me the Money

I have to say, you crafted a fine letter last weekend to the bosses at Apple when you heard they weren’t going to pay royalties to artists during the three-month startup period of the company’s music-streaming service, Apple Music. You even had the chutzpah to tell bigwigs at Apple that you were holding back your latest album, “1989.” That got their attention and ended up doing good—for you and lots of other artists, and that’s awesome.

You and Apple probably have about a bazillion dollars between the two of you, so it’s nice that you decided to stick up for the little guy—the writers, producers, and artists that might not otherwise have the resources to get Apple’s attention. And by golly, you did it; you got Apple to blink and reverse its policy; no holding back the money while Apple Music gets its sea legs.

But this is where the hypocrisy begins and where you might want to consider stepping up. If you’re going to hold Apple accountable when it’s the right thing to do, it seems only right that you should play fair when you hold the creative purse strings. In the days since your post changed the course of music history, I’ve been reminded by my photographer friends that you, or at least your management company, doesn’t like to follow the same rules that you espouse when it comes to proper compensation.

In one of my previous lifetimes as a newspaper photo editor, I got to read a lot of contracts allowing press photographers and freelancers to cover musicians and other artists playing at local venues. The usual drill goes something like this: You can stay for the first two songs; you have to work in a designated area; and pictures are to be used for news purposes only.

PetaPixel.com posted a copy of the concert tour’s new contract that was tweeted by U.K.-based freelance photographer Joel Goodman for all the world to see. Your group, Firefly Entertainment Inc., has thrown some wrinkles into the traditional program. 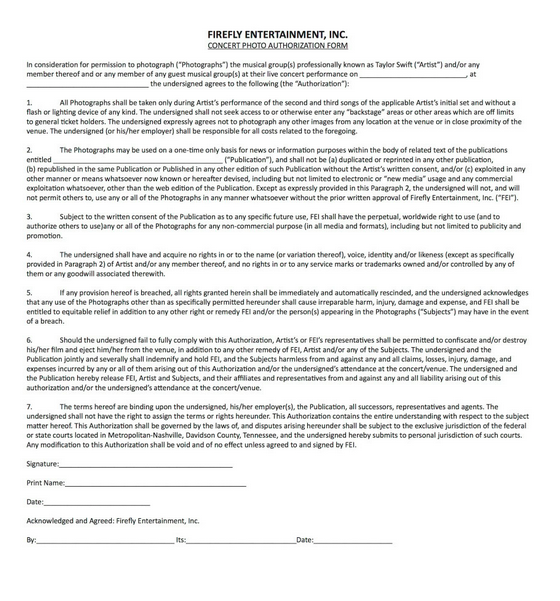 Among other restrictions, the contract states “(photos) may be used on a one-time only basis for news or information purposes.” OK, I’ll buy that. So no archiving of the images. No pulling them out for the next time your tour rolls into town and someone wants to run an advance story. No sharing with other publications within your media group.

Next up, your contract expressly prohibits photographers from posting the pictures they took on personal or professional social media accounts or pages. So, a concert-goer with an iPhone can post photos to Instagram or Twitter, but not so for the working photographer?

Item number three of the contract states that with written permission of the photographer’s publication, you and your minions shall have “perpetual, worldwide right to use any or all photographs for any non-commercial purpose, including but not limited to publicity and promotion.”

According to the PetaPixel post, anyone not complying is subject to a mandate that Swift or her representatives can “confiscate and/or destroy the technology or devices that contain the master files of the photographs and other images, including, but not limited to cellphones and memory cards.”

So, here’s the thing. You’re making history by standing up to Apple and saying “don’t shake down the artists.” That’s cool. But at the same time, you’re shaking down another set of artists—professional photographers—by demanding perpetual rights to intellectual property created by somebody else, with a side of “if you don’t like it, we’ll take your stuff or break your stuff.”

Sounds to me like Taylor Swift is asking photographers to simply “shake it off.” What do you think?