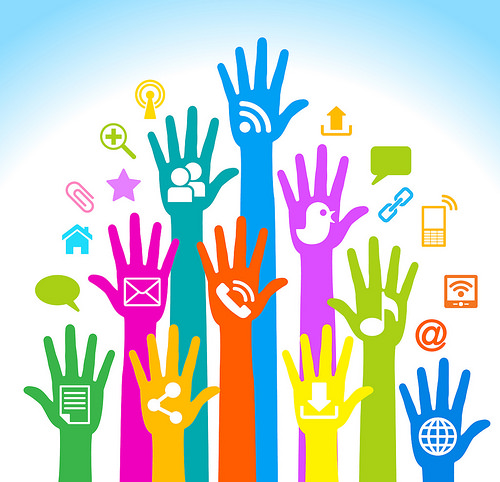 Welcome to the end of another week and the start of the second “unofficial” weekend of summer. Now, if only it will quit raining.

While some of you will be enjoying your kids’ “first week of summer break” (LOL *jokes*), for developers, it’s like Christmas at the moment. Both Google and Apple are holding their giant tech conferences this week, and there’s sure to be lots of interesting news coming out in the digital and mobile space (you can watch the Google opening keynote here).

Speaking of the digital space, let’s dive into what you might have missed during your busy week, and the things we think you might want to know about.

In what to me is not a surprise, it appears that Facebook is slowly winning the war when it comes to marketing and advertising. According to a recent report from Social Media Examiner, “more than half (52 percent) of marketers say Facebook is the most important social network they use to grow and market their business.” LinkedIn was pretty far behind, coming in at second place with 21 percent, followed by Twitter, YouTube and Google Plus. 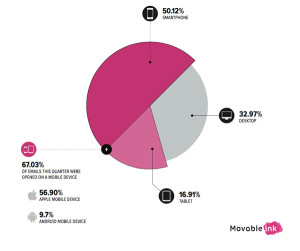 If you are still dubious as to whether mobile is impacting, and will impact, every single aspect of your sales and marketing strategy, it’s time to wake up and smell the coffee. An astounding two-thirds of all U.S. emails were opened via mobile in the first quarter of this year, according to a recent report from Movable Ink. Half were accessed on smartphones, and 17 percent occurred on a tablet, with the remaining 33 percent being opened on your traditional desktop.

The lesson here: Be optimized for mobile. Not tomorrow. Not next week. Yesterday! And don’t think you’re covered just because you’ve had your website taken care of. You need to be thinking about the mobile experience you serve up for customers and prospects and continually be working to fine-tune that and make it the best experience it can possibly be.

According to a new eMarketer report, U.S. media and entertainment industries combined are poised to spend $6.19 billion on digital advertising in 2015, up 18.8 percent from 2014. The media industry accounts for 5.8 percent of the total, and the entertainment industry will contribute 4.8 percent. Surprisingly, this leaves both industries duking it out for lowest ladder rung on digital ad spends. Only healthcare and pharma spend less.

One thing both verticals are definitely on top of, though, is mobile. According to the eMarketer forecast, “Advertising on mobile devices will account for 53.5 percent of digital ad spending in the entertainment industry for 2015, with desktops and laptops comprising 46.5 percent. Media brands are also devoting a majority of their digital advertising spending to mobile, with 51 percent.”

“Media and entertainment industries have been pretty aggressive with mobile,” said Chad Gallagher, director of mobile at AOL. “They’ve realized that consumers are on mobile devices more and more, especially at home.”

Video Will Dominate The Internet Over the Next Five Years

We talked last week about the current cable battles, and the surge in Internet dominated entertainment consumption, and it appears this is not a mere trend. Cisco is reporting that by 2019 more than 50 percent of the world’s population will be online, and a whopping 80 percent of that Internet traffic will be devoted to video. In fact, by 2019, 30 percent of internet-connected TVs are expected to be 4K.

“The cord-cutting household [consumes] more than twice as much data per month as non-cord-cutters,” Cisco exec Robert Pepper tells the Washington Post.

But, but but…what if we run out if Internet? “Global IP traffic is five times as big as it was five years ago, and will triple threefold over the next five years. Next year, worldwide IP traffic will reach 1.1 zettabytes per year (1 zettabyte is 1000 exabytes; one exabyte is one billion gigabytes). That number will go up to two zettabytes in 2019.” Think about those numbers. There’s a good chance you already have two, even three devices already hooked to the Web, and that number is just going to grow. I’ll give you an example from my own household. Five laptops in use daily, one desktop. Four tablets, five smartphones, four TVs and one iPod – all connected, all in use at least some portion of every day and connected to the Web. Good lord. It’s me and my people who are hogging the Internet!

Mobile Internet Revenue Predicted To More Than Double By 2018

Mobile’s hot, but smartphone sales aren’t, according to a recent TechCrunch article, anyhow. “Smartphone sales growth is slowing to less than 10 percent annually to 2018, and mobile networks saw just 5 percent growth in the last decade.” What does this mean?

It means, that despite scale and growth, mobile is still evolving. Mobile commerce is seen as the golden goose, which is why VCs poured more than half of $41 billion invested in mobile in the last year into mobile commerce-related sectors. Currently in third place in the revenue hierarchy, by 2017 mobile advertising is set to leapfrog in-app purchases, and move into second, as developers pivot to capitalize on opportunities.

Twitter introduced a new analytics tool to help marketers track and understand their customers and others interacting with them the social network. Audience Insights is pretty standard fare when it comes to marketing analysis, pulling in data on a number of different categories, such as demographics, interests, lifestyle, purchasing behavior, TV viewing behavior, and mobile footprint.

Audience Insights are available to any advertisers or analytics users, though limited to the U.S. at the moment.

Are you a brand on Snapchat? GET OFF! You’re right, I can’t tell you what to do, but you’re really getting on the last nerve of Snapchat’s CEO, Evan Spiegel.

“Philosophically, it is important that Snapchat is [a platform] built for people and not for brands,” said Spiegel, during an interview Tuesday on stage at the Code Conference in Rancho Palos Verdes, California. Except, of course, that every business has to be in the business of making money. And when Snapchat is where millions of people (and their desire for stuff) are, the ability to market to them can’t logically be ignored.

According to a recent MarketingLand.com piece, “Spiegel said Snapchat has nearly 100 million daily active users in “developed markets” and that 65 percent of those users create content daily. In another sign of how engaged Snapchat’s audience is, Spiegel said internally the company tracks “hourly active users.” He did not report that metric, however.”

Ok, it’s not that he doesn’t like brands, he just doesn’t like them trying to be people. “…helping brands with their organic use of the platform hasn’t been a priority, but he said that eventually the company will add a self-service ad platform to help marketers do what marketers do. ‘We will make it easier for brands to be brands,” Spiegel said, “and self-serve advertising is part of that.’”

There are loads of young buyers’ minds to grab on the platform, that’s for sure , and I doubt brands will be stepping back anytime soon, no matter what Snapchat’s CEO has to say about them.

Snapchat New Ways to View Videos Without Touching the Screen

Speaking of Snapchat, they’re working on a new way users can view video. Currently, to watch a video on the social platform you have to press and hold the screen—increasing user engagement, according to insiders. According to TheNextWeb.com, “It’s not known if users will need to tap the screen (or a ‘play’ button) or if videos will just start playing as you view them.”

That move seems like a no-brainer to me, I’ll bet we see it sooner rather than later.

We mentioned above that it’s developers’ Christmas at the moment. One tidbit that’s been released to press is that a buy button is “imminent” for ads in Google search. Speaking at Code Conference today, Google’s Chief Business Officer, Omid Kordestani, said “There’s going to be a buy button. It’s going to be imminent.”

Even with 90 percent of commerce still offline, Google hopes to reduce friction in online buying, and clearly believes there will a trend towards increased online shopping as the years go on. Because, as we already know, The Google rules—and knows—all.

Are You Consuming Your Coffee Correctly?

The Best Final Jeopardy Answer Ever!