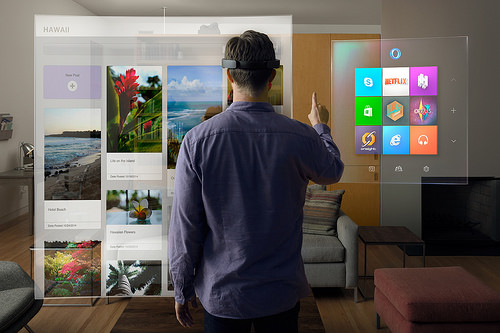 From Facebook making waves in the online video space to Microsoft announcing Project HoloLens, its new holographic goggles initiative, it’s been another eventful week in the world of marketing and technology. Add to that Twitter looking to enter the crowded payments processing space, and there’s much to catch up on.

Facebook has already demonstrated its ability to get content out in front of millions of people; helping a slew of media companies boost traffic for their content (for a fee, of course). Now in 2015, Facebook is hoping to do the same thing for video.

Major media companies have started to embrace Facebook as the go to place to post their video and coming to terms with the fact that Facebook may indeed be the future of publishing. Those publishing video directly to Facebook’s platform, which auto plays right in the Newsfeed, are already seeing the results.

As a prime example, BuzzFeed has almost entirely quit posting YouTube videos to Facebook. It has also increased the number of videos it is uploading. Upworthy has seen positive results too garnering over 239,000 shares for its last 10 native Facebook videos.

ESPN made the move from YouTube to Facebook this past November. Its last 15 native videos generated around 53,000 shares, compared to 6,500 for the last 15 YouTube videos. CNN and Huffington Post saw similar results when they switched.

As an example, here’s a video from SB Nation on the whole #deflategate “scandal,” depicting the Pats take on the situation. Which, by the way, is flat out hilarious. Note the more than 4.5 million views, the 119,000 shares and the more than 14,000 likes. Native video wins. Today, anyway.

Facebook isn’t alone. Twitter, Snapchat, and Instagram all have aggressive plans in the works to up their video presence, but none have the advantages of Facebook and its ability to tweak the Newsfeed to give video huge exposure at the expense every other platform.

The only missing piece is advertising, and that’s on the way–Facebook already has a revenue sharing deal in place with the NFL.

According to Max Kalehoff, Senior vice president of marketing at SocialCode, “They’re (Facebook) giving brands the ability to reach very, very large audiences that can also be the size of one. They can be in the hundreds of millions, but they can target them with the precision of one person and that’s really interesting. We’re starting to see scale that a while back you’d typically only see on YouTube when it comes to online.”

According to a study by JP Morgan Chase, 83% of U.S. Millennials have made an impulse purchase. This was most likely to happen on paydays or when browsing shopping websites. In those instances, their tendency to purchase items on impulse exceeded other demographic groups.

The study also indicated that Millennials were more likely to regret their impulse purchase after the fact.

The instance of impulse purchases was higher among women ,with 20% of female shoppers citing “retail therapy” as the main reason for impulsive shopping, compared with just 9% of males. Almost 70% of women and 60% of males made impulse purchases because of sales.

Though male shoppers made slightly fewer impulse purchases than females, when they did shop impulsively, 50% said they were likely to spend on electronics, compared with only 27% of female shoppers. For female shoppers, 61% said their impulse buys were mostly clothing, while only 43% of men said clothing lured them to impulse shopping.

Twitter Is Looking to Enter the Payments Processing Arena 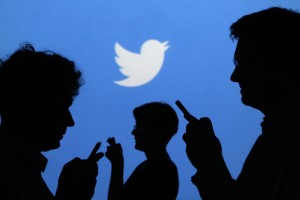 Twitter is actively seeking ways to further monetize its microblogging platform and processing payments may soon be one of those ways.

According to a report by MCD, a Twitter executive disclosed that the social network will begin processing mobile payments sometime in 2015. However, Twitter’s goal is not to create a mobile payment platform, but to allow a new advertising option for movie theaters and concert venues to sell tickets.

Initially the plan is to only sell movie and concert tickets. If successful, it is likely that Twitter will branch out into other categories of products and services that do not require shipping.

The Mobile Revolution is Just Getting Started

A newly released global survey by the Boston Consulting Group found that an average consumer puts an implied value of $6,000 on their smartphone.

The report, which surveyed 7,500 people and 3,500 businesses in the U.S., Germany, South Korean, Brazil, China and India, found that small companies that were “mobile leaders” benefited from 200% greater revenue growth and hired people at a rate 800% faster than “mobile laggards.”

The report also indicated that Americans spend 30% more on wireless than on all furnishings and that those surveyed were willing to give up such things as dining out (70%), a vacation (40%), and sex (38%) in order to afford to keep their smartphones. 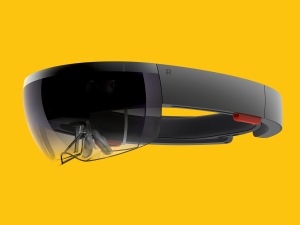 According to chief inventor Alex Kipman, the headset is still just a prototype being developed under the codename Project Baraboo.

In the very near future, technology like this will allow us to compute in the physical world, using voice and gesture to interact with data and layer it with physical objects. Cyberspace will be all around you. Holy the future is here, Batman – this is pretty cool.

Kipman’s prototype amplifies the special powers that Xbox Kinect introduced, using a small fraction of the energy. The depth camera has a field of vision that spans 120 by 120 degrees–far more than the original Kinect. On the right side, buttons allow you to adjust the volume and to control the contrast of the hologram.

Project HoloLens’ key achievement—realistic holograms—works by tricking your brain into seeing light as matter. “Ultimately, you know, you perceive the world because of light,” Kipman explains. “If I could magically turn the debugger on, we’d see photons bouncing throughout this world. Eventually they hit the back of your eyes, and through that, you reason about what the world is. You essentially hallucinate the world, or you see what your mind wants you to see.”

I’ve seen more than one article on this new technology and to a one, all agree that this could be the thing that makes Microsoft “cool” again. I don’t know about you, but this geek is definitely interested to see this in action.

NBC to Live Stream The Super Bowl for Free

NBC Universal will kick off promotion its cord-cutting TV Everywhere plan, which offers free streaming of programming on the network, by streaming this year’s Super Bowl online for free.

Starting at 12 p.m. ET on Feb. 1, NBC will stream 11 continuous hours of programing, including the big game itself, the halftime show featuring Katy Perry, and a post-game airing of its hit show The Blacklist.

Viewers will not have to proof that they pay for the TV service through cable or a telecom to watch the big game. NBC will stream the Super Bowl to desktops and tablets via NBC Sports Live Extra, its live streaming service for sports. The deal doesn’t include phones, though, since Verizon Wireless has the exclusive on that distribution.

I don’t know about you, but I think this is kind of a big deal. I have conversations with friends all the time about interest in and/or the ability to cut the cable cord, and I think this is one move that edges people closer to that. Driven by a network, which is interesting. What do you think?

Being a real time news and information feed is one of Twitter’s greatest strengths, as well as one of its biggest weaknesses.

This past Wednesday, Twitter rolled out a feature that could solve that problem. When users open the Twitter app, they will see a selection of the best tweets that were sent “while you were away,” as the heading notes. The goal is to give users a quick “recap”—the name of the feature—of what they missed.

Twitter will decide what tweets to show you based on a number of factors, such as how many favorites or retweets a particular tweet received.

With the introduction of this new feature known as “Recaps,” Twitter seems to be moving further away from its early view that the home timeline is no longer just a stream of fast moving, unfiltered tweets. This change comes as Twitter continually seeks to become more useful (and relevant) to casual users. 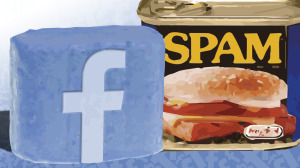 In its latest update, Facebook is again tweaking the Newsfeed, but this time it is focusing on reducing the hoaxes that appear in users’ feeds defined as hoaxes, scams or “deliberately false or misleading stories.”

Now, when users see a false news story, whether it’s a link, photo, or video post, they can report it to Facebook as false or misleading.

According to a recent Facebook blog post, “This works in the same way as reporting a story as spam. “When you click to hide a story you also have the option to report the content.”

If a post is deleted or reported by a large number of users, Facebook’s algorithms will automatically reduce its visibility in the News Feed. While Facebook won’t actually delete these types of posts, it will add a message warning users that the post has been reported as containing false information. Stories intended to be satirical or humorous won’t be affected by the update.

In what I think is a brilliant move, this past Thursday, Tumblr, the Yahoo-owned social networking site unveiled the Creatrs Network, an internal team that works with almost 300 Tumblr bloggers to produce content for paid advertisers. Brands who buy sponsored posts can utilize this new Creatrs Network for images, text, video and other content produce on the site.

“What we’re aspiring to is advertising on the level of art,” David Hayes, head of creative strategies, said at a press conference at Tumblr headquarters. Two years ago, he added, native was en vogue in advertising; last year it was content marketing. “We think this year is about content creation.”

Also being introduced is a broader collective, called Creatrs, which taps users for production for non-profits, media, and arts promotions that are not advertisers.

Content from the new initiative will be distributed via syndication across the web, according to Hayes. He did not say whether Tumblr would receive a percentage of paid work appearing elsewhere. He also said the company was still determining the process for video. Tumblr introduced an autoplay video ad product in October. I am fascinated by this and can’t wait to see how this moves forward.

The world was SHOCKED by the announcement that SkyMall had filed for bankruptcy. Well, the world of frequently travelers, anyway. While there were a ton of awesome jokes about it, no one nailed it as well as Christy Tiegen did with these tweets. 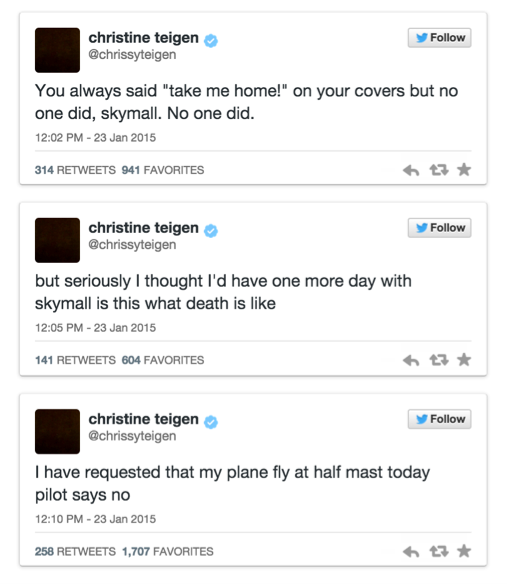 This might have been my favorite thing on the Internets this week. But then, I’ll admit to loving just about anything that Jimmy Fallon does.