Now that we’ve plowed through as much of our kids’ Halloween candy as we can pilfer, it’s time to start thinking about the holidays. How is that even possible?? There’s a ton of interesting stuff going on around the Web this week, let’s see what my team and I have unearthed as the most interesting.

TV Viewers Would Rather Watch Ads Instead of Paying To Stream

When given a choice of watching commercial or paying for an ad free viewing experience, 57% would rather watch ads rather than paying. Funny, I am just the opposite. I love streaming and don’t mind paying at all. But then, I’ve always been a little different. While live TV is still most preferred, streaming has now surpassed the DVR as the second most popular way to get your video fix. Smart TVs and the proliferation of set top streaming devices have contributed to this trend.

Among Millennials, streaming is even more popular. A full 72% of Millennials watch streaming content at least once a week, up from 52% a year ago. No longer just an activity reserved for geeks and techies, streaming is becoming mainstream. This is great news for advertisers, since most streaming video content includes commercials that cannot be skipped.

While routine product placement is already big, the next big huddle is finding a way to make streaming ads more interactive and targeted. 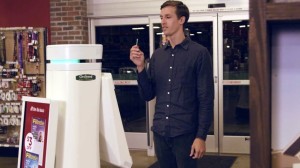 Someday, the helpful hardware man may not be a man at all. This past week, home improvement retailer Lowe’s introduced its first in-store robot called OSHbot. The first public unveiling will be in its San Jose based Orchard Supply Store.

Developed by Fellow Robots in partnership with Lowe’s, OSHbot will be programmed with a map of the store and have an obstacle avoidance system built-in to navigate the store. A 19.5-inch touchscreen on the front and speech recognition will make it possible for the robot to communicate with store associates and customers.

The OSHbot robot clerk will be able to answer questions and help customers locate products throughout the store. According to Lowe’s, the robot will be able to collect real-time inventory stats and data freeing other store personnel to help customers with more complex questions and tasks. Holy moly, is that ever cool. With robot technology evolving at an ever-increasing rate, you can be sure this experiment by Lowe’s is only the beginning of what we’ll see in the years to come.

New Smartphone App Calltag Notifies Your Contact Before You Call Them

Calltag, a new beta Android and iOS smartphone app will notify your contact and let them know why you’re calling before your actually call them. The app allows you to preset a number of tags that serve to let your contact know your call is important instead of letting it go to voicemail. Instead of just calling, you select the appropriate tag and the Calltag app will send it as an iMessage/SMS with your name to the recipient. You then proceed to make the call.

While the idea seems strange at first, I suppose that if it gets people to pick up the phone, especially when it is urgent, it could be huge. All I can think about is the massive number of people who will potentially misuse something like this (read that: sales reps). From a personal standpoint, I’m already terrible about answering the phone. If someone alerts me in advance that they are going to call, I’m not sure how much more effective that’s going to make that process.

A Google-Backed Nanoparticle Project May be Able to Detect Cancer

This past week Google announced an experimental  project that involves embedding nanoparticles in a person’s bloodstream to detect various diseases including cancer.

According to Andrew Conrad, Life Sciences chief at the GoogleX lab, the goal is to develop a system doctors will rely on. The way it would work is the patient would swallow a pill containing the nanoparticles. These would bind to cells in the body in order to scan for abnormalities. A wearable device would collect data from the particles and generate a report.

So far, Google has promised not to use this nanoparticle data for marketing. In fact, according to Conrad, Google does not have any plans to store any data, but will likely license the technology to others to manage.

With the healthcare space exploding, this only makes sense. Sign me up for beta testing this bad boy. What about you? 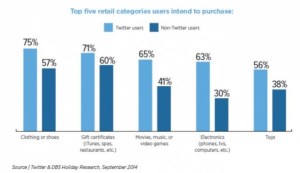 Not only do Twitter user love shopping for gifts, they actually use Twitter to help them. According to the survey, a full 52% of Twitter users said they have seen a product on Twitter that they later purchased. Even more respondents said that Twitter promotions actually motivated them to buy. While many Twitter users will check their streams to learn about products, 54% do so when at a retail store. This has become such a convenient tool for gift shopping that 39% of survey respondents said that Twitter serves as their new holiday shopping list.

I’d love to know your thoughts on this. Twitter was the first social media channel that I truly fell in love with, but my use of Twitter has changed drastically over the years. When I see products that I’m tempted to buy, they are on Facebook. And when I want feedback from friends about products they like that I should consider buying, that is also on Facebook. What about you?