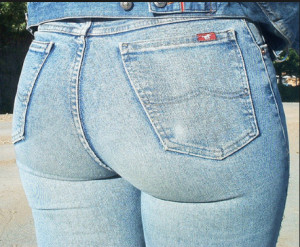 Anyone else marveling at how hard it is to pull your brain back into working after a long holiday weekend? A full week later, I’m finally thinking about work again – just in time for another weekend!

I’m going to lead off this post with the absolute best thing on the Internet, perhaps in the entire year. I’ve watched this more times than I care to count, and laugh like a maniac every single time as I reflect on the many times I’ve done this very thing. Women of the world, what say you? Is it possible to watch this and not die laughing?

And now for some brain candy, here are the things my team and I think you might want to know about.

A recent comScore report shows that smartphones and tablets combined now account for 60 percent of all online traffic, up from 50 percent a year ago. 51 percent of that traffic is driven by mobile apps. Note that this report only includes traffic originating from mobile search.

In its official report, comScore explains:

“While social networking does not rank at the very top of this list among the most mobile-skewing content categories, it is arguably the most important. The #1 category in terms of overall digital engagement accounting for 20% of total digital time spent, social networking now generates more than 70% of its activity on mobile. When considering the category’s contribution to total digital ad spending, its rapid shift to mobile marks an important sign of the times for the Internet economy.”

The report should give you a whole new perspective on the importance of social media marketing for your business, especially on sites like Facebook. 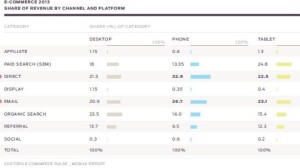 And Speaking of Mobile, The Largest Percentage of Email Marketing Revenue Comes From This Device. . .any guesses?

According to a new Custora report, 26.7% of revenue from email marketing – the largest percentage – was generated via the mobile phone.

Emails opened on a desktop only generated 20.9% of revenue, with tablets generating 23.1%. That should cause some concern for most marketers, since what we see on a daily basis is that the majority have not yet optimized their emails for mobile.

Almost half the traffic to e-commerce sites now comes from mobile devices (phones/tablets), which led to $40 billion in sales last year. In 2014, we’re likely to see $50 billion.

But it’s not quite that simple. Even though visits to e-commerce sites are rising on mobile, sales conversions aren’t increasing at the same pace. And not just a little less – a lot less in comparison to both desktops and tablets.

Respondents to Custora’s survey indicated security concerns with typing in their credit card number while in public on the go among the reasons given.

Custora’s conclusion is that even though mobile is growing steadily, you’re still better off wooing customers via the desktop…at least for now. Another thing to remember is that customers access content you create from multiple devices. So if you send an email, know that chances are good they’ll open it on a mobile device. Your challenge is to make your content so compelling that they’ll come back to whatever it is you tempted them with to complete a transaction or take an action on their desktop, where they feel more secure. Understanding multi-channel has never been more important than it is today.

Your Uncharged Phone Might Not Be Allowed on Some Flights

If you’re a frequent traveler, especially overseas, be aware that the TSA is now requiring phones, laptops and other mobile devices to be charged and able to power up before being permitted through security check points. According to some news reports, this may be in response to increased concerns that such devices could be used in a terrorist attack.

In an official announcement, the agency explained:

“As the traveling public knows, all electronic devices are screened by security officers. During the security examination, officers may also ask that owners power up some devices, including cell phones. Powerless devices will not be permitted onboard the aircraft. The traveler may also undergo additional screening. TSA will continue to adjust security measures to ensure that travelers are guaranteed the highest levels of aviation security conducted as conveniently as possible.”

Since these kinds of security operations can be expanded without notice, be sure the mobile devices you carry with you are fully charged. Otherwise, you could be without your mobile devices and anything stored on those devices. It seems impossible to believe that the TSA would confiscate devices not fully charged, but it’s certainly not worth the risk to test it out. 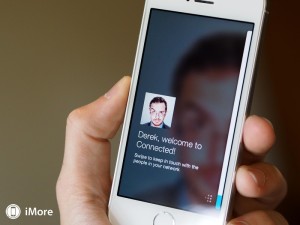 LinkedIn has revamped its existing Contacts app for iPhone with a new focus on keeping you updated on what’s going on with your extended business network. LinkedIn Connected, as its now called, presents those updates in a card format. A simple swipe gesture allows you to browse current updates, including promotions, job changes, and other profile updates. Its designed to encourage more interaction within your business network, and perhaps intended to bring a bit more social back into LinkedIn.

The app is free and available for iOS devices.

Could The FBI Be Jealous of Facebook’s 97% Facial Recognition Accuracy?

According to a recent TechCrunch report, the answer may be YES!

“Given a suspect’s face, NGI [the FBI’s technology] returns a ranked list of 50 possibilities, and only promises an 85 percent chance of returning the suspect’s name in the list. To put it another way, even when you give NGI 50 guesses, it still lets one in seven suspects off the hook.”

“Give Facebook two pictures, and it can tell you with 97 percent accuracy whether they’re the same person, roughly the same accuracy as a human being in the same spot…It also has many more pictures to work with, hosting 250 billion photos to the FBI’s 50 million.”

With the World Cup concluding this Sunday, I thought it would be fun to consider what would happen if we reacted to incidental physical contact in everyday life like they do in soccer games.

If you’re like most people who own a smartphone, taking selfies is part of the fun. But, what if it goes too far? Fortunately there are people who can help.

That’s it for me this week, have a terrific weekend!