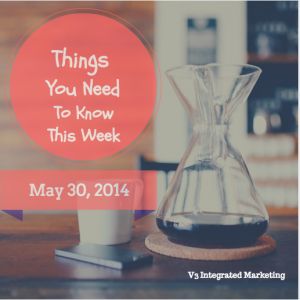 I think that with long weekends in the air, temps in the 80s and kids officially out of school (at least at my house they are) it’s officially summertime. The only problem with that is I am exponentially more easily distracted this time of year than any other. How are you on that front? Now that I’ve gotten that out of the way, let’s get right to it so that I can go goof off. In this edition of Things You Need To Know This Week we have Facebook shaking up the News Feed, Zappos getting social and a Jenga playing cat.

With vacation season just beginning, most people start their vacation planning with a search engine. Which means they’re looking for ideas before they’re looking for savings according to the Great American Vacation Study. 85% of US travelers search for deals online with 65% checking at least three different sites.

Overall value for money far outweighs brand loyalty when it comes to buying vacation travel. Older travelers are more willing to pay a little extra for conveniences such as prime hotel location, but for younger travelers, it’s all about getting the best price. Brand loyalty becomes more significant for wealthier travelers, as they are more likely to participate in a hotel and airline loyalty program. Interesting stuff, isn’t it? We’ve got clients in the travel space, so this kind of information on consumer behavior and preferences is always fascinating to me, and of course, plays a role in the strategies we employ. 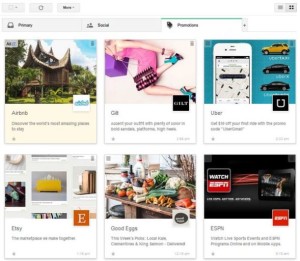 Google is tinkering with Gmail again. This time they’re testing a new gallery layout for the promotional tab. In this experimental grid view, Gmail displays a photo from the email along with a brand logo and subject line of the message. It looks a little like a  combination of Facebook and Pinterest, along with a bit of the new Twitter look.

This will be an interesting challenge for email marketers, as there will be more attention place on images over the test of the subject line. Photos will need to be formatted and cropped to fit the new grid style layout.

The test is in limited beta so time will tell if this becomes a reality. Email marketers, definitely stay tuned on this front.

It looks like Google’s YouTube is finally getting a serious competitor in the online video space, at least if Yahoo has anything to say about it. According to AdAge, Yahoo is preparing to launch a rival video service sometime this summer that will offer more attractive financial benefits to content creators over Google’s dominant online video service YouTube.

Yahoo is expected to offer a more lucrative revenue share arrangement than YouTube, which takes a 45% split. Still to be finalized is the issue of content ownership. An early draft of the proposed terms of service has Yahoo retaining all content ownership rights which is sure to give pause to popular content creators being wooed to sign up. Video creating friends, what do you think about that? I’d love to know.

If You Want To Work At Zappos, You’d Better Get Social

The popular online apparel and show retailer Zappos keeps expanding and expects to hire at least 450 new staff this year, but instead of applying via a traditional job posting, all prospective candidates will need to join a new company social network called Zappos Insiders to be considered.

According to a report in The Wall Street Journal, Zappos Insiders will allow the company to streamline its hiring process by making candidates more accessible. Potential candidates who join the network will be expected to engage with current employees, participate in online Q&A sessions or contests held by recruiters, and demonstrate their passion for working at Zappos. A big part of the recruiters’ mission with Zappos Insiders interactions will be to determine which people will fit its culture. Talk about shaking it up. I think it’s super interesting and can’t wait to see how this plays out – what about you? 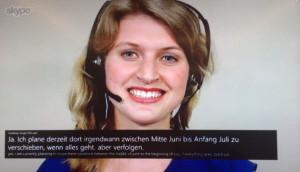 The live demo had Pall’s English being translated, both the audio and captions, to German, as his German colleague’s voice was translated to English. CEO Satya Nadella indicated the new translation feature would be a beta release later this year. Love it.

The growth has been so significant that Instagram actually beat out Twitter in the time spent on the site on the desktop and smartphone apps combined back in early 2013 even though Twitter has a larger user base. Instagram’s lead for time-spend is likely even wider today. I know I spend way more time on Instagram than I do on Twitter – what about you?

Facebook is tweaking the News Feed once again, this time saying just saying no to auto posts and suggesting developers rethink and redesign sharing options accordingly. Specifically, Facebook wants to get rid of the crap posted automatically from an app – the RunKeeper, Spotify, Pinterest-related stuff (implicitly shared content) – from the feed and share stuff that users opt to intentionally share (explicitly shared content). This adds a step to the process, which will lower the number of shares, but it will raise the level of quality shares, and that’s the point. 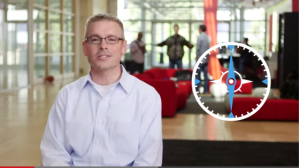 As mentioned earlier with Yahoo fast on their heels planning to launch a competing video service, YouTube has said it will roll out a bunch of new features “in the coming months,” including a separate app for managing channels, a way for fans to pay creators directly, and crowd-sourced captioning.

Matt Glotzbach, the site’s director of creator product management, said the new features were a result of a survey YouTube conducts twice a year to gather feedback from its online stars. No matter what the impetus, a smart move.

Tokyo-based artist Kathleen McDermott was tired of people invading her personal space, so she decided to create the Personal Space Dress, a dress that integrates an ultrasonic sensor to detect when someone is too close. When someone is detected, the dress automatically expands, using a rotating motor. The expansion forces any stranger to step back, thus returning the dress wearer’s personal space. It made me laugh, what do you think?

Misty McPadden, one of my dearest friends and a long time member of the V3 team, is a killer Jenga player. But she may have met her match!

Have a great weekend!! See you on the flip side.