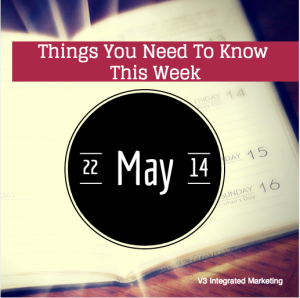 With Memorial Day weekend upon us and the lazy, hazy, crazy days of summer almost here, it’s been another interesting week in the online world. Some of the things we thought you might want to know this week.

It appears Google is creating a service to offer businesses “commercial grade” WiFi at a subsidized price. Business such as restaurants and gyms worldwide will be able to sign on as soon as this summer.

This comes on the heels of Google partnering with Starbucks to provide Wi Fi Internet access to 7,000 locations. This certainly fits with Google’s mission to make the Internet accessible to everyone worldwide. Oh, and it certainly allows for great data collection and usage analysis. I don’t use public WiFi very often and would never use public WiFi to access my email, website or any site that I wouldn’t want hacked. In fact, I avoid using public WiFi like the plague, but if you want it, it’s going to be available for you. When writing this post, we checked with friends who routinely work at local Starbucks and they’ve noted a huge speed improvement. What about you? Are you a public WiFi user? If so, this probably makes you happy.

Getting To Know The New Panda

With the recent rollout of Panda 4.0, Google has shaken things up once again and have website owners scrambling to see how best to react. Google is reevaluating websites and penalizing sites with thin, repetitive content and/or sites that are content aggregators deemed to not deliver much value. Searchmetrics did an analysis of the sites affected and looked at “organic SEO visibility for each domain for all researched keywords.” Many popular sites took a huge hit in terms of traffic and some of the hardest hit were some big guys – like Ask.com, Examiner.com, both down 50%, eBay, Retailmenot, Biography.com and History.com, all down 33%, and celebrity sites StarPulse.com (down 50%) and AceShowBiz.com (down 75%). It’s a sure bet there’s lots of hair pulling going on around conference tables and much scrambling to figure out how to deal with these steep drops as a result.

Some of the biggest winners in the Panda race, (also according to Searchmetrics’ data), were Zimbio.com, eMedicineHealth.com and MedTerms.com, all showing a 500% increase in traffic, MyRecipes.com, CouponCabin.com and ShopStyle.com, all up 250%, and GlassDoor.com and ConsumerAffairs.com, both up 100%. BuzzFeed continues its upward climb, with ridiculous headlines and “viral” content that appears to be working (heaven help us all), with a traffic increase of 25%.

The real story here is Google’s relentless mission to reward sites that offer high quality, original content and penalizing sites that specialize in syndicating and aggregating content from other sources. Note to everyone – this is important to pay attention to. 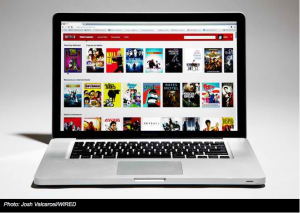 I probably don’t have to tell you that TV (and entertainment content in general) is evolving – and I loved reading about what Neil Hunt, Netflix’s chief product officer, has to say about the future of consumption of online content. “Netflix will know exactly what you want to watch, even before you do. You won’t have to spend all that time browsing through endless lists of shows on your television.”

Instead of choosing from a grid of programs and networks, advances in personalization technology will instead provide a handful of finely tuned suggestions that fit perfectly with what you want to watch at that moment.

This personalization will make it possible for shows with small but devoted audiences get traction not possible otherwise. The much more efficient economics of Internet-delivered television will free content creators from the limitations of old media. Shows can tackle more fringe topics and can be any length. This is music to my ears because less spent time finding shows that I like is exactly what I’m interested in. And I really think this is going to be happening a lot sooner than ten years from now – what do you think? Does this creep you out or does the thought of automation and intuitive devices in our homes (TV and Internet aren’t the only advances on this front) make you as happy as it does me?

For advertisers, this is where we might see the death of the traditional 30-second commercial, in favor of more targeted advertising based on individual viewer’s interests and real-time viewing habits. This means maybe seeing a commercial for diapers if you’re expecting a baby or an ad for Ford if you’re shopping for a new car.

By 2025, the vast majority of consumers will own a smart, Internet connected television, which will have companies like Google, Apple and Netflix racing to become the leader in the new age of Internet-delivered content.

LinkedIn recently announced its adding a new feature to the “Who’s Viewed Your Profile” section that indicates how your profile ranks as compared to others at your company, as well as to all your connections. Your rank is based on the number of times your profile has been viewed during the previous 30 days. LinkedIn will also offer you suggestions ways to increase profile views such as joining certain groups and adding certain skills to your profile. No need to worry about potential recruiters seeing your ranking, as only first degree connections will be able to view where you stand.

LinkedIn is flat out brilliant when it comes to coming up with reasons to get people to its site and using the platform. They always have been, and there’s a reason that LinkedIn has long been one of the most profitable social networks. Their “Who’s Viewed Your Profile” has long been their crack cocaine, and the number one reason people visit LinkedIn. They want to see who’s checking them out. This new change just fuels that and gives people even more incentive to get over to LinkedIn and use it. Plus, all the online chatter about this on LinkedIn and other social nets only gives LinkedIn tons more exposure. Seriously. Brilliant.

Facebook has long been the target of privacy advocates for their seemingly unending “adjustments” to its default setting. Now when new users post their first update, the default privacy setting will be “friends” instead of “public.” According to Facebook, “We recognize that it is much worse for someone to accidentally share with everyone when they actually meant to share just with friends, compared with the reverse.”

Once you select your default privacy setting, it will remain for each successive post unless you change it. Facebook is also launching a new feature to make it easy for users to perform a “privacy check-up” to make sure their settings are what they want and expect. Probably a smart move. People don’t trust Facebook when it comes to privacy and privacy settings – which is smart in general. The more they can do to change that perception (which they have very much earned), the better, as privacy concerns continue to be among the largest issues for users of the Internet in general and of social media networks in particular. 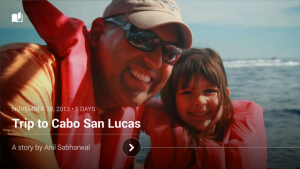 Google+ has always been recognized as an awesome platform for rich media – especially photos and video. Google+ Stories, is rolling out to users starting this week, which offers the ability to select your best vacation pictures and organize them into a visual online scrapbook. These “Stories” will be created automatically when you return from vacation from photos you upload to your Google+ account. The experience will be available on mobile as well as the web. Android users will get Google Stories first with an iOS version coming soon. Not sure how I feel about this, but it’ll be interesting to check out. Obviously, The Goog wants us to upload our vacation photos to Google+. People do that on Facebook all the time, so it totally makes sense. What bothers me about this is people not intending their photos to be accessed (and potentially swiped and used without their permission) might upload without realizing the dangers. However, those same dangers exist for people uploading photos on Facebook without nailing down their privacy settings. It’s complicated, people! And people steal images from others and use them all the time. Ask my friend Danielle Smith, who keeps finding her family photos used in advertisements all the time.

Pinterest is getting more business friendly by opening up a business insights API  to allow third party developers to access how pins are performing across the Pinterest network. This will be of particular interest to brands, because you’ll now be able to gain insights as to which products are most popular among Pinterest users and which pins are driving the most traffic and sales via various social media measurement tools they use. Sweeeeeet.

According to Chip Bergh, CEO of Levis Strauss, your jeans aren’t meant for the washing machine. Speaking at Fortune’s Brainstorm Green Conference this past week in California, Bergh admitted he hasn’t washed his jeans in over a year. I wear my jeans many times without washing them, what about you? But I can honestly say that I never go a year!!!

Check out his comments in the video below:

Demon Cat Not A Disney Fan

Apparently cats aren’t fans of the hit song “Let It Go” from Disney’ hit animated film Frozen or at least one cat as seen in this video. I can’t stand that damn song anymore, either, so I feel his pain.

The absolute best thing on the Internet this week was Jimmy Kimmel’s Celebrities Read Mean Tweets. I am not sure when I have laughed harder, nor can I decide which is my favorite.

I’ll leave you with the second best, and absolute most heart-warming thing I’ve seen this week. A group of beagles that had spent their whole lives in cages, being used in labs for product testing, were rescued and set free. The moment they are taken out of their cages and get to experience the feel of grass under their feet and romp and cavort with the other dogs – well, if it doesn’t make you cry like a big old baby, I’m not sure what will. I love dogs. They are just so amazing in every way.

And with that I bid you adieu. Have a terrific holiday weekend and know that I’ll be toasting you and drinking cold beer, cooking out and trying not to strangle my children. Oh wait, that just slipped out. See you next week!