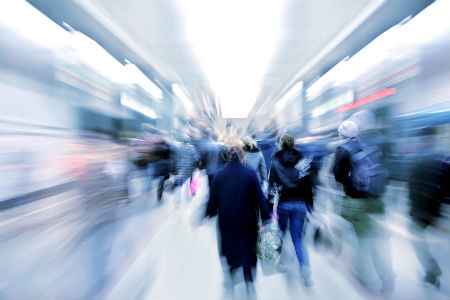 A business as usual strategy isn’t going to be enough to reach a consumer market that Millennials are changing beyond all recognition.  And surely you won’t be surprised to learn that Millennial buying behavior is heavily influenced by the social media activity of their friends. According to a recent study by Harris Interactive for The Webby Awards, Millennials are not only more likely to take notice of products (or services) their friends are posting about, but they’re also the ones who are most often the first to try out new products and services.

The study questioned 2018 U.S. adults, across all age demographics in January 2014, to find out more about their early adoption and sharing habits. The results reveal some interesting differences between the motivations of different age groups to try out new products and services, to share their opinions on social and to take notice of other people’s experiences. Here’s a snapshot of the results as reported by eMarketer.

When it comes to which age group are amongst the first of family and friends to try out the new stuff, the Millennial group (18-34) come out top with 57% saying they tend to be early adopters. Compare that with just 25% of over 55 demographic and 19% over 65, and you can soon see the power of Millennials to not only find, but to potentially try your product. 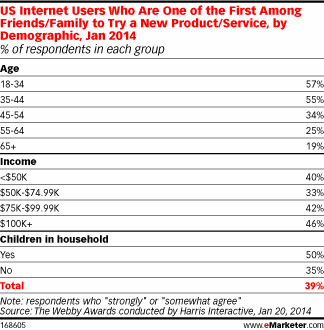 It’s not just trying out a new product that’s important of course; it’s what the user does to share his or her opinions, good and bad, that could potentially have the most influence. It’s interesting to look at the data below. At first blush, the relatively low numbers of folks who responded they always, often or sometimes share thoughts online seem unimpressive. Until, of course, you add up those numbers. If 39% of all Millennial males either always, often or sometimes share their impressions of your product or service online, that’s a lot! As is 50% of Millennial women. Then you’ve got the Gen Xers right behind them, with numbers that are almost neck and neck. That’s a lot of online feedback about products or services shared in the social media space. 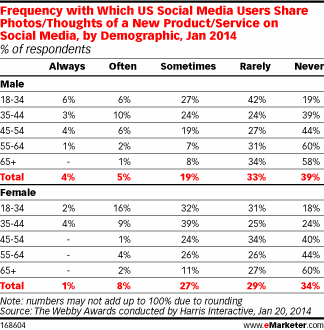 So, we know that the Millennials are the most likely to be early adopters and to share their thoughts on the social networks. But does that matter? Does anyone take pay attention to that online chatter? Well the answer to that looks like a resounding yes. According to the results of the study, Millennials are significantly more likely than older generations to be influenced by their friends’ social media postings about services and products. 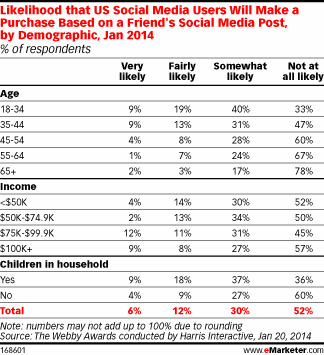 Two thirds of the 18-34 age group indicated that they were at least somewhat likely to make a purchase after seeing a post on social media from a friend. This percentage declines sharply to just over a half in the over 35s, down to two thirds over 55 and only one in five for the over 65s. And notice how those folks with children in the household are even more influenced by feedback shared by friends? I think that’s pretty fascinating, especially as we see the Millennial generation now beginning to have babies.

If this survey is representative of the population as a whole (and I’m pretty confident that it does), it means that the Millennial generation likes to try out new products, share their experiences online and listen to their peers more than any generation than has gone before. Marketers and brands, ignore Millennials at your own risk.