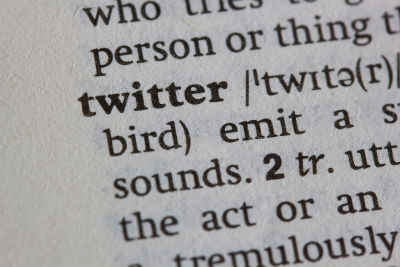 People like to tell stories through photos. That’s part of the reason sites like Instagram and Facebook are so popular with the masses. Humans in general, and the socially connected in particular, love capturing special moments of life and sharing them with family, friends and pretty much with anyone who will look. Twitter is no doubt keenly aware of the power of imagery, especially as Facebook-owned Instagram steamrolls it in user with 200 million active users in pretty much the blink of an eye.

Although not originally conceived as an image-centric site, images are clearly what the people want, so Twitter’s rollout of new photo sharing features for mobile, only makes sense.These new features are currently available on iOS and Android.

Why all the focus on visual content? Well the popularity of sites like Instagram, Pinterest and even Facebook are testament to the allure of imagery. And for marketers, it shouldn’t be news that rich media as part of your content marketing mix is important. And there’s a reason for that. As consumers of content, we tend to engage more with visual content than we do with text based posts. According to data from MediaBistro, visual data is processed some 60,000 times faster by your brain than text. When it comes to learning, 65% of people learn more rapidly when using visual data. That would be why we’ve seen the huge use of infographics in recent years, as marketers morph toward presenting data in formats that make it easy to consume.

With Twitter’s new photo sharing functionality, you can now upload a series of up to four images in a single post. Simply tap on the preview image for an overview of all the images or flick through each image one by one. The series will appear as collage in your stream when viewed from the web and will also appear in embedded tweets. Expect brands to be experimenting with this new feature to promote products and it’s a sure bet that media outlets will make use of this well, as a way to add more visual features to their news stories. You can see what it looks like here.

Is There a Small Business Application?

There’s also an application here for small businesses, but of course it won’t be of much value to anyone who’s not yet invested in building a relevant, targeted follower base. But think for a minute about how a restaurant might use this photo sharing feature to promote daily specials. Or a local boutique might use this to highlight featured sales of the week. For event producers (large or small), this might be a great way to showcase what’s happening at an event in real time. The possibilities are endless, but of course all will take some thought and some planning, and you’ll have to spend the time needed to build an audience if you want anyone to see any of this great visual content you’re sharing.

According to Twitter, the primary reason for implementing these new features is to make photos more social, but let’s be honest — it’s an attempt to keep up with the competition and stay relevant among users. The system will allow users to tag up to ten people without counting against the 140 character limit per tweet. That’s interesting. Think again about an event using multi-photo sharing to promote what’s happening at an event or imagine a group of friends having lunch at a restaurant and snapping a group pic, tagging everyone in the photo (including the brand) and having it be shared across each of their profiles. You know, kind of like you can already do on Instagram by using an app to stitch several photos together, then upload it and tag a bunch of people.

Just as with both Facebook and Instagram, if you’re tagged in a photo you’ll receive a notification. Yay! More notifications. Oh wait, that just slipped out. If someone having the ability to tag you in a Twitter photo makes you nervous, you’re not alone. If you either don’t want to be tagged at all and/or if you want to control who can tag you in a photo post, you can adjust your preferences by adjusting your security and privacy settings tab either on Twitter via the web or through the settings on your device. 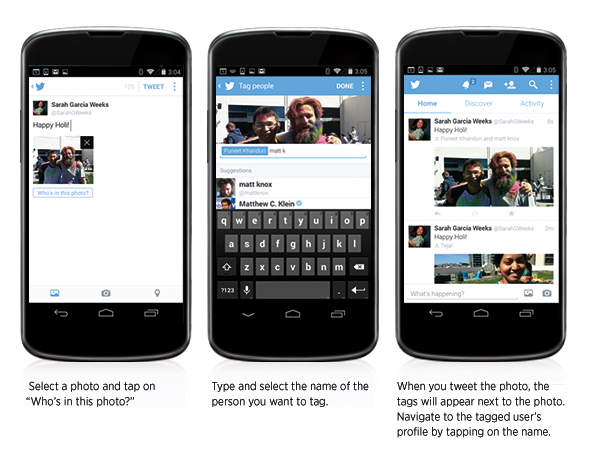 It’ll be interesting to see how this plays out. I’d guess it will be fairly easy for spammers to abuse this feature by tagging people who aren’t in photos at all and I’ll bet we see spammers jumping on that in no time. Or people will decide they’re not interested in being tagged and just shut off that functionality altogether. There’s also the issue of brands tagging people without their permission and opening that can of worms. And of course, there’s the annoying issue of being tagged in photos that aren’t your favorite shots of yourself – never anyone’s favorite thing.

Overall, it’s not a surprising move on Twitter’s part. Like anything, and especially any social network, Twitter has to change in order to stay relevant and attract a user base that makes it attractive to advertisers. And maybe it’s also a move to make the platform even more attractive to Millennials. It’s definitely a move to combat the visual appeal that Instagram and Facebook already hold for users and advertisers.

It will be fun to see how brands capitalize on this and I’m looking forward to that. It will also be interesting to see how the user base adapts and incorporates this into what they share as well. Let’s hope it’s not limited to selfies quadrupled. As with anything else, time will tell. What do you think? Have you tried the new photo sharing features? What upsides do you see, for brands or for businesses? Are you a skeptic like me and see the potential for spammers to have a heyday? I’d love to hear it.

As an aside, I really enjoyed Maarten Albarda’s post, Instagram Now Bigger Than Twitter on Mobile And Why That Doesn’t Matter ( in today’s MediaPost. His point? Quit worrying about which platform is bigger and pay more attention to where your audience hangs out and what you want them to do. He’s right. But when it comes to making money from advertising, which all of these platforms want to do, size does matter.

V3 – How Millennials are Changing the Face of Consumer Marketing
The Next Web – Twitter is Experimenting With Replacing Its Sacred Retweet With a “Share” Button
Silicon Beat – Twitter Boosts Photo Sharing, Teases at Redesign, Seeks Music Relaunch