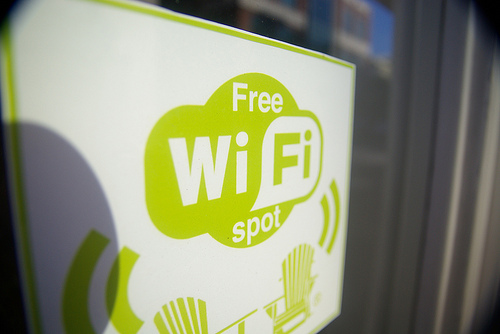 With some 198 million Facebook users primarily using their smartphones to access their Facebook account,  it’s not especially surprising that Facebook is venturing into the wifi internet hotspot and wearable technology businesses. Facebook’s now at 1.19 billion active users worldwide. And, as more and more people use mobile devices to navigate the web and and post content on social media platforms, Facebook’s ever on the lookout to embed the social media network even more deeply into their daily lives. Smart move, at least for them. Let’s talk about what they’re doing with Wifi.

Free Wifi Connection In Exchange For A Facebook Check In

Erik Tseng, Facebook product manager is leading an effort to make it easy for the public to access wifi hotspots when they visit partner establishments. Tseng positions this is a win-win for both merchant partners and customers. How does it work? When customers visit a store, they can connect to wifi for free as long as they also check in using their Facebook account. This offers participating merchants better visibility into who their customers are and customers with free Internet access on the go. Facebook has partnered with Cisco to make this possible.

The obvious question: will people be willing to give up their location, information, and be served with ads in exchange for free wifi access? And do they really need wifi access when they’re at their neighborhood Target store or the local shopping mall? Will customers feel secure logging into a public wifi hotspot using their Facebook account? I know I wouldn’t, but what do I know. As this rolls out, I’m sure we’ll see benefits and incentives offered to consumers, like rewards and specials for checking into specific venues because that’s data that merchants want. Foursquare already does this, but based on many conversations I’ve had with online friends, Foursquare isn’t really on the radar screen of the masses. But Facebook checkins? We see them growing at a rapid pace. Whether or not consumers are in the market for free WiFi, I would guess that if they’re already checking in, that they’ll definitely do so in exchange for offers and rewards. Obviously, there are lots of questions and since only a few stores offer this as a free service, it’s way too early to tell. According to Cisco, “in May they collaborated with Facebook to offer the solution to Bay Area based Philz Coffee.  And today, Bloomin’ Brands Bonefish Grill is testing the solution in two of its restaurant locations in the U.S”.

Wearable Technology To Connect With Friends

In recent years, wearable technology has become much more integrated into people’s lives. Health and fitness applications have led the way. The Nike FuelBand and Jawbone’s UP activity tracking bracelet have demonstrated the potential of wearables to provide useful, real time health data to the user.

As mentioned earlier, Facebook is also venturing into wearable technology. Recently, they hosted a special hackathon event focusing on creating useful applications of wearable technology. Invited developers came up with several interesting ideas including package delivery tracking, an interactive electronic pet similar to the popular Tamagotchi children’s toy and an app that helps people make digital connections through a simple handshake. Speaking only for myself, I can totally see the appeal of health and fitness wearables, but I’m not at all interested in tracking my packages or using a wearable to make digital connections. And I sure don’t need my kids using a wearable powered by Facebook that’s a virtual pet that they don’t need. Facebook, I don’t trust you with my kids. No way, no how.

According to Facebook’s Tseng, it’s still early days for wearable technology. “The majority of the world, we’re still waiting for that one thing that makes this truly useful. None of us truly knows what that is yet. There’s a huge opportunity for developers to experiment and iterate…there’s no leader, everyone’s at a level playing field.”

Tseng said Facebook is exploring this space and actively working with developers and multiple platforms and providers to research and create useful applications of wearable technology. In the words of Facebook, “stay tuned.”

It’s Really All About the Data – Your Data

Wearable technology has made huge strides in just the past couple of years and consumers seem to have an insatiable appetite for connectivity at all times. Although how you don’t already have that with your phone, I’m not sure. In any event, Facebook has taken notice and it makes sense that they’re exploring wearable tech and location-based check-ins and reward systems, potentially powered by the carrot of free WiFi. What they really want is that data that you’re willing to give them.

And with competitors like FourSquare successfully forging similar strategic partnerships for years, Facebook knows they need to do the same. It makes sense for them to partner with established brick and mortar business to provide easier and more seamless ways to connect to the Internet while on the go, especially on mobile platforms. Facebook’s goal is clear: get people on the site, keep them on the site, give them a reason to give up their data so that Facebook can leverage it and make money. Never forget that when it’s free, people, you’re the product. And I can’t fault Facebook in any way for that – their business is about their bottom line. And that’s as it should be.

And for consumers, maybe it’s a win for them, too. If they’re in the market for free wifi Internet access on the go and/or if they’re early adopters and into the whole wearable technology thing and if Facebook comes up with an application for that that serves a need for consumers, it could work.

What’s your take? Will you be willing to check into Facebook in order to get special offers and rewards when you’re shopping. Sure you are. What about a need for WiFi access on the go – do you need that? I’m still scratching my head over that one. What about wearable technology powered by Facebook? Cool or creepy?