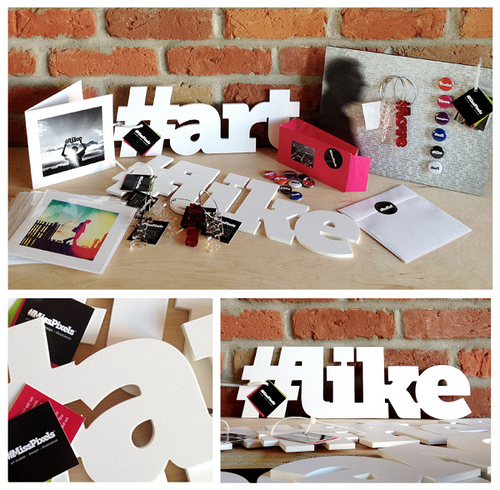 Facebook announced this past summer the rollout of clickable hashtags, but I think that for the most part, people weren’t paying attention. I think that’s interesting.   Using hashtags is really almost instinctual for savvy web users. In its most simple form, hashtags are an easy-to-implement, easy-to-use filing and organizing system. And for brands, I suppose hashtags are but one more data point that could lead to valuable insights. Let’s back up for a minute, though.

The history of hashtags is actually kind of fascinating. Created by Chris Messina, a hashtag was conceived as a way to identify groups, and quickly morphed into a way of organizing and identifying content. Hashtags were quickly adopted by Twitter users en masse and have become a standard across the Web. [On the off chance you don’t know what a hashtag is, it’s a “tag” created by putting a # sign in front of something that you want to be searchable. For instance, if you want to identify a piece of content you’re sharing as specific to B2B marketing, you might use a hashtag like, “#b2b].” Hashtags enable users to search by keywords as well as to follow current events, groups and even industries. In an attempt to emulate Twitter, Facebook hashtags rolled out in about June of 2013, but it wasn’t something that many users paid attention to. I also believe that many users didn’t (and likely still don’t in many instances) understand the value of hashtags and/or know how to use them in a way that might deliver any real benefit.

A few months after Facebook rolled out the hashtags, most publications and bloggers following this issue opined that Facebook hashtags were a massive failure. I especially liked David Carrillo’s post, “Why Facebook hashtags were doomed to “fail,” which talked about not only the Facebook newsfeed and how hashtags don’t make sense in a newsfeed algorithm, but also the fact that hashtags work better for discovery than for personal connectivity. Read his post, it’s terrific.

Here’s the thing. Facebook’s goal is to keep people on the site as much as possible. And serving up results when people are looking for information helps them do that. For users, being able to search hashtags might deliver valuable information. And since Facebook doesn’t let you see the updates of all your friends in the newsfeed (which annoys pretty much everyone on the planet), this could be an interesting way to get information.
Call me crazy, but I think that using hashtags (the right way, as a data organization tool), makes sense. Here’s why.

I see friends posting status updates all the time asking for things like,

“Hey friends, I need a plumber, who do you guys recommend?” or

“I have a twin bed for sale, let me know if you know anyone interested.”

I don’t know about you, but all my Facebook friends are absolutely, positively not in the same city, so when I see updates like that I often wonder why people don’t slip a descriptor in there, just on the off chance it might be useful. Like if you really wanted to get rid of your extra twin bed, why wouldn’t it make sense to tell people the general area in which you’re located?  I’ll admit, I’m kind of nerdy, but when I post things relative to the city where I live, I always post something worded like this:

and with the introduction of hashtags some time ago, that changed the way I posted things, and today those updates look like this:

“#KC friends, I need a great dermatologist, who do you know?”

An additional reason to consider the use of hashtags is because, as well all know, Facebook doesn’t let you see the updates of all your friends. So people could be posting about a myriad of things in your city, people you’re connected to and/or stuff you might want to know about and you could well not be seeing their updates.

I think it’s too early to call Facebook’s hashtags a total failure. I think when they first rolled out, it was likely that the masses really didn’t (and still don’t) understand the value of hashtags and/or how to use them effectively. And I think that the brands who used them used them in a spammy, advertising-ish way in campaigns and such, so they were largely ignored by users.

Moving forward, Facebook’s focus is going to be hyper-focused on local markets and when you are doing something that you want people to be able to find out about, it only makes sense to do all you can to optimize your content so that they can. And hashtags? That’s an optimization tactic. To give you some examples as to how hashtags can be valuable moving forward, say you want to know who is posting about an event that’s happening. Here are some examples that I found tonight as I was writing this post

Randomly searching the term “Phoenix” to see what’s happening there that people are hashtagging: 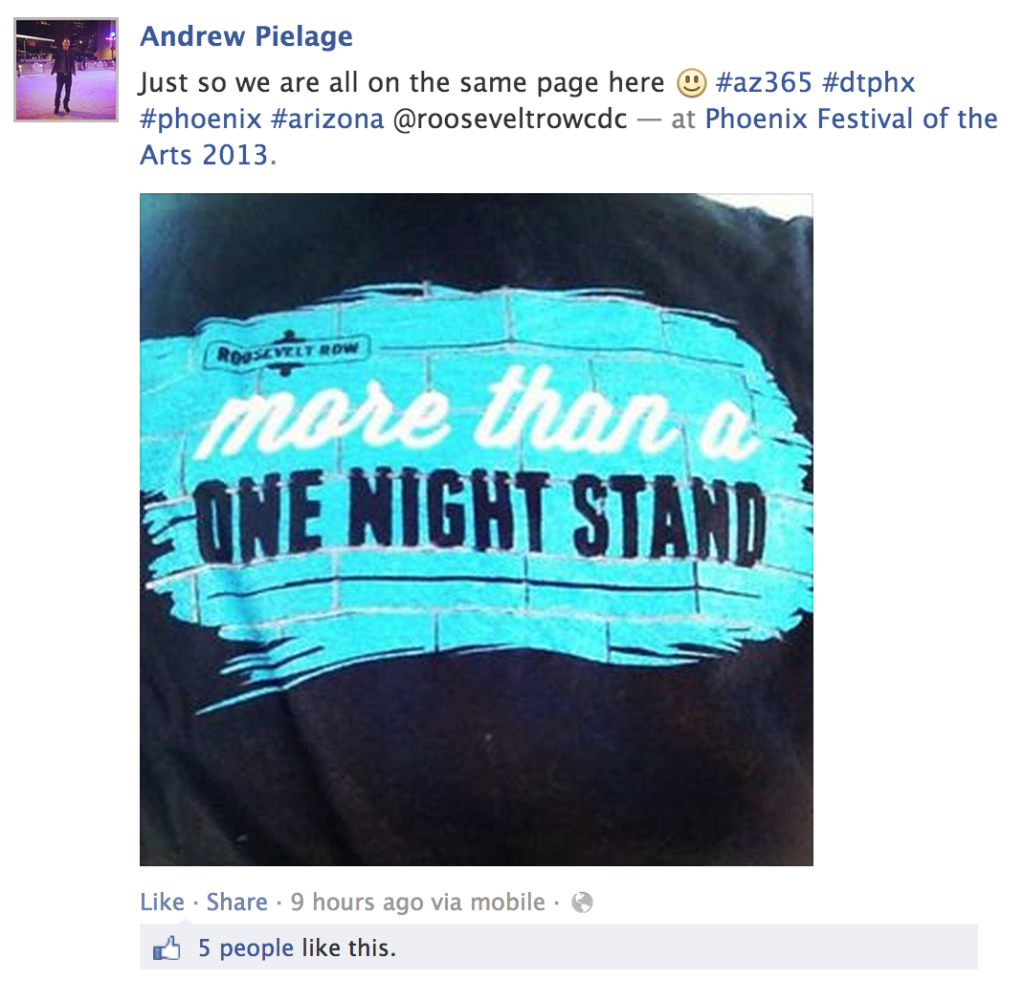 Consider my search for #kc #realtors and the information that came up as a result in search. 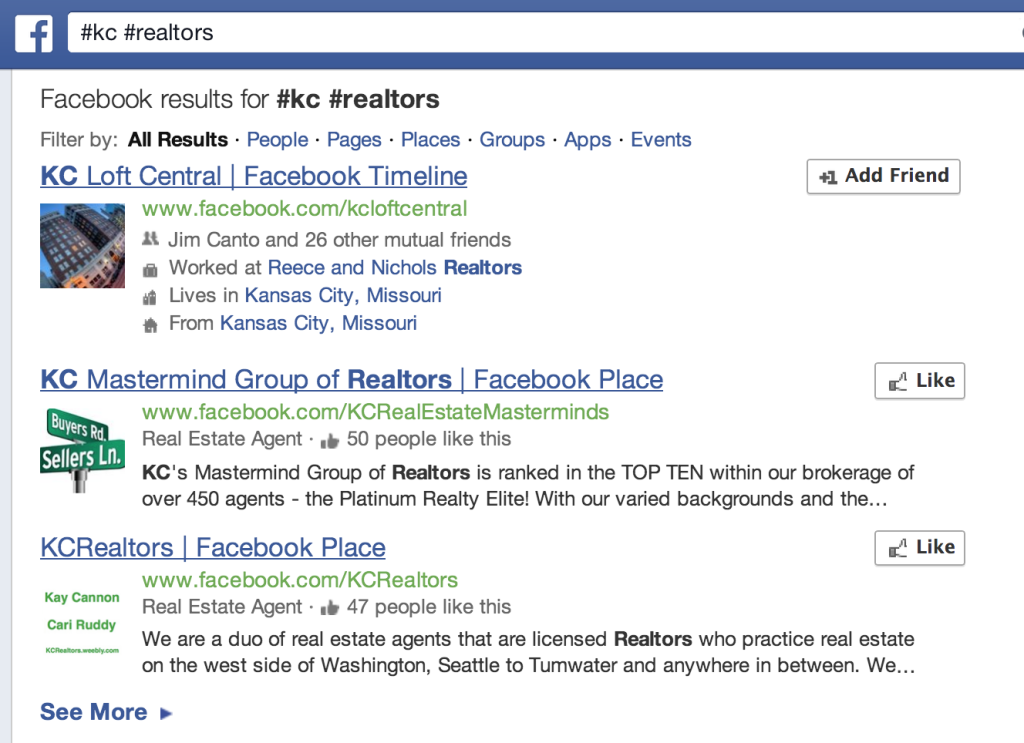 Valuable? Let me ask you this: if you are a realtor, in Kansas City or in any other market, when someone is randomly searching Facebook for realtors in your area, do you think there’s value in showing up in that search result? If so, perhaps it’s time for you to start experimenting with hashtags in your content and in your About description and so forth. Don’t go crazy, just use them as they make sense. They test it by searching for the hashtags you’ve used and see what happens. Ask your friends to do the same. See what happens. Maybe it’s worthwhile, maybe not, but you won’t know unless you give it a shot.

Even more interesting, as I kept hitting the refresh button, Facebook served up different trending data on every occasion, with no ability for me to dive deeper into trends and see if there was something in particular I wanted to look for. I thought that was actually pretty lame, and really, more than a little annoying.

But what I did see, in general, was a whole bunch of talk about football and, oh, wait, apparently the #survivorfinale is on tonight. If you don’t want a spoiler, skip the image below, but here’s the talk that’s happening online and, more specifically, on Facebook, about the Survivor Finale. 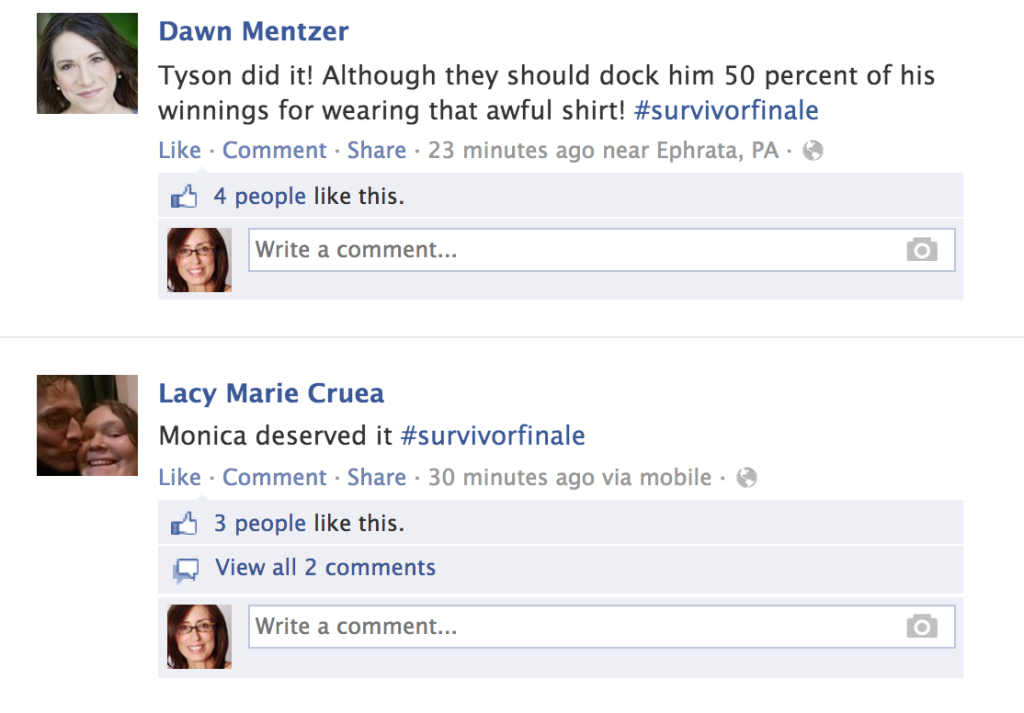 Hashtags and Their Value for Brands

Okay, so I gave you small examples above. Let’s consider Target’s #MyKindofHoliday campaign, designed for Pinterest and Facebook. People (many of whom are bloggers) are posting content and using the hashtag – on Facebook, on Twitter (cross posting on Facebook) and on Instagram (also cross-posting on Facebook. In addition, Target is posting (across multiple branded pages) also using the #MyKindofHoliday hashtag. Think about that for a minute. Target is no doubt also buying media (and Facebook ads) to support the #MyKindofHoliday campaign, but look at the traction the use of the hashtag is generating as well. And the searchability. Consider the value of that for the brand. If this piques your interest, and scroll through the feed for a quick minute or two. 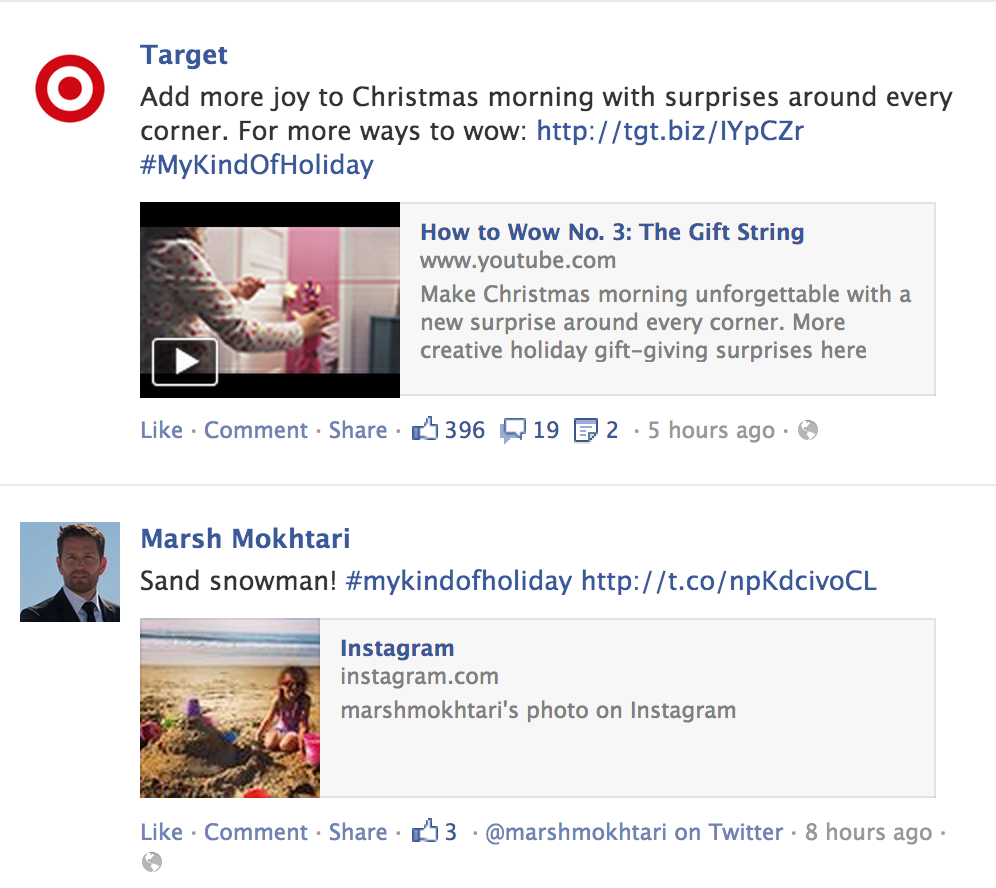 Other brands are also experimenting with hashtags in their marketing efforts and there are plenty of opinions and even some research out there that says that hashtags and Facebook just don’t work. In fact, see the Social Media Examiner research linked below for more information on that. I’m not sure what I think just yet, but maybe what I think is that it’s too early to tell.

What do you think? Are you more likely after seeing some of the examples above to think that Facebook hashtags might at some point prove valuable or are they a massive waste of time? From what I see in my newsfeed, most people don’t use hashtags on their content, unless they are cross posting from another platform (which is lame anyway).

What about you? Are you using hashtags? Do you pay any attention when people (or brands do). Do you see the value in that moving forward or do you think I’m smoking the crazy pipe?.