I’ve been waiting for Feedolu, a RSS feed reader that will blow your mind, for months and it’s now open for public beta. Feedolu uses advanced feed reading technology and combines that with social features commonly used on sites like Facebook, Twitter and Pinterest.

Not only is it a fantastic interface, designed by my friends at Dashal, Feedolu is completely free to use. You so totally want to know more, don’t you? 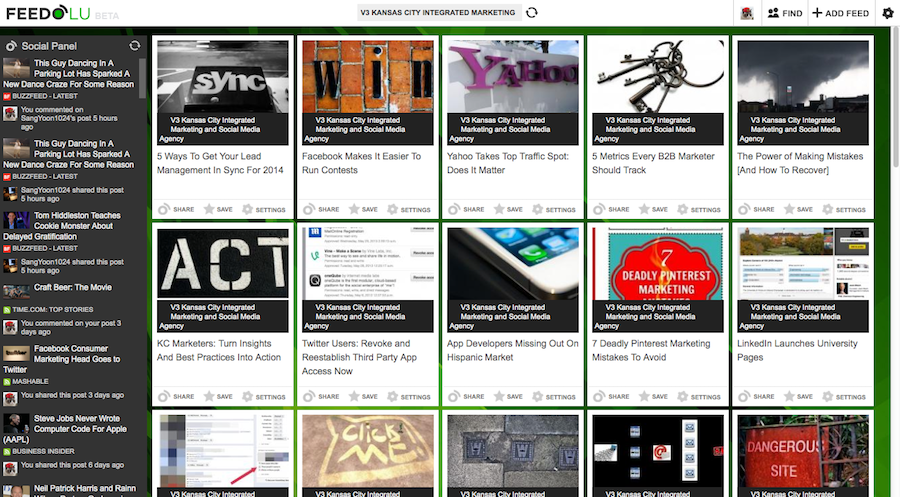 Feedolu users will have a public profile with their own URL (feedolu.com/username). You can customize your background, create a bio and attach a link to a website (like Twitter) and website RSS feed as well. When a user attaches an RSS feed to their profile, other users can then go and subscribe to that RSS feed, giving that user the opportunity of increased website traffic via subscriptions. Ummmm, hello sweetness.

Feedolu lets you follow and be followed by other Feedolu users. When you follow another user, you’re able to view items they’ve shared or commented on in a real-time social panel.

It just keeps getting better. Each time you share a post on Feedolu, it creates a new page that can not only be commented on by other Feedolu users, but it’s also a searchable page.

Everything that’s always limited you before has been something the design team at Dashal has paid attention to—like annoying feed restrictions. With Feedolu, there are zero restrictions to the amount of feeds you can subscribe to or feed walls you can create.

Feedolu processes your feeds 24 / 7 whether you are on the site or not, allowing you to never miss content. It also allows you to view up to thousands of feeds at the same time, since they store feed content in their database–and that means you don’t have to go from feed to feed. My head is already swimming and we’ve only begun using Feedolu.

Feedolu not only acts as a powerful, easy to use RSS feed-reading platform designed for both the occasional and powerful user, it allows users to share and engage with other users, and for website owners and companies to have a new tool in driving traffic to their content and websites.

Here’s a video that’ll show you more about Feedolu, so check it out:

Bottom line? Run, don’t walk, to sign up for the BETA and try Feedolu out. It is really an incredible tool and I’m thinking you’re going to like it as much as we do—and it’s only in the early stages of development, with additional improvements still in the works.