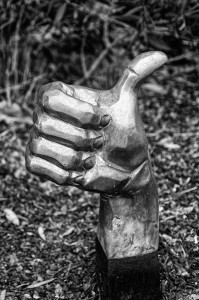 Far from being an innocuous thumbs-up, Facebook likes are starting to carry more weight, signaling everything from purchase intent to insights into your personality. The latest development? A U.S. court of appeals recently ruled that Facebook likes are protected as free speech under the Constitution.

The case stemmed from an incident in 2009 during which six employees at the Hampton Sheriff’s Office in Virginia lost their jobs after they expressed support for the opponent in an upcoming election for sheriff. The support included liking and commenting on content posted on the opponent’s Facebook page.

Instead, Judge Traxler ruled that liking something on Facebook is the “Internet equivalent of displaying a political sign in one’s front yard,” which has already been ruled by the Supreme Court as protected speech.

I’m not terribly surprised by the decision—after all, it makes perfect sense, especially when you factor in the comparison to political yard signs. What’s more interesting to me is that content shared on social networks is starting to have greater legal ramifications.

Consider, for example, a number of recent legal decisions involving Twitter. Across the pond, a court ruling allows legal action against potentially libelous tweets in England and Wales. It’s a civil offense, meaning you can’t be jailed, but you can be given a hefty bill for damages. What’s more? Retweets are applicable, too.

And just last week, a New York woman sued former FDNY Emergency Medical Service Lt. Timothy Dluhos after he posted a photo on Twitter of her in a wheelchair with the caption “Wide Load.” The FDNY is also named as a defendant in the suit.

The moral of the story? Think twice about what you post on social media networks, whether on behalf of yourself or your clients. Although court rulings including the Facebook likes verdict tend to favor social media users, others can pave the way for severe penalties depending on the situation and context. When all else fails, try a little common sense—although judging by some of the things I see online every day, that seems to be in short supply!

What’s your take on Facebook likes being classified as free speech? And when looking at the larger issue, do the increasing number of social media-related lawsuits make you think twice about the content you share?