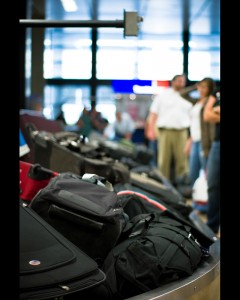 You’ve probably heard about Hasan Syed’s purchase of a promoted tweet to blast his frustration to British Airways’ 302,000 Twitter followers. And while that in itself is an interesting story, we see a bigger issue: the increasing imperativeness of a proactive, responsive online customer service strategy.

If you’ve been hiding under a rock the last few days, here’s a quick recap. Hasan became increasingly frustrated at how British Airways handled (or, rather, didn’t handle) his father’s missing luggage. His solution? He bought a promoted tweet (the cost hasn’t been disclosed): 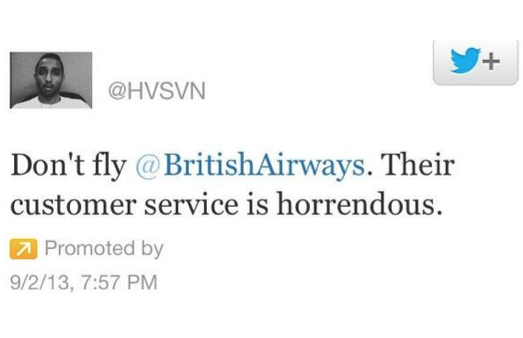 Not only was the promoted tweet much more visible in the Twitter stream—it was quickly covered by a number of media outlets, too. The kicker? It still took British Airways another 10 hours to respond, which they did with a none too apologetic tweet: “Sorry for the delay in responding, our twitter feed is open 09:00-17:00 GMT. Please DM [direct message] your baggage ref and we’ll look into this.”

The Bigger Lesson: Why Social Customer Service Is Imperative

The fact that Hasan turned to a promoted tweet is an interesting case study. Yet what’s even more important is what this incident says about the importance of a strong customer service policy, especially one that’s focused on online channels.

Today’s consumers are more empowered than ever before. Social networks like Facebook, Twitter, YouTube and Google+ give them immediate platforms from which they can broadcast their messages. Sure, there’s a lot of noise on these sites. But let’s say someone has a lot of followers and a big digital footprint—or, they’re savvy like Syed and opt to put some weight behind their complaint using a highly visible method like a promoted tweet. All it takes is the willingness to pay and the ability to compose a message and it’s out there—a dissatisfied customer’s rant for the masses to see. And that might mean your brand or business has a problem.

We’re not necessarily advocating that you monitor your social channels around the clock—although, depending on what industry you’re in, that might not be the worst idea, if you can afford the staff and associated resources. What is important, however, is to have a well-thought out strategic customer service policy in place that not only outlines schedules and responsibilities—it also guides employees in responding to disgruntled customers, provides examples of approved brand messaging and includes an action plan for escalated incidents that border on a brand crisis.

Equally important? Empowering your social customer service team to respond to customers in a compassionate manner—and not just with robotic, stock messaging. Because today’s consumers have more power and communication channels, brands do well to not only monitor those channels, but also to engage in a timely, personalized manner that not only shows customers that they’re listening, but (more importantly) that they care.

After all, as consumers, isn’t that what we all want? Think back to the last time you had a problem or complaint with a business. Didn’t you want that company to promptly acknowledge and fix the situation? Receiving a formulaic email, phone call or social media message doesn’t do much to quell your displeasure. Instead, we simply want to know that someone’s listening and that they care enough to do what’s needed (within reason, of course) to not only provide a fix, but also to keep us a customer.

Do situations like the one with British Airways prompt you to reexamine your company’s online customer service strategy or do you think it really doesn’t matter, that a pissed off customer will eventually just go away and people won’t pay any attention?